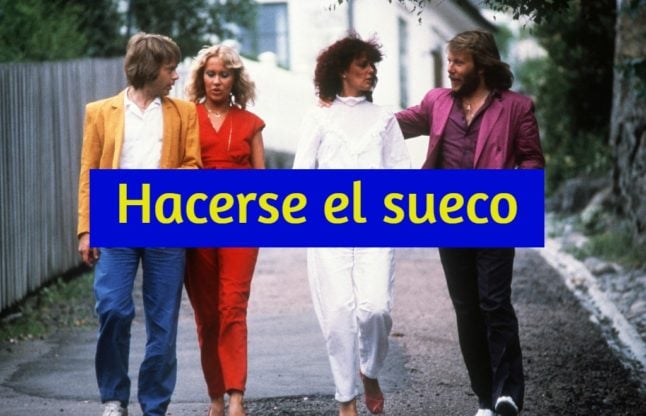 The Spanish expression hacerse el sueco means to play dumb or feign ignorance, but any Swedish readers should hold off from writing a stern letter of complaint to the Spanish embassy in Stockholm until they’ve read this article, at least.

That’s because sueco, which can mean “Swedish”, also refers to a type of shoe: the clog.

In fact, nowadays it’s written with z rather than a s – zueco – originating from the Latin word ‘soccus’.

These clunky wooden shoes were once worn by theatre comedians that performed during Roman times, and they’ve also been widely used for centuries in rural communities of northern Spain.

Spanish lexicographers such as José María Iribarren believe that the expression hacerse el sueco refers to the clog and not the Swedish people, as the shoes are associated with clumsiness. The Spanish word zoquete, which means dimwitted, also originates from ‘soccus’. So the expression would be ‘acting like a clog’ rather that ‘acting like a Swede’.

But then there are some who believe that the expression does refer to Swedish people, as there’s another expression with the same meaning, which is hacer alguien oídos de mercader (‘to do merchant ears’).

Therefore, there’s a theory that Swedish merchants arriving at ports in Spain either didn’t understand or pretended not to know what their Spanish counterparts were saying in order to get a better deal.

Whatever the true origins of this expression (the clog theory is more widely supported), if someone is pretending not to understand, deliberately avoids answering a question by changing the subject, doesn’t come to work to later claim they thought it was a public holiday, or acts as if they haven’t seen you in the street and walks past, they’re haciéndose el sueco. A similar expression is hacerse el loco, to ‘pretend to be crazy’.

There’s also the saying hacer oídos sordos, but this applies more to turning a deaf ear to something that’s been heard, whereas hacerse el sueco can refer to all kinds of ways someone is playing dumb or falsely claiming ignorance.

Hacerse el sueco and these other related expressions are not too colloquial and can be used in all social settings, but obviously keep in mind that you’re accusing a person of playing dumb.

Don’t play dumb! You know exactly what I’m talking about.

Did you see how he ignored us and feigned ignorance? We were right next to him.

You’re playing dumb, I’ve sent you ten messages and you didn’t reply to me because you couldn’t be bothered.