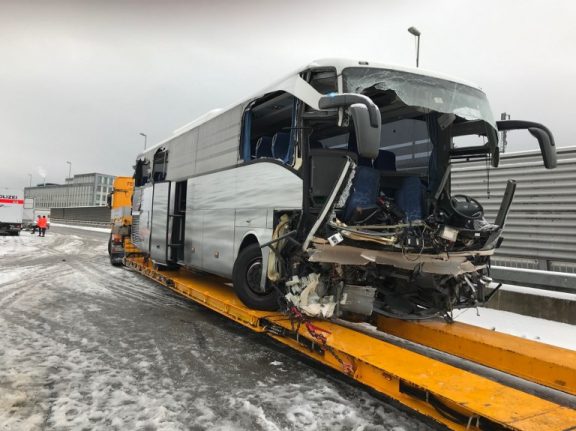 The front of the bus was severely damaged. Photo: AFP/Zurich Cantonal Police

The accident happened on the A3 motorway outside Zurich at roughly 4:15am, police in the canton said.

A 37-year-old Italian woman was killed. She has not been named by police.

A further three people were seriously injured including the vehicle's two Italian drivers, aged 57 and 61. The 57-year-old was driving at the time of the accident. Both men are still in hospital and the 61-year-old remains in critical condition.

Over 40 people were injured in total but 22 have since left hospital after receiving treatment.

A total of 50 passengers aged from 16 to 77 were in the bus at the time of the accident, police said in a third statement on the accident issued late on Sunday.

Seventeen of the passengers were Italian, including the woman killed. A further ten were from Russia, while there were five passengers from both Germany and Nigeria on board. Also on board were four Colombian passengers, two Albanians, a Romanian, a national of Jordan, a Ghanaian, a Benin national, a Swiss national and a citizen of Bosnia and Herzegovina.

The nationality of a further passenger is not known.

The cause of the crash was not immediately known. Investigations are now underway.

The vehicle, run by a subsidiary of the German-owned company Flixbus, was on route from the Italian city of Genoa to Dusseldorf, ATS news agency reported.

Swiss media reported the road was covered in snow at the accident site while Flixbus confirmed to the 20 Minuten news portal that the bus had been fitted with winter tyres.

The Swiss national on the bus was a 16-year-old teenage girl travelling to Zurich, Swiss media reported. She was said to be uninjured.