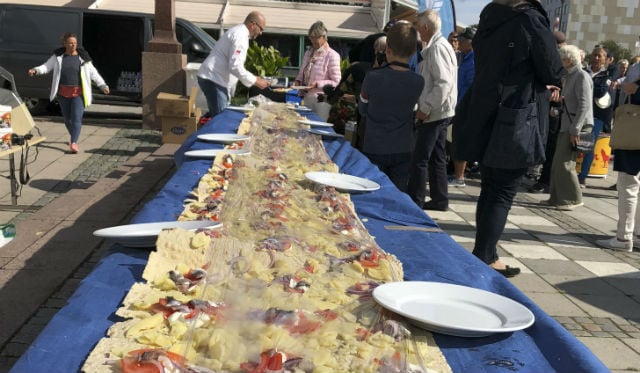 Oh, the smell! A full 25kg of surströmming was used to make the sandwich. Photo: Mjälloms Tunnbröd/TT
The High Coast, the coastline between Härnosand and Örnsköldsvik, is home to some of Sweden’s most loved brands of the potent fish delicacy.
The dish is traditionally eaten as a ‘surströmmingsklämma’, with the fish sandwiched between two sheets of a flatbread called ‘tunnbröd’, together with potato, sour cream, onion and dill.
READ ALSO: What you need to know before trying Sweden's fermented herring
“We had the idea a few years back to back the world’s biggest tunnbröd,” Torbjörn Ullsten, chief executive of Mjälloms Tunnbröd told Sweden’s TT newswire.
“And it wasn’t too much of an extra step to make it the world’s largest surströmmingsklämma, even if the category doesn’t exist in the record books.”
The bakery rolled out a giant ball of rye dough to 60m in length. This brought the area it covered to 26 square metres, beating the previous record of 15 square metres.
The sandwich was then filled with the herring, together with 100kg of potato and 8kg of butter.
The finished product was measured by a food technician with the evidence sent to the Guinness Book of World Records’ headquarters in London for verification.
READ ALSO: US herring video is 'an insult to Sweden' 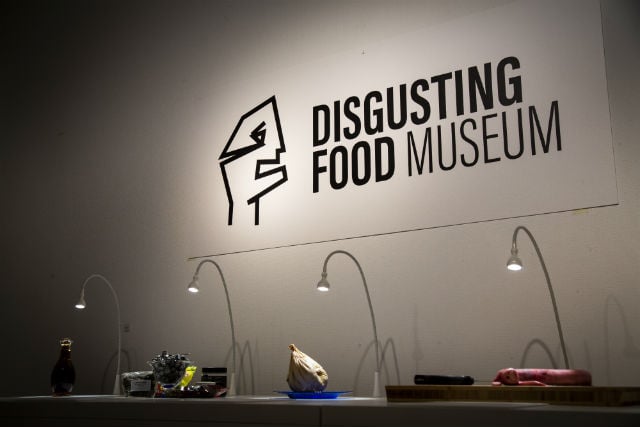 Some of the vile foodstuffs on display in Malmö. Photo: Anja Barta Thelin
The brainchild of Dr Samuel West, the American behind Helsingborg’s Museum of Failure, the new exhibition will bring 80 of the world’s most disgusting foods to Slagthuset MMX just behind Malmö Central station.
“The main aim is that it is fun, interesting, and interactive,” West told The Local. “You can taste, smell, and in certain cases, even touch the food.”
The museum features a raw bull’s penis on a cutting board, maggot cheese from Sardinia, and roasted guinea pig from Peru, with visitors receiving a tour of each continent’s most unappealing offerings.
Yummy! Bull penis from China. Photo:  Anja Barta Thelin
“The rotten shark from Iceland is absolutely horrid,” West said. “We have the world’s stinkiest cheese, proven by a British university. It’s hardcore science.”
But he said he hoped that the exhibition, like his failure project, would also get across a more serious point. “We need to question our ideas of disgust if we’re going to consider some of the more environmentally friendly sources of protein, like insects.”
West’s team, most of whom worked with him on the Museum of Failure, spent months working out how to contain the smell of some of the world’s stinkiest foods.
“There’s no ready-to-buy solutions for delivering nasty smells to people and trying to contain them,” West explained. “The best way is a simple medical-grade research jar.”
Containing the smell of Sweden’s fermented herring dish surströmming proved particularly difficult.
“We tested it, and tested it and were almost kicked out of our current office space because of the smell,” he said. “I think we’ve got it solved, but I’m not sure. It’s one of those things that keeps me awake at night.”
A smell jar. Photo: Anja Barta Thelin
West moved to Sweden when he was 21, learned to speak Swedish within a year, and has now lived in the country for 20 years, earning a doctorate in psychology and working as an organizational psychologist.
The Museum of Failure grew out of his research into innovation and risk-taking, and brought together failed product launches from around the world, including a Trump board game.
It has been a runaway success, with franchises now opened in Toronto and Los Angeles, and another soon to open in Shanghai.
“They’re both fun, but the food museum is much more relatable and much more interactive. You can only sniff failure to a certain extent. But if you have rotten shark in your face you wish you were never born.”
Fancy some soup? The main ingredient for Guam’s fruit bat soup. Photo: Anja Barta Thelin
The idea for the Disgusting Food Museum came out of the barrage of suggestions for new museums West has received over the last year.
“I started getting all these lists of the weirdest museums in the world,” he said. “And I thought that the only museum that I wanted to visit was the Museum of Disgusting Food.”
Initially, he intended to make the exhibit as simple and cost-effective as possible, but soon realised that for it to have maximum impact, about half of the items would have to be fresh, meaning they needed to be replenished every or every other day.
“The exhibit’s a pain in the ass, to be honest. When I was designing this, I was thinking ‘it has to be easy and economical, because I’m paying for it’. But which is more fun to look at, a plastic replica of some food or the real food in front of you? It’s just more fun to have a real durian fruit from Thailand.”
“It’s really fun and there’s a high risk of failure and if nobody shows up, I’m out a lot of money. A hell of a lot of money.”
The museum opens on October 31st and will run until the end of January.
SHOW COMMENTS
Url copied to clipboard!