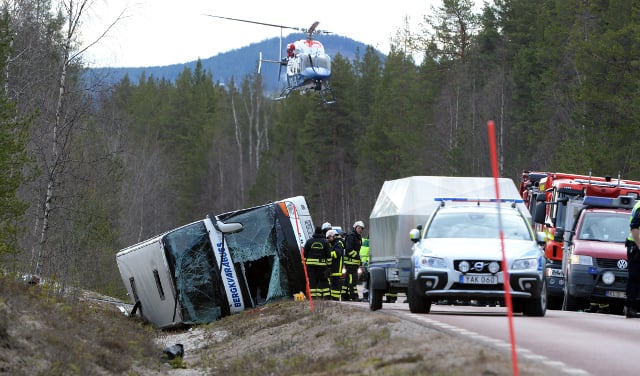 The bus had driven almost 600 kilometres overnight from Skene in south-western Sweden to Sveg further north when it ran into trouble and went off the E45 road at 7am on April 2nd.

The bus driver has said that potholes may have caused him to lose control of the vehicle.

Prosecutor Karin Johnson Ryd said the man is to be informed that he is formally suspected of reckless driving, causing bodily harm and involuntary manslaughter.

She said he was suspected on “good grounds”, the lower end of the degrees of suspicion in Swedish criminal law, and stressed that the investigation was still in the early stages.

“It is routine in these types of cases that a preliminary investigation is launched,” said the prosecutor in an official statement published by Sweden's prosecutorial authority.

“In this case, I have determined that the circumstances are such that criminal suspicion exists.”

The bus driver is set to be questioned, but the prosecutor said a date or time had not been set.

Trade union Kommunal said on Wednesday that it was involved in a lawsuit against the bus company, Bergkvara Buss.

“After the tragic accident the focus has been on the driver, who is one of our members and whom we of course represent, and we feel we have a responsibility to explain in the media debate how we view the company,” Kommunal spokesperson Johan Ingelskog told TT.

He said many of their members had complained about Bergkvara Buss.

“Many of our members tell of very tight schedules, stress and a generally poor working environment. And we are now preparing a rather extensive lawsuit agains the company in the Labour Court about foreign travel and contracted traffic of this kind,” he added.

A memorial ceremony will be held in Mark municipality on Thursday to remember the victims.

Three school children from the municipality died in the crash. Of the 59 people on board the bus – 52 young teenagers and seven adults – 23 were injured and taken to various hospitals. A 14-year-old girl remains in hospital with life-threatening injuries.