Tech workers at the cutting-edge Visualization Center C in Norrköping

East Sweden boasts some of the largest concentrations in Europe of several emerging industries – from the creation of sustainable and biodegradable electronics created using plant fibres, to the development of ‘smart cameras’, that can make their own decisions on what to focus on when filming.

This status as a centre of innovation is the result of a decade-long strategic plan. It is designed to place East Sweden at the ‘bleeding edge’ of research and development – not only across Sweden, but across Scandinavia.

Niklas Tideklev, Process leader, Team Innovation at Region Östergötland, told us: “Here we have five areas we specialise in – visualisation, smart and connected systems, advanced materials, logistics and environmental benefits for business. Each area is catered to by one or more innovation hotspots.”

Such hotspots include the Science Parks in Linköping and Norrköping. These exciting locations are places where startups and established sector leaders meet academia, providing space for collaboration. Others, like Visual Sweden and the Innovative Materials Arena, encompass the entire Linköping/Norrköping metropolitan area, hosting regular events, conferences and hackathons for business and researchers in their area of specialisation.

Some of the world’s biggest innovators in their fields, gathered in one vibrant region. Explore the opportunities available for professionals in East Sweden

“One of the most exciting areas on which we focus is visualisation – the field of bringing different sources of data together visually in such a way that we can use them to make decisions,” says Niklas.

The region boasts over one hundred different companies that work together on optics, image analysis and computer technology that allows large-scale simulations.

“Within this cluster, they are doing fascinating things with what are called ‘digital twins’. These are exact virtual models of places and objects. Think of them like an incredibly complex computer simulation.

“We now have a ‘digital twin’ of Norrköping. The entire city has been recreated, down to street level. It lets us answer questions about what kind of buildings we can use, and how we can improve traffic flow. We can see exactly how things will work before we do anything in the real world. Very cool!

“In another cluster, we have companies using lignin, a material found in plants to print circuitry and create single-use electronics. Compared to plastic, it’s cheaper, wearable – and biodegradable!”

So who are the kind of professionals that are contributing to East Sweden’s success? 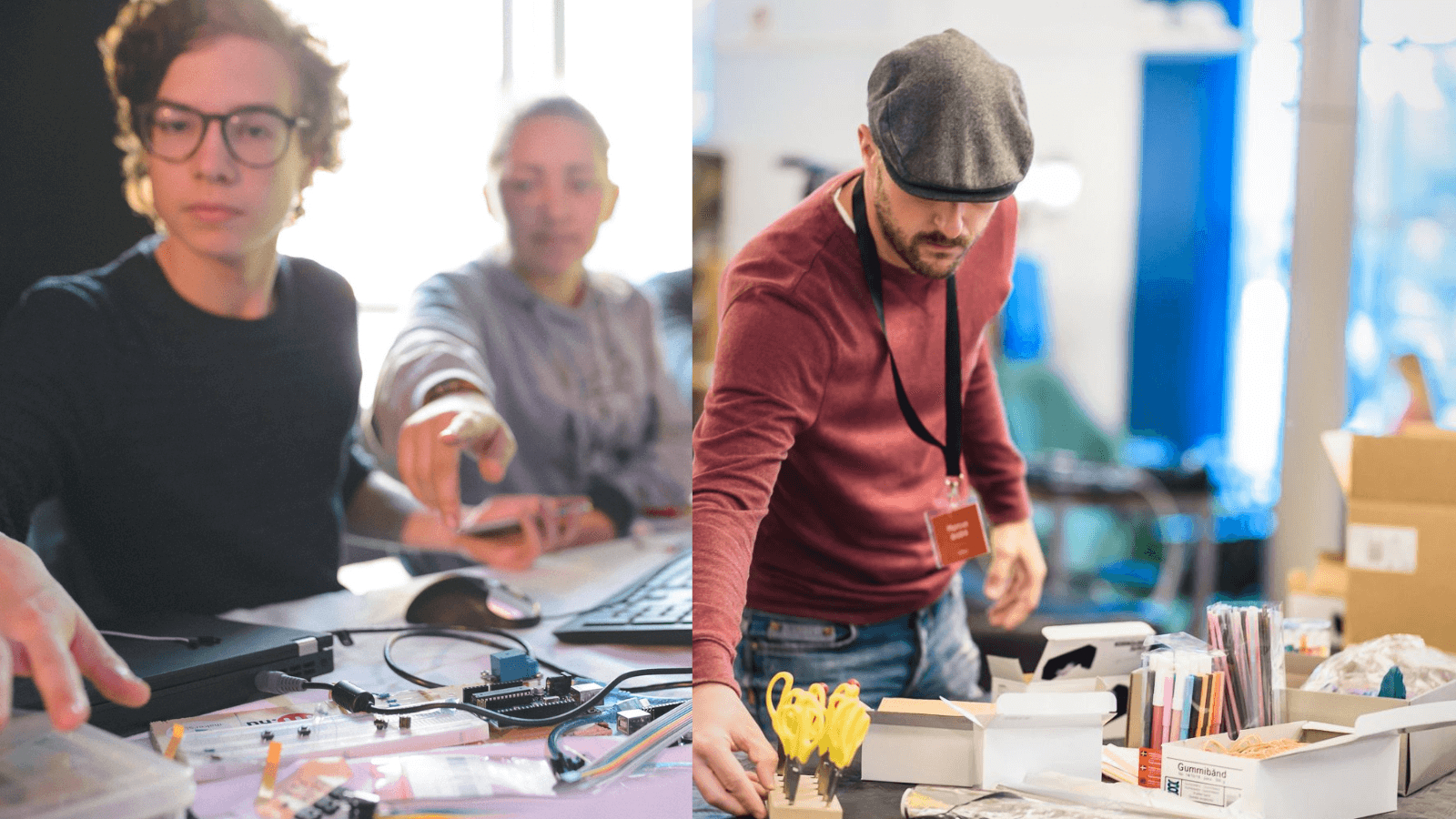 Spark of invention: Innovation hotspots across East Sweden regular hold hackathons to push the boundaries of what is possible: Photos: Crelle/East Sweden

Czech Pavel Schoffer came to Sweden five years ago, to work as a programmer. Originally working for Klarna in Stockholm, Pavel and his family made the decision to move to Östergötland.

“We moved when my wife, who is an ophthalmologist, found a job in Norrköping. At that point, I decided to start working remotely and I founded my own software company.

“Soon, I joined the Norrköping Science Park – it’s a coworking space and a thriving community of startups, coders and other tech professionals. I work remotely mainly for a US company called Automattic, and I spend a lot of time at the park.

“It’s great because when I am there, I am able to get involved in meet-up groups that focus on topics like coding and coming up with ideas to collaborate on. There are so many opportunities for networking and sharing ideas on a daily basis.”

As for life outside the workplace, Pavel couldn’t be happier.

“Norrköping is a town that is exactly the right size for me. Stockholm was a little bit too large. It could sometimes be hard to meet people, and it took a while to get anywhere. Here, you can just walk or cycle to where you want to get to. It is big enough that there is always something happening, new people to meet, and there is also a lot of beautiful scenery to enjoy, which is very important to me.

“We also have two small kids that go to a really good preschool. I need to start taking lessons, because my kids are now speaking Swedish! Compared to the Czech Republic, it’s much easier to find a good school place for our kids and that was a huge draw for me.” 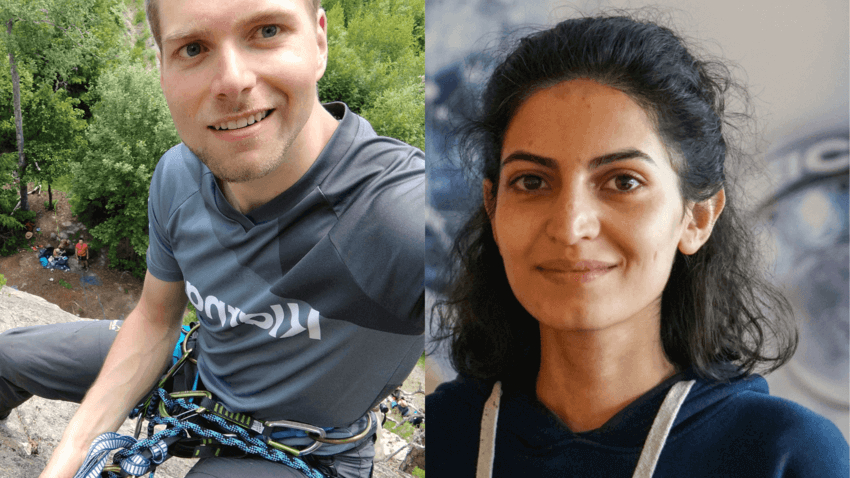 Pavel Schoffer and Sogand Talebi are two of the tech professionals drawn to the East Sweden region. Photos: Supplied

Sogand: A better way of living

Sogand Talebi, from Iran, found a job in East Sweden within the cluster focusing on visualisation. Now she’s now working in Linköping on cutting-edge technologies that have a huge range of applications.

“After studying in Iran and Italy, I’m a software developer now, working at a company called SICK. We work on ‘sensor intelligence’ cameras that use AI-powered algorithms when they are filming, to know what to focus on. They are used in very different applications, such as retail logistics, airport security and traffic management. It is very interesting work, and I feel like I belong there.”

Like Pavel, Sogand’s transition to living in East Sweden has been very smooth.

“We have plenty of initiatives at work to make us feel welcome, things like after-work parties and chess competitions. I’m taking Swedish classes and I’m starting to make both Swedish and international friends.

“I find it easy to get around – especially on a bike. You can get almost anywhere, because there are plenty of bike paths all across Linköping. There is also good public transportation.

“The quality of life is wonderful. The efficiency of transport, the quality of housing, the variety of what you can buy in supermarkets, it’s fantastic. It was really surprising and pleasing, compared to my time in Italy and Iran.”

A major reason that Pavel and Sogand have found such a home in East Sweden is careful planning and design. A significant part of East Sweden‘s efforts in attracting and keeping the best talent has been making it the ideal place to live.

While East Sweden is a region of great natural beauty, with plenty of room to settle, it is the infrastructure put in place that is attracting tech professionals.

Preschools, child care and schools – including several international ones – are plentiful, and healthcare is of a very high standard, drawing on research institutions such as Linköping University Hospital.

Live life in East Sweden at your own pace, while working on some of the world’s most exciting tech projects. Find out how Östergötland can make that happen

Having already experienced tremendous growth, the East Sweden region has developed road maps for growth for the five specialisations that reach into the next decade. Central to this is a continued commitment to creating the kind of living and working environments that brought Pavel and Sogand to the area.

East Sweden will also benefit from both the Swedish government and the private sector’s massive investments in infrastructure and energy. Significant amounts of money have been announced in the last year to create faster, more efficient links to the rest of the country, while new solar parks and onshore wind farms will ensure cheaper, cleaner energy across the region.

Along the way, East Sweden is betting on the industries and professionals it has attracted returning on that investment, delivering some of the research, technologies and products that will help shape the world in coming decades.

Discover what East Sweden has to offer you as a technology professional, and embrace a lifestyle that gives you room to grow, while making the future happen