Italy's testing of arrivals from China would be “ineffective if not followed at a European level”, Prime Minister Giorgia Meloni told her year-end press conference in Rome on Thursday. (Photo by Tiziana FABI / AFP)

The European Commission was debating a bloc-wide response to the end of China’s zero-Covid containment measures on Thursday, following Italy’s adoption of mandatory testing for all travellers arriving from China.

Italian Prime Minister Giorgia Meloni continued to push for a common approach from EU member states as she revealed that Italy’s testing so far had not found any new coronavirus strains.

Those who have tested positive so far are carriers of “Omicron variants already present in Italy”, Meloni told her end-of-year press conference on Thursday afternoon.

Italy ordered tests on all arrivals from China on Wednesday following an explosion in cases reported by Beijing.

Meloni said the screening policy would be “ineffective” if not done on a European level, as only people arriving on direct flights from China were being tested in Italy, not those with stopovers.

She called for the EU to follow Rome’s move to test all air arrivals from China for coronavirus, and said Health Minister Orazio Schillaci would be pushing for the EU to roll out bloc-wide screening.

Schillaci said testing arrivals was “essential to ensure the surveillance and identification of any variants of the virus in order to protect the Italian population”.

READ ALSO: Why has Italy ordered Covid tests for all arrivals from China? 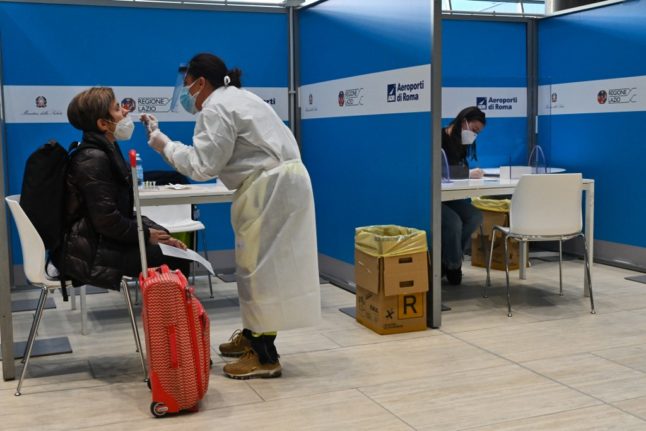 A passenger undergoes Covid testing at Rome’s Fiumicino airport. All travellers from China must undergo Covid testing on arrival in Italy, the goverment announced on Wednesday. (Photo by ANDREAS SOLARO / AFP)

Rome’s Spallanzani hospital for infectious diseases had warned on Wednesday that “in a country [like China] with a high percentage of unvaccinated people, in which ineffective vaccines have been used that give low population protection, such a strong exponential growth in infections could generate the selection of a new variant, much more immune-evasive and transmissible”

Milan’s Malpensa airport reported on Wednesday that almost half of all passengers arriving on flights from China had tested positive.

Those who test positive on arrival are required to isolate for at least five days, the health ministry confirmed.

Italy was the first European country to be hit by coronavirus in early 2020, introducing first a nationwide lockdown and then compulsory vaccines for certain people.

Meloni’s post-fascist Brothers of Italy party, which won September elections, had strongly criticised the restrictions when in opposition, and has sworn to take a different approach since taking power.

Coronavirus infections have surged in China as it unwinds hardline controls that had torpedoed the economy and sparked nationwide protests.

But a growing number of countries, including the United States, have imposed restrictions on visitors after China’s decision to end mandatory quarantine on arrival.

Health officials from the European Union’s 27 countries met on Thursday to “discuss the Covid-19 situation in China and possible measures to be taken in a co-ordinated way”.

“Co-ordination of national responses to serious cross-border threats to health is crucial,” the committee said after the meeting had concluded. “We need to act jointly and will continue our discussions.”

At the time of publishing no other EU member states have said that they intend to follow Italy’s lead, although French President Emmanuel Macron has asked his government to take “protective measures”.