“We are in the process of asking the NATO Secretary General to set up a coordination office for the protection of underwater infrastructure,” German Chancellor Olaf Scholz told a press conference in Berlin.

“We take the protection of our critical infrastructure very seriously and nobody should believe that attacks will remain without consequences,” he said.

Norwegian Prime Minister Jonas Gahr Store said the alliance would be “an informal initiative to exchange between civilian and also military actors” with NATO providing “a centre, a coordination point”.

Underwater cables and pipelines were “arteries of the modern economy” and it was necessary to create “a coordinated joint effort to ensure security for this infrastructure”, he said.

Scholz said he and Store would propose the plan to NATO Secretary General Jens Stoltenberg, who is due in Berlin for a security conference. The Nord Stream 1 and 2 gas pipelines off the Danish island of Bornholm were targeted by two huge explosions at the end of September.

The pipelines, which connect Russia to Germany, had been at the centre of geopolitical tensions as Moscow cut gas supplies to Europe in suspected
retaliation to Western sanctions over the invasion of Ukraine.

Although they were not in operation when the leaks occurred, they both still contained gas which spewed up through the water and into the atmosphere.

Russia and Western countries, particularly the United States, have traded bitter barbs over who is responsible for the blasts.

Several European countries have since taken steps to increase security around critical infrastructure.

The G7 interior ministers warned earlier this month at a meeting in Germany that the Nord Stream explosions had highlighted “the need to better protect our critical infrastructure”.

Norway has become Europe’s main gas supplier in the wake of the war in Ukraine, taking the place of Russia.

The Scandinavian country has a vast network of pipelines, stretching for almost 9,000 kilometres, linking it to the continent, which experts have said are at risk of sabotage. 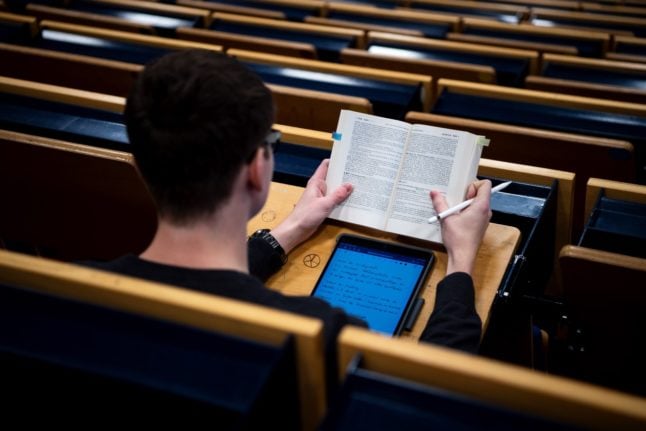 Matthias Anbuhl, chairman of the board of the Studierendenwerk (Students’ Union), told the Stuttgarter Zeitung on Friday that ministers needed to finally “deliver” on the long-delayed payout for students and trainees.

In September, the federal government had signaled that students would be getting a €200 payout as part of a wider relief package to help people with rising costs.

READ ALSO: Why students in Germany are still waiting for €200 energy payout

“They haven’t received anything yet, although they now have the higher costs for gas and electricity,” Anbuhl added.

Warning politicians to be clear about when the energy payment would arrive, Anbuhl said the long delays in rolling out the payment risked gambling away students’ trust.

According to Federal Education Minister Bettina Stark-Watzinger (FDP), students in Germany shouldn’t have to wait too much longer to get a boost.

“We are entering the home stretch on this,” the FDP politician told DPA on Wednesday. A spokesperson for the ministry did not want to give a concrete date for the start of the payments, but Stark-Watzinger has previously said it would happen in winter.

The major issue in delivering the relief payments has been the lack of a central database that records the bank account details of students. The federal government and the states are now trying to bring this data together on a joint online platform so that the money can be applied for centrally there.

READ ALSO: What students in Germany should know about the €200 energy payout

However, the opposition Left Party slammed the government for the lengthy delays and the fact that students were therefore unable to plan financially.

“What Education Minister Stark-Watzinger and her ministry are doing here is simply embarrassing,” the party’s co-chair, Janine Wissler, told DPA.

The enormously high gas and electricity bills were no trifling matter, she said, adding that many were in urgent need of payment.

“She must now clarify whether the end of winter means the calendar winter, the meteorological winter or simply a ministerial winter,” said Wissler.