Here's the story of how France ended the death penalty. Photo by mailme6 / Pixabay

Roger Bontems, 36, was beheaded for being an accessory to the brutal murder of a nurse and a guard during a break-out attempt at a prison in eastern France.

Seven minutes after he was decapitated in the courtyard of La Sante prison in Paris, his co-conspirator Claude Buffet – a 39-year-old man convicted of a double murder that had sent shockwaves through France – met a similar end.

Among the witnesses of the executions was Robert Badinter, a crusading young lawyer who was haunted by his failure to save the life of his client Bontems.

In a 2002 interview, Badinter, who, as justice minister, famously defied a hostile French public to abolish capital punishment in 1981, revealed that for a long time after Bontems’s death, “on waking around dawn, I would obsessively mull over why we had failed”.

“They had accepted that he had not killed anyone. Why, then, did they sentence him to death?”

Knives made from spoons

In September 1971, Buffet, a hardened criminal who is serving a life sentence for murder at Clairvaux prison, convinces fellow inmate Roger Bontems, who is serving a 20-year term for assault and aggravated theft, to join him in a high-stakes escape attempt.

The pair fake illness and are taken to the infirmary where, armed with knives carved out of spoons, they take a nurse and a guard hostage.

They threaten to execute their captives unless they are freed and given weapons.

This precipitates a standoff with the authorities that keeps the French glued to their TV screens until police storm the prison at dawn and find both hostages dead, their throats slit.

Calls for heads to roll

The grisly murder of the nurse, a mother of two, and the prison warden, father of a one-year-old girl, sparks an impassioned debate about the death penalty, which has not been implemented since President Georges Pompidou, a pragmatic Gaullist, came to power two years earlier.

Hundreds of people baying for the mens’ heads pack the streets outside the courthouse when they go on trial in Aube in 1972. The nurse’s husband and warden’s family are among those attending.

Buffet, who is portrayed in the media as a heartless monster, admits to killing the guard and stabbing the nurse, and defies the court to sentence him to death.

Bontems is found guilty of merely being an accessory. But he is also given the death penalty, amid intense pressure from prison wardens’ groups seeking revenge for their colleague’s death.

Badinter appeals to the highest court in the land not to apply the law of “an eye for an eye”, and then to Pompidou, who has pardoned six other death-row prisoners.

His pleas fall on deaf ears in the face of a poll showing 63 percent of the French favour capital punishment.

An activist is born

On November 28, 1971, Bontems and Buffet are beheaded in the courtyard of La Sante prison, under a giant black canopy erected to prevent the media snapping pictures from a helicopter.

Badinter, whose Jewish father died in a Nazi death camp, would later say the case changed his stance on the death penalty “from an intellectual conviction to an activist passion”.

“I swore to myself on leaving the courtyard of la Sante prison that morning at dawn, that I would spend the rest of my life combatting the death penalty,” Badinter told AFP in 2021.

Five years later he helped convince a jury not to execute a man who kidnapped and murdered a seven-year-old boy, in a case that he turned into a trial of the death penalty itself.

Badinter called in experts to describe in grisly detail the workings of the guillotine, which had been used to decapitate prisoners since the French Revolution of 1789.

In all, he saved six men from execution, eliciting death threats in the process.

“We entered the court by the front door and once the verdict had been read and the accused’s head was safe, we often had to leave by a hidden stairway,” the man dubbed “the murderers’ lawyer” by his detractors, recalled.

When he was appointed justice minister in President Francois Mitterrand’s first Socialist government in June 1981, he made ending the death penalty an immediate priority.

Its abolition was finally adopted by parliament on September 30, 1981, after a landmark address by Badinter to MPs.

Decrying a “killer” justice system, he said: “Tomorrow, thanks to you, there will no longer be the stealthy executions at dawn, under a black canopy, that shame us all.” 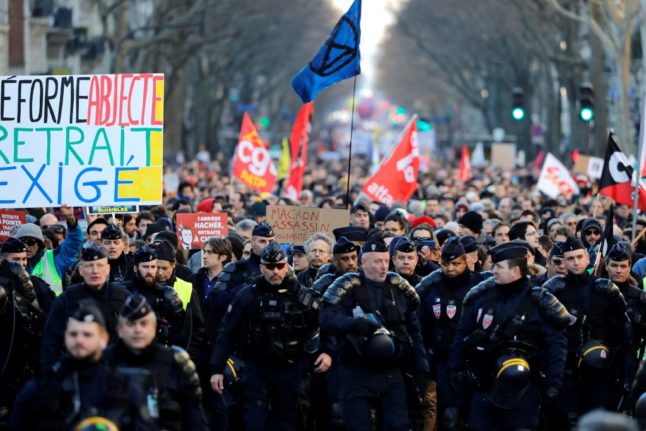 The government and the unions are squaring up for battle over plans to reform the pension system and raise the retirement age to 64 – with the first day of action called for Thursday, January 19th.

French unions have a good historical record when it comes to blocking pension reform – former presidents including Jacques Chirac and Nicolas Sarkozy were forced to drop or at least modify plans for pension reform after furious protests and strikes.

You can hear us discuss the strikes on the latest episode of the Talking France podcast, download it HERE or listen on the link below.

However the unions’ more recent record is less good – two months of strikes in 2019/20 did not succeed in stopping Emmanuel Macron’s first pension reform, while the most significant social movement of recent years – the ‘yellow vests’ – took place without union involvement.

So have France’s once mighty unions lost their power?

January 19th is the first strike day, and has been billed by unions as “the first day of mobilisation” with more to come – strikes and other protests are expected to continue until March, when the pension reform bill comes before parliament.

Unions have promised the ‘mother of all battles’ to defeat the planned pension reform, and it begins on Thursday, January 19th with a one-day strike and demonstrations in towns and cities across France.

The disruption to services – especially trains, Paris public transport and schools – looks likely to be significant, but there is another marker for the success of the action; how many people turn out for the demos.

John said: “The trades unions have set themselves up either for a big success or a big failure again on Thursday – they’re saying that want a million people on the streets and have set that as the benchmark for success or failure.

“They will of course claim there were a million people out whether there are or not, but there are ways of knowing how many people were there.

“If the turnout isn’t close to a million people I think that will be a success for the government, a sign that the mood of the country is against this reform but kind of resigned at the same time and not really willing to support the kind of long, guerrilla action that some of the unions are talking about.”

Crucially, however, workers do not have to be members of a union in order to strike.

John said: “I’ve always said that you should view French unions more like political parties – they represent a point of view which goes beyond their actual membership and that’s why it is important for them to win the battle.

“They’re now facing a battle with their own memberships as well who have come to disregard or disrespect the central management of the unions and often take action of their own.”

France has eight union federations and they represent different political views – from the moderate CFDT to the radical CGT and Sud.

Hardline unions like the CGT are far more likely to call strikes – and to take direct action such as blockading refineries, cutting off power to sports grounds (as happened during the 2019 pension strikes) and cutting off power to the homes of politicians who back the pension reforms (as they have threatened to do this time, although it is unclear whether this is actually possible).

Their pronouncements tend to make headlines, but the fracturing of unions along political lines means that each union only represents a small portion of train drivers, teachers etc and therefore union actions only have real impact on services when they work together.

Pension reform is one of the few issues that can unite all eight of the union federations, and this is one of the reasons why pension protests tend to be big.

John told us: “One thing this time is that the eight federations are united – it’s rare for them to be all united because they have differing political views, but they are all united this time. The more moderate CFDT and CFTC are involved along with the militant ones like Sud and CGT.

“To what extent they will all stay involved to the bitter end is another question.”

Another crucial aspect for a successful protest is strong support from the public. Although most polls suggest that the French public are strongly opposed to raising the retirement age, support for strikes is less clear cut.

John said: “The public mood is very difficult to read and the polls are very strange in some ways. Around 60 to 70 percent of people are against this reform but not necessarily all reforms of the pension system – I don’t know what they have in mind apart from this – around 50 percent say they support the idea of fairly strong industrial action to stop the reforms.

“But it’s whether those people will turn out in big numbers that is the crucial question.”

It’s perhaps significant that one of the biggest social movements in France in recent years had no union involvement – the ‘yellow vest’ protests grew out of Facebook groups and other online forums and had no formal organisation structure.

Many of the protesters’ complaints, such as the high cost of living and insecure working conditions, were core issues for the unions, and yet attempts by union leaders to get involved in the movement were largely rebuffed.

At the same time, unions themselves have seen a growth in ‘wildcat’ strikes and unauthorised actions by members at a local level, and have experienced difficulty in keeping control of actions.

John said: “There’s now a new trend in France for small groups of trade unionists in a particular place to start taking action on their own without the involvement or the blessing of the union headquarters in Paris.

“For instance the oil refinery strikes in October last year that saw filling stations across the country run dry were something that was out of control, really, of the CGT union bosses in Paris and was run by militant figures at a local level.

“This time you already see those same workers talking about closing down refineries or reducing the output of refineries if this reform is pushed ahead with, which it will be.

“There are some who fear that will happen again this time and this whole movement will spill out of the control of the unions and therefore out of control of the government so it’s a very difficult one to read.

He added: “Overall, how strong are French unions? On paper, not really. In reality, they have proved they can bring the country to a halt if they are all united. They might be able to do it again this time, but they have a lot of internal battles and weaknesses to confront as well.”