People queue up to get food next to Aluche neighborhood association local in Madrid on November 19th 2022. (Photo by PIERRE-PHILIPPE MARCOU / AFP)

“We see prices increase every week, even for basic goods,” he told AFP as he stood before wooden crates of fruits and vegetables at the entrance of a residential building in Madrid.

Driven by the war in Ukraine, Spanish food prices jumped 15.4 percent in October from a year earlier, their biggest increase in nearly three decades, according to the National Statistics Institute.

In a bid to ease the pressure on squeezed households, Socialist Prime Minister Pedro Sánchez’s government — which faces an election next year — has spent billions of euros on extra welfare spending.

Every Saturday Ramírez, who is from Venezuela, comes to this food bank set up by a neighbourhood association in the working-class district of Aluche during the pandemic to pick up food supplies.

After paying their monthly rent of €800 and €300 for utilities “there is not much left,” he said. 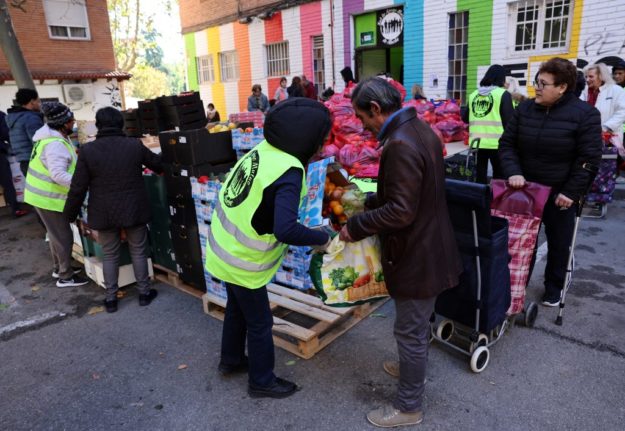 Driven by the war in Ukraine, Spanish food prices jumped 15.4 percent in October from a year earlier, their biggest increase in nearly three decades, according to the National Statistics Institute. (Photo by PIERRE-PHILIPPE MARCOU / AFP)

The line of people seeking help stretched far down the street. Many of them are immigrants.

Similar lines, dubbed “hunger queues”, can be seen regularly outside of other food banks across the country.

“Every week we see new families in need, especially since the start of the war in Ukraine” in February, said Raul Calzado, a volunteer with the Aluche neighbourhood association.

Some mothers have stopped buying feminine hygiene products to be able to feed their children, he added.

The association currently offers aid to 350 households, a number Calzado expects will rise to around 400 by the end of the year.

Behind him dozens of other volunteers are busy at work, surrounded by boxes of pasta, canned goods and baby diapers.

“Some beneficiaries have no revenues. But we also have more and more retirees with small pensions or people who work but whose salaries are insufficent,” said the association’s vice president, Elena Bermejo. 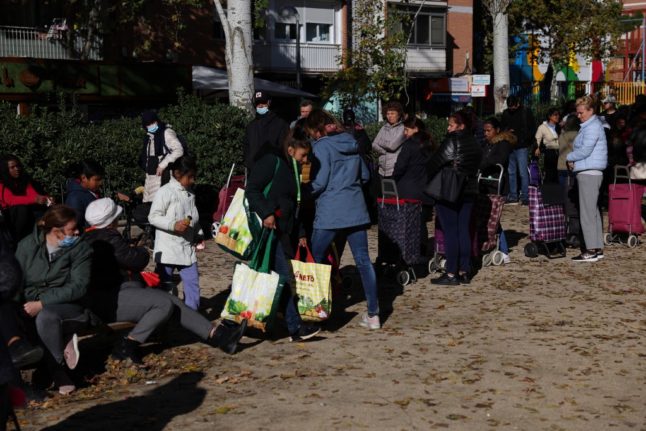 One in seven homes in Spain suffers food insecurity, meaning inadequate or insecure access to food due to low income. (Photo by PIERRE-PHILIPPE MARCOU / AFP)

Among the measures Spain has introduced are subsidies for transport, a one-off payment of €200 for the unemployed and a 15 percent increase in pensions for the most vulnerable such as widows.

But charities that work with the poor say the measures are not enough.

“For some families, even buying a litre of olive oil or a kilo of lentils has become difficult,” said Bermejo.

Food banks, which had started to see dome relief as people returned to work after pandemic shutdowns, are struggling to meet the growing demand.

“With inflation, we are seeing a decrease in donations” since people have less money, said the spokesman for the Spanish Federation of Food Banks, Luis Miguel Rupérez.

The federation collected 125,000 tonnes of food since January, compared to 131,000 tonnes during the same time last year.

Food banks provide help to over 186,000 people in the Madrid region, and 1.35 million in total in Spain — roughly the same population as Barcelona, the country’s second biggest city.

One household in seven in Spain suffers food insecurity, meaning inadequate or insecure access to food due to low income, according to a study published earlier this year by the University of Barcelona.

“I hope it will get better but I’m afraid that won’t be the case,” said Ramírez as he clutched a bag of groceries from the food bank.

The report showed that the four poorest neighbourhoods in Spain can all be found in the cities of Seville and Alicante.

The barrios (neighbourhoods) are Polígono Sur and Los Pajaritos y Amate in Seville and Juan XXIII in Alicante.

Those in Seville’s Polígono Sur earned the least amount with an average of just €5,666 per year. In fact, other areas in both Seville and Alicante appeared again on the list of the ten next poorest neighborhoods in the country with those in Seville being listed six times out of the top 15.

All but four of the poorest ones were located in Andalusia, with the others are found in Alicante, Madrid and Murcia.

This is the complete list of the 15 neighbourhoods with the lowest income per capita in Spain, according to the latest available data, collected in 2019:

Sevillian towns such as Los Palacios – Villafranca and Lebrija and Alicante towns such as Torrevieja and Crevillente were also included in the top 20 poorest places with over 20,000 inhabitants.

Interestingly, both provinces are among those that received the least investment in infrastructure from the General State Budget (PGE) between 1985 and 2018, according to a list of the Independent Authority for Fiscal Responsibility (AIReF), which takes into account the number of inhabitants for its calculation.

This may be about to change in Seville capital, however, which has received investments for the SE-40 ring road, the Centennial bridge and metro line 3 as part of the 2023 State Budget.

No extra investments have been given out to Alicante though, which “has one of the lowest per capita incomes in Spain, occupying position 44 out of 52,” the document stated. In terms of investment, the Alicante province receives less than de €85.40 per inhabitant.

The correlation between low investment and poor towns also occurs in Andalusian provinces such as Cádiz and Huelva, which are also among those that have received the least investment in infrastructure from the PGE between 1985 and 2018, according to AIReF.

Towns in Cádiz and Huelva are also among the INE’s list of places with the poorest neighbourhoods, in addition to Almería, which received a mediocre amount of investment.