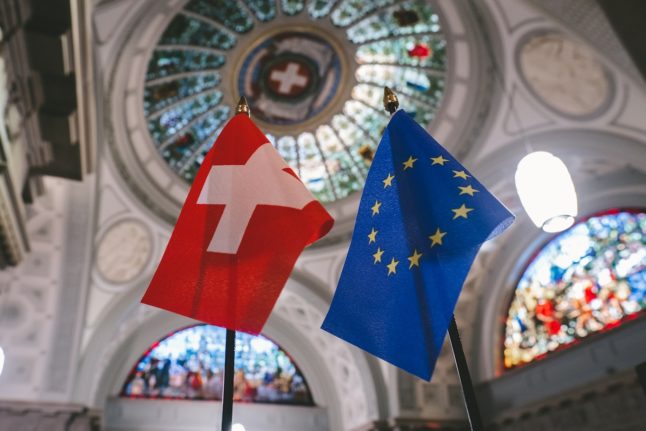 Swiss and EU flags fly side by side in Bern. Photo by Christian Wasserfallen on Pexels

British media reports have claimed that some people inside the UK government want to see post-Brexit Britain pursue a relationship with the EU along the lines of Switzerland. So what’s this partnership based on?

One way to describe Switzerland’s relationship with the EU is this: it doesn’t want to be part of the bloc, but it can’t live without it either.

“Switzerland  has a very strong sense of independence; joining the EU would impinge on its autonomy,” according to political scientist Daniel Warner, former deputy to the director of The Graduate Institute of International and Development Studies in Geneva.

To date, Switzerland is one of only a handful of western European nations that have not joined the European Union, and yet it has strong ties with the bloc.

In 1992, Swiss voters narrowly rejected (by 50.3 percent) the government-backed plan to join what was then the European Economic Area of 12 nations.

The main argument that swayed the voters was that the country’s unique grass-roots democracy would be undermined if political decisions affecting Switzerland were made in Brussels rather than in Bern.

That particular argument also held true in 2001, when nearly 77 percent rejected the proposal to open membership negotiations with the EU.

Sometimes, Switzerland’s refusal to join its neighbours smacks of arrogance.

“Switzerland is too rich and too stable to want to join the EU,” said Fabio Wasserfallen, a professor of European politics at the University of Bern.

READ MORE: EXPLAINED: Why is Switzerland not part of the European Union?

However, despite its long-standing stance of neutrality and sovereignty, which fuels its opposition to joining the Union, Switzerland can’t exist without its European neighbours. And it knows it.

There are several reasons for this dependence.

One is that exports are the backbone of Swiss economy, with the EU and in particular Germany, being Switzerland’s main trading partners.

Switzerland relies on its access to the single market in other ways as well, all of which play a major part in the country’s economic prosperity. For this reason, Bern and Brussels have signed over 100 reciprocal treaties, covering not only trade, but also matters of cross-border security, research and education, agriculture, transport, environment, police cooperation, and a number of other agreements, which are outlined here.

One of the major ones is the Free Movement of Persons Agreement, which allows citizens of EU states to freely work and live in Switzerland, and vice-versa.

Another makes Switzerland part of the borderless Schengen area, making travel though Europe much easier and more convenient for Swiss citizens.

READ MORE: EXPLAINED: Which Schengen area countries have border controls in place and why?

What concessions has Switzerland made to get access to EU’s “perks”?

The cooperation between Bern and Brussels sometimes causes discontent on both sides.

In Switzerland, some people, especially right-wing parties such as the SVP and other populist groups like the recently formed Pro Schweiz, argue that the country has no business seeking stronger ties with Europe, at the detriment of its independence.

READ MORE: ‘Pro Schweiz’: What is Switzerland’s new anti-EU organisation and what is its aim?

On the EU’s side as well, some claim that Switzerland is ‘cherry-picking’ — that is, taking advantage of its nearly unlimited access to the single market without actually being part of it, basically taking the good bits and leaving the negative ones behind.

However, according to its agreement with the EU, the country does pay for the benefits it receives from its non-membership.

Take, for instance, the ‘cohesion payments’.

They are basically “entry fees” that Switzerland pays to Brussels for its access to the single market.

According to the government, “the goal of Swiss contributions to selected EU member states is to help reduce economic and social disparities… The Swiss contribution is an investment in Europe’s security, stability and prosperity. By making the contribution, Switzerland is also strengthening and deepening bilateral relations with its partner countries and the EU as a whole.”

This year, for instance, Swiss government handed over 1.1 billion francs to eight EU states as part of the latest “cohesion payment”.

The eight states set to benefit from the money are: Bulgaria, Croatia, Cyprus, Estonia, Hungary, Malta, Romania and Poland.

READ MORE : What are the ‘cohesion payments’ Switzerland pays to the EU? 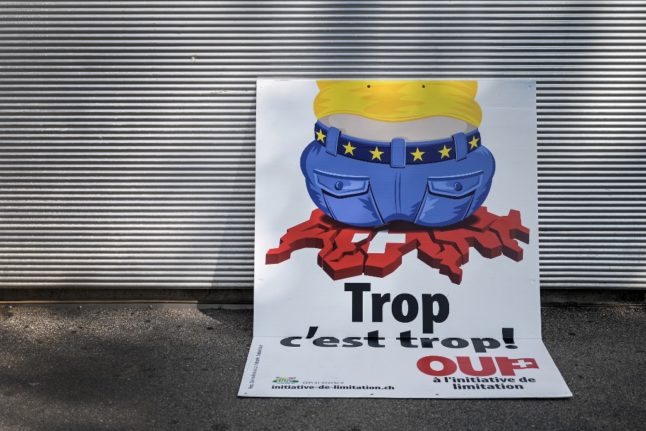 The populist SVP, Switzerland’s largest party, set out its asylum policy with nine months to go until the 2023 general election.

“Switzerland is working towards its own disappearance,” SVP president Marco Chiesa told a press conference in the capital Bern.

“This is why we must finally put a stop to this immigration which is disproportionate and harmful to our country.

“The problem is that not only are too many immigrants coming to Switzerland, the right ones are not coming,” he added.

“We can end the asylum chaos and defend our legal system, our values and our culture.”

The SVP wants asylum procedures to be transferred to centres located outside the wealthy Alpine nation.

“As part of a new aid and protection policy, Switzerland could financially and logistically take part in running reception and protection centres in crisis regions,” the SVP said in a position paper, citing UN refugee camps as an example.

The party also cites Britain’s plans to send asylum seekers who have arrived illegally to Rwanda, and believes cooperation with countries such as Britain, Austria and Denmark should be looked at in detail.

Landlocked Switzerland is one of the 27 states in Europe’s Schengen open-borders zone, leaving it without passport checks on surrounding countries France, Germany, Italy, Austria and Liechtenstein.

To prevent “illegal entries”, the SVP wants to create transit zones, notably at airports, in which asylum seekers can submit their applications.

REVEALED: Most immigrants choose not to stay in Switzerland long term

“Asylum seekers would therefore not be on Swiss territory and could be sent back directly to the country from which they wanted to enter Switzerland, if the decision is negative,” the position paper said, with an eye on the Australian model.

In 2022, around 24,500 people sought asylum — nearly two-thirds more than in 2021. The main countries of origin were Afghanistan and Turkey.

And since the Russian invasion of Ukraine last February,  75,000 Ukrainians have obtained special temporary protection.

Switzerland expects the number of asylum seekers to be above average in 2023 at between 24,000 and 40,000, not including Ukrainians.