Almost every region in Spain offers a great array of hiking routes, but perhaps some of the best and most diverse can be found in the northeastern region of Catalonia, where you have the Pyrenees in the north, the coast to the east and countless natural parks in the interior.

Camí de Ronda
The longest and most picturesque of all the routes in Catalonia is the Camí de Ronda or Camino de Ronda. It runs all the way along the coast from the border with France down to the border with the Valencia region. Passing through quaint coastal villages, along clifftops and even through tunnels, the route was originally created by smugglers who used to take their loot from one bay to the next. Later, these routes were joined together to form one long one by the civil guard, in order to control and catch the criminals.

The trail runs for a whopping 583km throughout the whole region, but the most spectacular and well-known sections of the hike lie within the Costa Brava, which starts from Blanes and runs all the way up to Portbou on the French border. This part is around 220km long and can be done in 12 stages, taking a total of 12 days. It’s not necessary to do the whole route, however, you could easily take a single stage and make a day trip out of it. It’s best done in early summer before the crowds arrive or in September when it’s still warm enough to swim along the way, but all the holidaymakers have gone home. 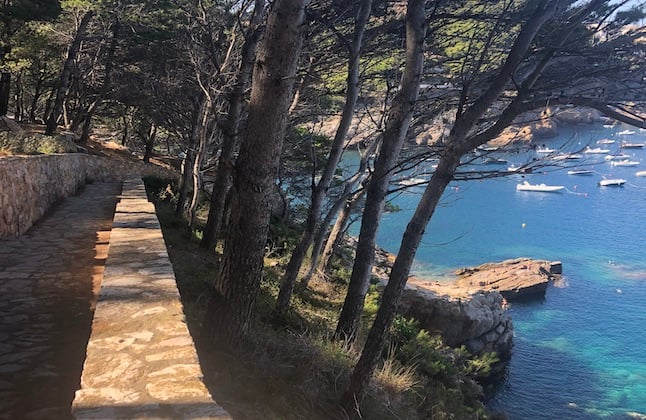 The Camino de Ronda takes you right along the coast. Photo: Esme Fox

Mont-Rebei Gorge
The Congost de Mont-Rebei gorge is one of the most striking in the whole of Catalonia, where incredible aquamarine waters run between dramatic ravines and lofty cliff tops and vultures soar overhead. It’s a popular route and is moderately challenging with several ascents and dips walking along narrow pathways or staircases clinging to the edge of the rock. It’s situated approximately a three-hour drive west of Barcelona on the border with Aragón. You can choose to hike longer or shorter sections of the route, but the main and most popular part is around 12km there and back. 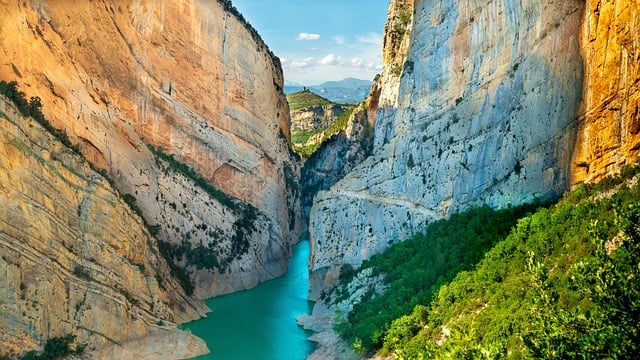 Hike along the sides of a gorge at Mont Rebei. Photo: Ramon Perucho / Pixabay

Ruta dels 7 Gorgs
Near the small village of Campdevánol​​​ in the province of Girona, close to the foothills of the Pyrenees, you’ll find one of the most thrilling hikes on our list – the route of the seven waterfalls. It’s exactly like it sounds, a hiking route between seven different waterfalls. It’s best to go in summer as you can swim in each of the falls, letting the icy water from the Pyrenees cool you down on those hot Spanish days. It’s a circular route of just 10km, with an extra 6km if you’re walking from Campdevánol​​​ train station, but it could end up taking all day if you plan on swimming in each. The route is relatively easy, but there are some tricky steep parts getting down and up again from some of the waterfalls. Because it’s so popular, the number of people allowed in per day is limited and you must pay an eco-tax fee of €5 per person from June to November. 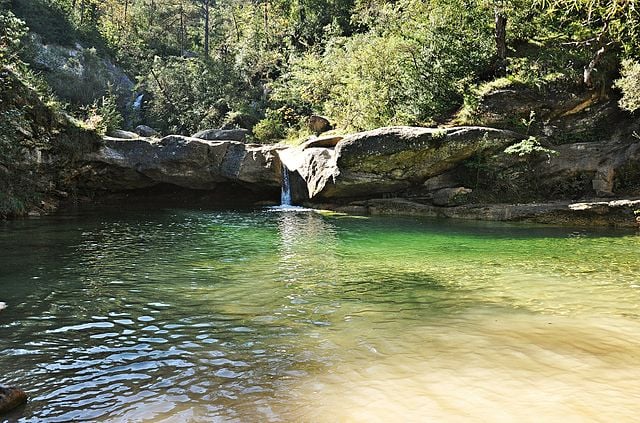 Take a dip in the Campdevánol waterfalls to cool down. Photo: Alberto-g-rovi / WikiCommons

Camí del Vi
Catalonia’s wine route lies within the Penedès, an area known for producing excellent wines and cavas and home to some of the best wineries in the region. It starts in the town of Vilafranca del Penedès, the capital of the wine region and runs for 3.5km, taking around three hours to complete in total, there and back. From the tourist office, you’ll walk through the town and then out into the vineyards themselves. Along the way are eight different stations where you will learn about wine production and the life cycle of the vine, as well as the different varieties of grapes that grow in the area. There are plenty of bodegas (wineries) near by where you can stop for a drink too. 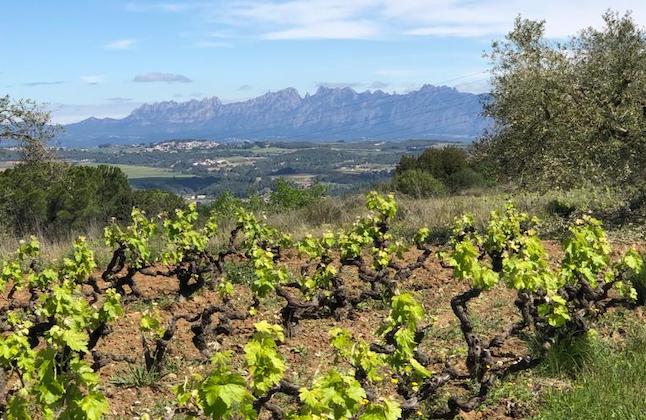 Ruta de los 7 Lagos del Circ de Colomers
Between the National Park of Aigüestortes and the Vall d’Aran, just went of Andorra in the high Pyrenees lies the route of the seven lakes. It’s a total of 15km, but there are taxis that can take you from the car park to the beginning of the route and back, taking it down to just 7km. One of the most spectacularly beautiful hiking routes, as the name suggests, it passes seven glassy mountain lakes hemmed in by towering peaks and verdant forests. It’s of medium difficulty level, meaning it’s best if you have a bit of experience with hiking in the mountains. 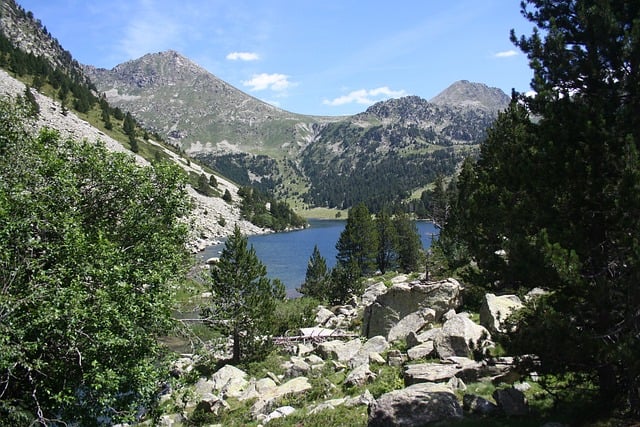 Ruta por los volcanes de la Garrotxa
Just north of Girona lies La Garrotxa Volcanic Zone Natural Park, which offers one of the best examples of volcanic landscapes on the Iberian Peninsula, featuring 40 ancient volcanic cones and around 20 old lava flows. One of the best ways to explore it is via the various hiking routes throughout the park. The best is the circular hike from La Fageda d’en Jordà to the Santa Margarida volcano and on to El Croscat volcano, which is 12km and takes just over four hours complete.

Hike through the land of ancient volcanoes in La Garrotxa. Photo: Carquinyol / WikiCommons

Subida al Pedraforca
The most challenging hike on our list is the ascent of Mount Pedraforca, located in the high Pyrenees, just below Andorra. It’s one of Catalonia’s most iconic-looking mountains – resembling a pitchfork with a small dip in between two soaring pointed peaks, one measuring 2444m and the other 2506m. The starting points generally begin at the Mirador de Gersolet viewpoint, but there are several routes to reach the top. It takes between five and seven hours to complete, depending on your experience but is best avoided in winter and early spring from December to April when the snow can make it even more difficult. 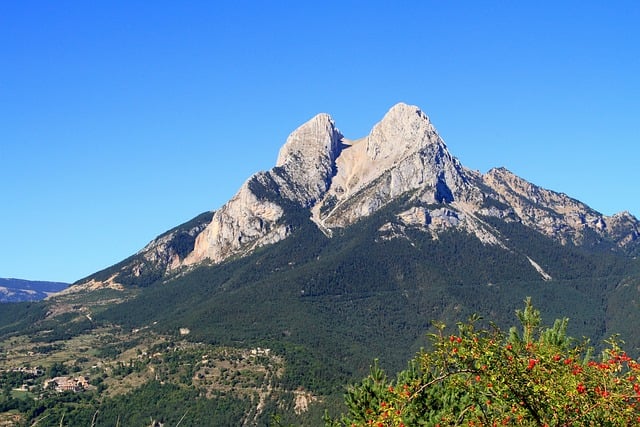 Challenge yourself with the ascent of Pedraforca. Photo: Josep Monter Martinez / Pixabay

Ruta de Carros de Foc
Another hike within the mighty National Park of Aigüestortes is the grand Carros de Foc or Chariots of Fire. It’s a circular route of 65km and takes between five to seven days to complete between nine different mountain refuges, where you can stay the night. The route is characterised by high mountains and large granite boulders, as well as several sparkling mountain lakes. You’ll need some experience and stamina to complete this one. 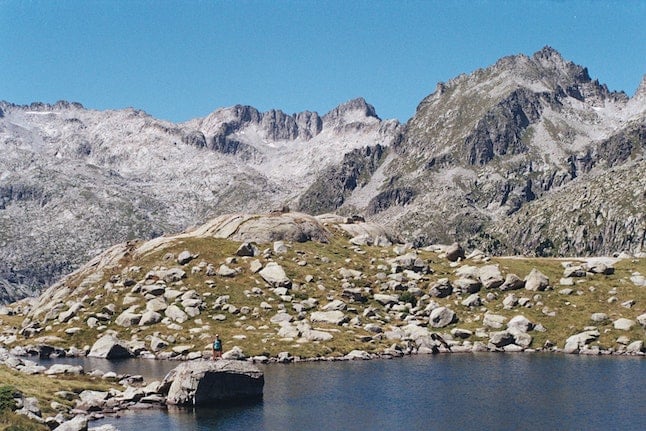 Most of us have had bad airport experiences, whether we’ve missed a connecting flight, our luggage has gone missing or we’ve been held up in security so long that we hear our names being called out for final boarding.

But, would your bad experiences lead you to dub that particular airport the worst in the world?

This is what happened to Financial Times’ HTSI editor Jo Ellison who criticised the distances between the terminals and the fact that all of the walkways seemed to steer passengers through duty-free shops on the way to their gates.

However, she wrote in her article that what ultimately led her to call it the worst airport in the world was the complete lack of signage, “in any language, not even in Spanish”. This in turn led to a lot of confusion about where she had to go, causing her in the end to miss her connecting flight.

She wrote: “Sprinting for 40 minutes on disembarkation, through arrivals, along travellators, via a giant car park, to a bus, on a highway to another terminal and a new set of departures, on a further connecting train, through the duty-free shop and down an interminable corridor to discover that I had, sadly, and by two minutes, missed my next connection, I came to this conclusion. Madrid-Barajas is the Worst Airport in the World”.

But does the Spanish capital’s airport really deserve such criticism and is it really fair to be given the title of the worst in the world?

In December, we published a piece saying that Madrid’s airport was in fact ranked best in Spain and Europe in 2022, a complete contrast to the FT’s piece.

This was based on two different airport awards – the Skytrax World Airport Awards 2022 and the airport ranking by claims management company AirHelp, both of which looked at the overall quality of international airports, from the staff to the ease of getting around to the facilities.

The annual AirHelp 2022 ranking revealed that Adolfo Suárez Madrid-Barajas was the best in Europe and the 12th best in the world, receiving a total of 8.25 points out of 10.

It particularly scored highly for punctuality, and customer satisfaction, as well as leisure spaces, shops and restaurants. Even though airport signage and distance between terminals were not specifically ranked, most customers were satisfied with their experiences at the airport with a customer satisfaction score of 8.19 out of 10.

This is far behind the airport that came in last place at number 151 – Toronto Pearson International Airport with an overall score of 6.11.

In the other awards – Skytrax Top 100 Airports for 2022, voted for by air travellers in the 2021/2022 World Airport Survey, Adolfo Suárez Madrid Barajas came in at number 16 in the world.

The survey asked users for their opinion on the world’s best airport including factors such as public transport serving the airport, taxi prices from the airport, Covid-19 protocols, signage in the airport, walking distance to arrivals, service of the staff, cleanliness, wi-fi availability and waiting times for immigration among others.

Again this was well ahead of the worst airport on the list at number 100, which was Palma de Mallorca.

With two major awards under its belt, based on stats and passenger satisfaction, as well as particular issues that caused the journalist grievances such as signage, can the Spanish capital’s airport really be called the worst airport in the world?

Share your own views and experiences of Madrid-Barajas airport in this quick survey.