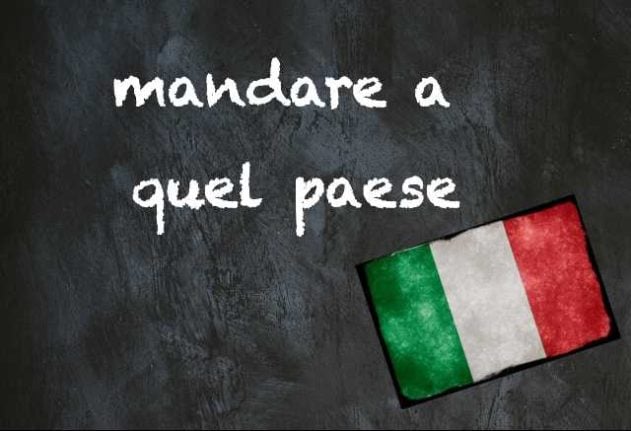 If someone tells you they’ve been mandato a quel paese – literally ‘sent to that land/town’ – don’t imagine they’re packing for a nice holiday.

It means they were told to get lost, go to hell, or worse – in this case the Italian phrase is much less vulgar than its range of possible English counterparts.

Le ho chiesto se qualcosa non andasse e mi ha mandato a quel paese!
I asked her if something was up and she told me to go to hell!

Avrei dovuto mandarlo a quel paese.
I should have told him to get lost.

The euphemistic substitution of ‘that place’ for ‘hell’ is thought to have arisen because it was at one time considered bad luck to name the latter, carrying with it the risk of summoning evil spirits.

These days you can, however, send someone to the devil (mandare al diavolo), which has basically the same meaning as mandare a quel paese.

Avete appena mandato al diavolo l’unica persona che poteva aiutarti.
You just told the one person who could have helped you to go to hell.

If you want to tell someone to get lost in person, you can order them to ‘andare a quel paese’ – to go to hell.

It’s important to remember to conjugate andare so it agrees with whoever you’re telling to get lost – vai for one person, andate for more than one, and you can technically even use the formal vada to ‘politely’ send someone to hell.

– Quel maglione sembra un po’ trasandato.
– Era un regalo di mia nonna. E vai a quel paese!
– That jumper looks a bit past it.
– It was a gift from my gran. And you can go to hell!

Tu e papà non capite nulla di me, andate a quel paese!
You and dad don’t understand anything about me, get lost!

As a footnote, there’s a small Italian town in the province of Matera in Basilicata that for many years was referred to as simply quel paese, based on a superstition that the village was cursed.

The legend goes that at a local councillors meeting in Matera the 1940s, the mayor of the town of Colobraro called for the chandelier in the room to fall in his head if he had told any lies. A couple of days later the chandelier did fall, causing several injuries and possibly death.

From that point on, Colobraro was feared by its neighbours, who refused to say its name, referring to it only as quel paese.

When the Italian anthropologist Ernesto de Martino paid a couple of visits to the village in the 1950s, he was warned off entering it by inhabitants of nearby towns. He later suffered severe engine damage to his car and recorded that the local who had been due to welcome his team died in a road accident shortly before the meeting.

These days, Colobraro makes the most of its spooky reputation, putting on a series of events in August and September named Sogno di una notte a QUEL Paese (‘Dream of a night in THAT town’) in which visitors are invited to attend various theatrical and musical performances and sample the local produce.

Maybe on reflection it’s not always such a bad thing to be mandato a quel paese.