Rats are a major problem in Marseille – estimates put the Mediterranean city’s rat population at somewhere between 1.2 million and 1.6 million, or about one-and-a-half to two times its human population.

(Although that’s nothing compared to Paris, which is believed to have around 6 million rats – roughly double the human population.)

According to regional newspaper La Provence, Marseille authorities are consulting a ferret breeder from the Gers as a complimentary and chemical-free friendly trial alongside more routinely used pest control options.

“We carry out many outdoor rat control operations, but it is complex because the use of boxes installed in parks and gardens, for example, is very much regulated by European directives,” one official told the paper.

Ferrets are used to flush out rats in a controlled area, and drive them into nets, where they are captured, and euthanized. The operation is repeated 48 hours later.

The breeder working with Marseille authorities believes that his ferrets, working in groups of two or three at a time, can help trap “at least 100 rats per week”.

In Marseille, about fifteen “particularly infested” sites have already been listed for the trial, which is due to begin in November, “especially near schools”, according to La Provence.

The cliffs of Etretat, in Normandy, and the Calanques, around Marseille, La Ciotat, and Cassis on the Mediterranean coast, have made Fodor’s Travel new list of places to avoid because of tourist overcrowding and threats to the environment

And it’s not just writers at Fodor’s who are concerned.

Each year, around one million visitors flock to Etretat for the sea and the cliffs. Shaï Malet, co-president of the Etretat association told Franceinfo that the scale of tourism in the area was “extremely harmful”.

She said that the sheer number of people walking along the cliff area was leading to an increase in the number of landslides and cliff collapses, as the coastline eroded by about 20cm annually, and called for a maximum quota of 5,000 vehicles per day visiting the popular resort area.

Since last year visitor numbers have been strictly controlled in parts of the Calanques national park, along the Mediterranean coast at certain times of the year.

But with the rock formations crumbling under the weight of tourists authorities were forced to act. A maximum 400 tourists can visit the Calanque de Sugiton daily. 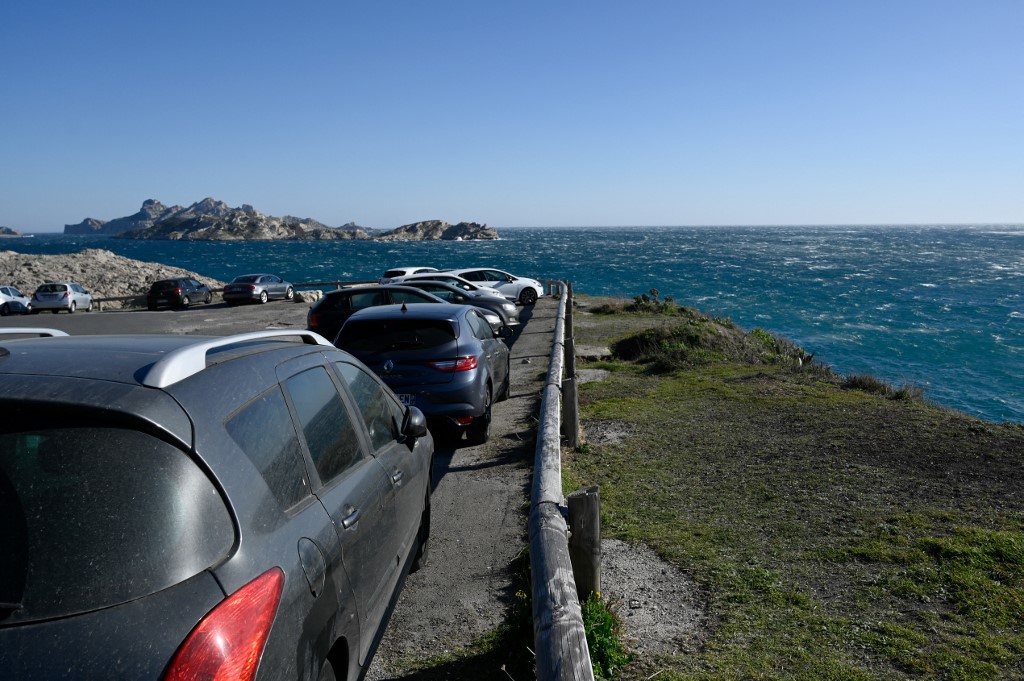 Vehicles in a car park area of the Calanques national park. (Photo by NICOLAS TUCAT / AFP)

The limit has been in place since summer 2022, and already the effects are noticeable.

“We have noticed little things –  we found that the soil showed it had been damaged less,” Gaëlle Berthaud, director of the Calanques national park said.  “If we didn’t act, this calanque would lose all its environmental value despite its landscape quality.”

The île de Porquerolles, in the Var, has also set limits on the number of tourists by requiring tvisitors to pre-book tickets with boat companies that carry them over the short stretch of Mediterranean that separates the island from the mainland.

Other well-known tourist spots are taken steps to preserve what makes them special for future generations of tourists – some by seeking to reduce daily numbers, others by trying to spread out the number of visitors over a longer period, by advertising “out of season” visits

Tourism bosses at Mont-Saint-Michel, where the number of vehicles visiting in 2022 was at 97 percent of pre-Covid levels, are looking into “more sustainable tourism”, Ouest France reported. “The experience can be very unpleasant on certain days of the summer season,” one official told the newspaper. 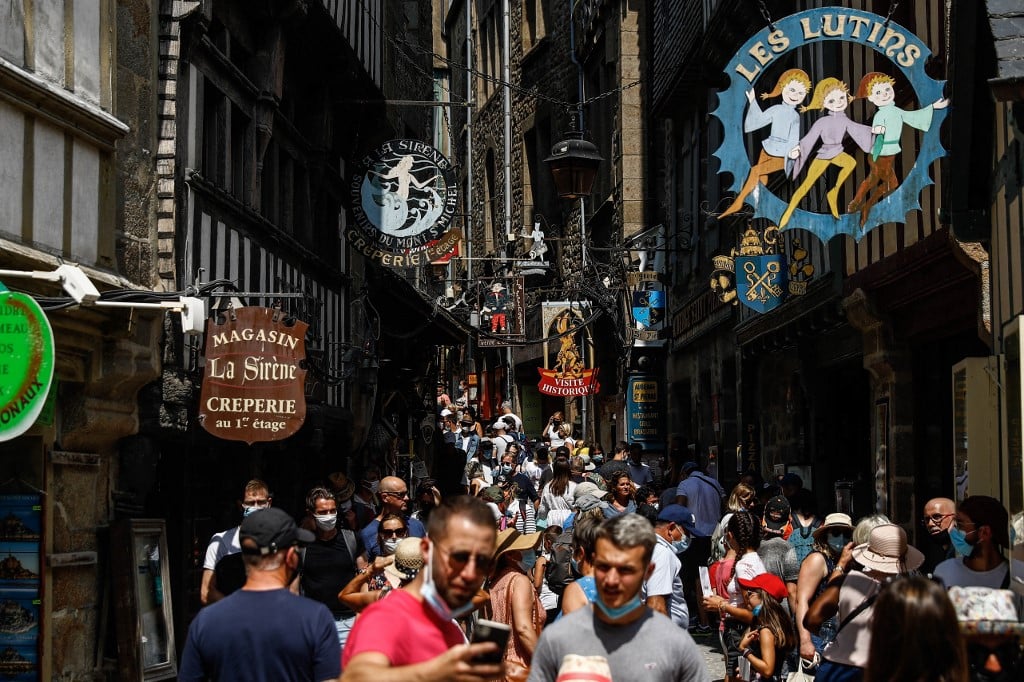 Tourists and visitors, in a busy street in the centre of Mont-Saint-Michel. (Photo by Sameer Al-DOUMY / AFP)

A similar discussion is taking place over future tourism at the popular Gorges du Verdon – where access was restricted in some areas because of the drought in 2022.

After a promising June, when tourist numbers were up 8 percent year-on-year, according to official figures, the extended heatwave and drought last year contributed to a 30 percent fall in visitors in June and 49 percent drop in August.

“We must adapt tourism to climate change,” Fabien Perrot, director of the local tourist office, told Var Matin, as officials looked for ways to extend the tourism period beyond the summer to ease pressure on local areas. 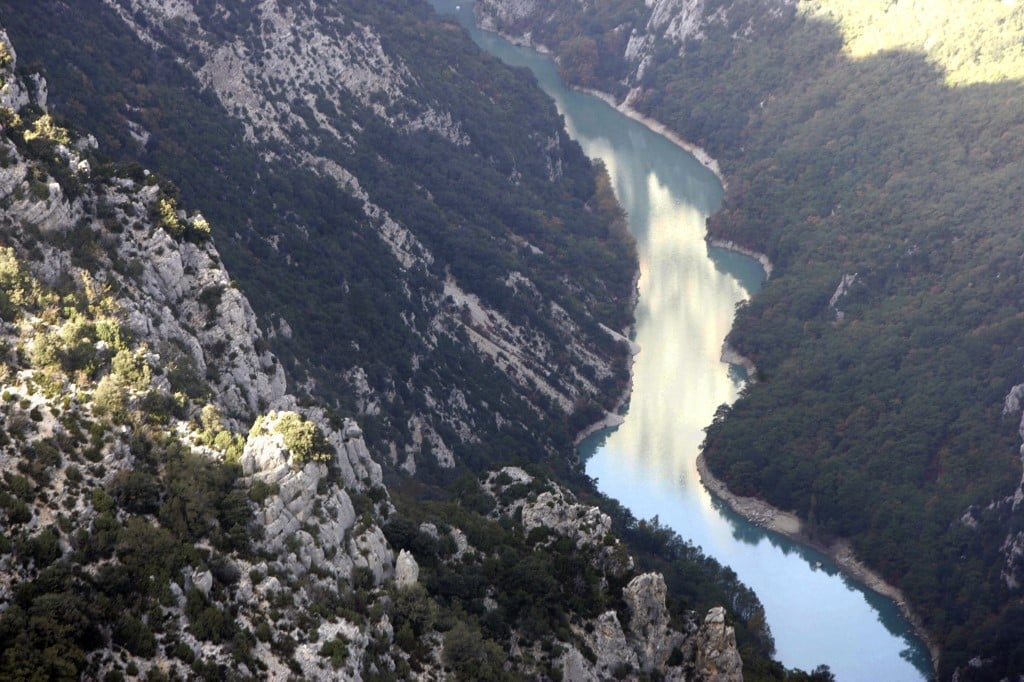 Officials in the Gironde have long been looking at ways to protect the Dune du Pilat from the worst of its popularity with tourists. The 100m tall natural structure is a magnet for about 2million visitors a year.

As long ago as 1940 the State decided to protect part of the site against the urbanisation of the coast. The perimeter of protection was extended in 1994, to include nearly 7,000 hectares of the surrounding forest. Today, following the passing of a law in 2019, local officials can temporarily limit visitor numbers. 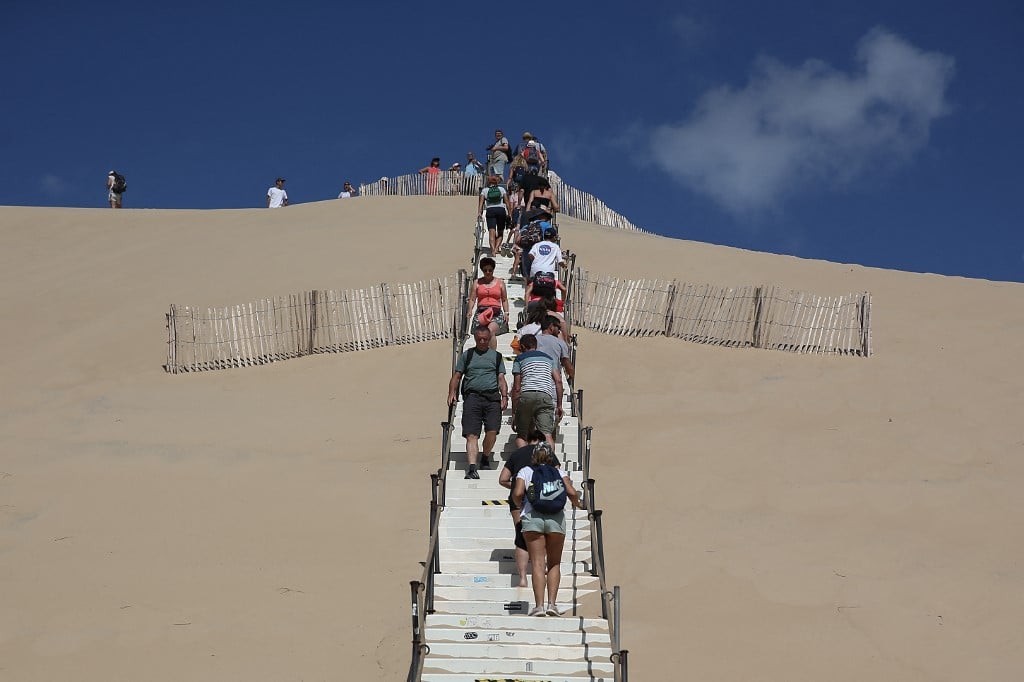 And the government has launched a project to extend the nature reserve surrounding the Glénan archipelago, off the coast of Fouesnant in Finistère. The seven islands and islets have been protected for years – but now the government is seeking to extend protections to preserve their natural, terrestrial and maritime riches.

Mayor of Fouesnant, Roger Le Goff said: “It is not a question of making this area a sanctuary, but rather of allowing a better reconciliation between human activities and the protection of biodiversity.” 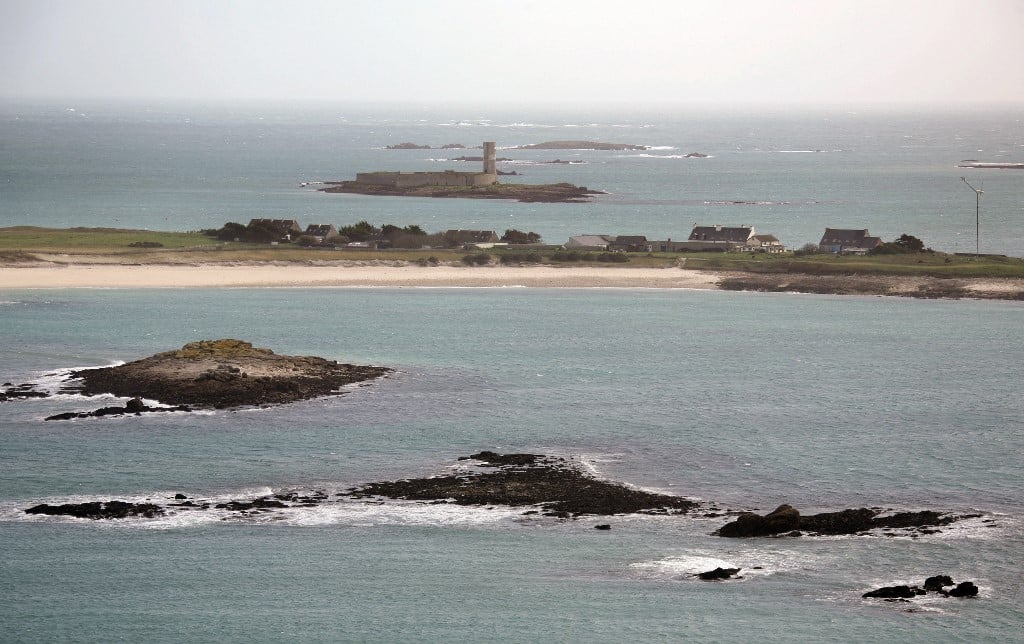 The natural wonder of the Baie de Somme is its both a pro and a con for local officials, who recognise that its popularity with visitors is degrading the area and making it less attractive for future visitors. They have turned to technology, using the app Waze to inform visitors about alternative parking sites, or alternative areas to visit. 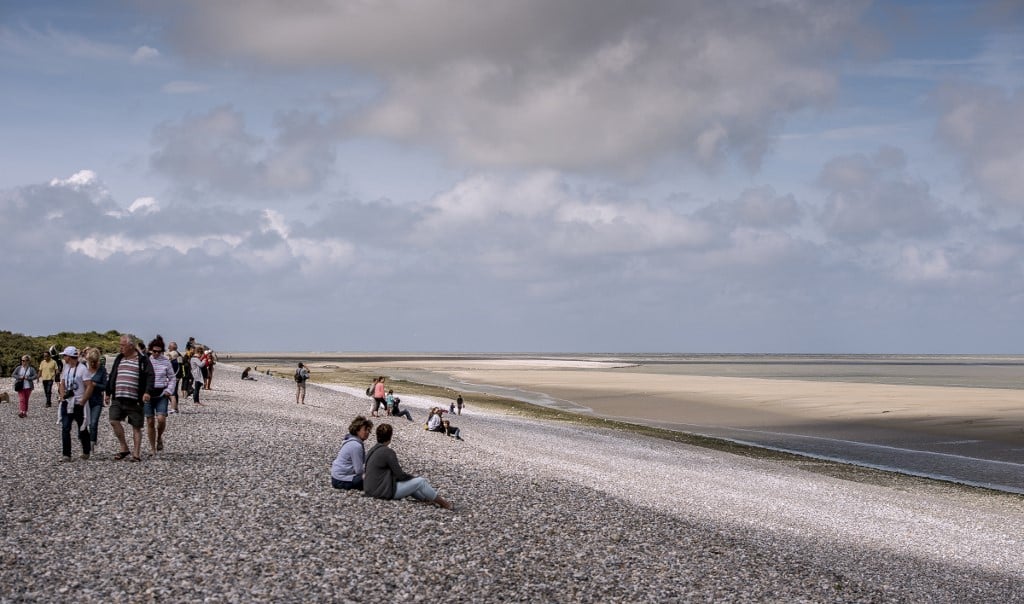 People on a beach at the Baie de Somme. (Photo by PHILIPPE HUGUEN / AFP)

Much can be done relatively simply. In order to remedy erosion caused by tourist overcrowding, officials at the Puy de Dôme reorganised the management of visitor flows by developing pedestrian paths, and establishing of integrated signage as well as landscaped parking lots at the foot of the site. 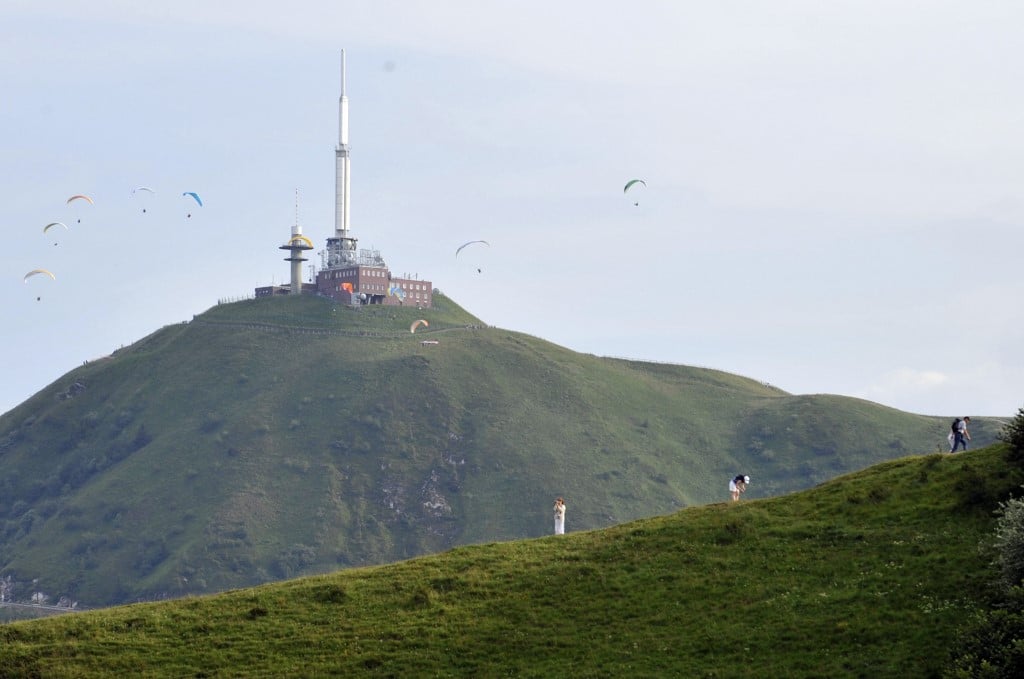 In 2012, an electric train replaced the 50,000 cars and 7,000 coaches that used to climb the extinct volcano’s slopes each year. This  mode of transport saves 5,200 tons of CO2 and better regulates access to the summit while allowing attendance throughout the year.

The Puy, listed as a Grand Site de France, is also on the Escapade nature sans car project, which promotes the discovery of these exceptional landscapes without a car.