European leaders gave Draghi, a hero in Brussels during his former decade-long leadership of the European Central Bank (ECB), a warm round of applause on the last day of his final EU summit.

The 75-year-old economist was due to be replaced later on Friday as Italian prime minister by far-right eurosceptic Giorgia Meloni, leader of the post-fascist party Brothers of Italy.

As leader of the ECB in 2012, Draghi was hailed as the saviour of the euro when he faced down markets during the sovereign debt crisis, famously declaring he would do “whatever it takes” to stabilise the currency.

In Brussels, EU chief Charles Michel led tributes to Draghi at the summit table, thanking him for his work and “artful phrases, and a concise, brief and powerful style”.

The leaders were played a brief tribute video and, according to a European official in the room, Draghi received a long and warm round of applause before delivering his remarks.

“Part of the video statement says that the European Union is the guiding concept for all our countries,” he said.

“They all look at the EU as a source of security, stability and peace. We have to keep this in mind as a guiding star for the future, especially in troubled times like these.” 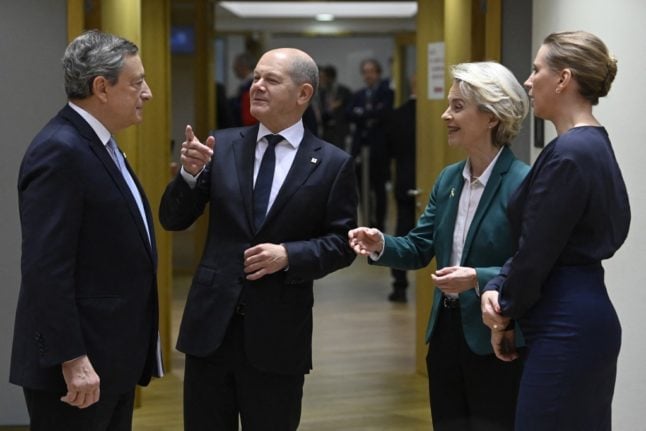 The message could have been directed to his Italian nationalist successor in Rome, but also to some of Draghi’s fellow European leaders at the meeting in Brussels.

Draghi came to the summit angry over resistance to a European price cap on gas imports, accusing richer countries like Germany of out-spending smaller partners to shield their own citizens from the energy shock.

A spokesman said Draghi warned of the negative impact on European unity if countries with more fiscal firepower go it alone, and urged the creation of a “common spending capacity” to cushion consumers across Europe.

This was fiercely opposed by the EU’s so-called frugal countries – led by the Netherlands and Germany – which insist that the bloc already has enough money on hand to help governments face the crisis.

After hours of discussion, the carefully-worded summit statement reflected a difficult compromise, stressing “the importance of close coordination and of common European level solutions, where appropriate”.