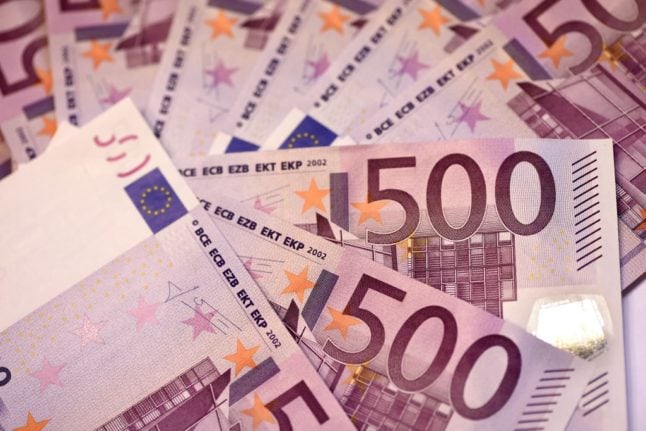 Some of the bills did not have “the holographic patch” that makes it possible to verify their authenticity. Photo: MIGUEL MEDINA /AFP

The gang, based in Spain’s eastern coast, made “high quality” counterfeit €500 bills, they said, adding that 12 people had been arrested.

“This money was allegedly destined to commit different criminal activities, such as the purchase of drugs,” a statement said.

The operation, carried out jointly with Catalan police and Europol, had “dismantled the most important and active laboratory in Europe dedicated to the production of fake €500 bills,” it added.

Among those arrested was the man who allegedly printed the fake bills as well as the main distributors of the counterfeit cash.

Police launched an investigation in 2021 after fake €500 banknotes were found in circulation which were similar to those made by a ring that was dismantled a decade ago in the eastern region of Valencia.

The probe gathered pace after a neighbour of one of the suspected members of the ring found a bag with €4.3 million in fake bills in front of his home near Barcelona, said the head of the counterfeit money unit of Catalonia’s police force, Sergi Sánchez.

Some of the bills did not have “the holographic patch” that makes it possible to verify their authenticity, he told a Madrid news conference where counterfeit bills and seized machinery were displayed.

The purchase of a bicycle with fake €500 notes allowed Catan police to find the suspects.

Jorge Ruiz, a lawyer at the Bank of Spain, said the counterfeit banknotes were of “very high quality” and virtually undetectable to the naked eye.

Three of the arrested met in prison in Valencia, where they planned and perfected their trade.

The 40-year-old was deported to Morocco on Saturday morning after he was held for several weeks at a deportation centre in Barcelona, a police source told AFP.

Officers arrested Mohamed Said Badaoui last month in the northeastern province of Tarragona, where he was the president of the Association for the Defence of the Rights of the Muslim Community.

A Spanish court in late October approved his deportation due to “his participation in activities contrary to national security” and “public order”.

Spanish police consider Badaoui to be “one of the main advocates in Spain of the most orthodox Salafism, which he preaches so influentially that an increase in radicalism occurred in Tarragona” since he moved there, according to its ruling.

Badaoui arrived in Spain at the age of ten from Morocco and has lived in the Catalan city of Reus for 30 years, where he has a wife and three children.

Police also accused him of “taking advantage” of the “vulnerability” of minors who arrive in Spain without their parents, “mainly of Moroccan origin”, to indoctrinate them in the “most radical Salafism,” which promotes a strictly conservative lifestyle.

Badaoui has rejected these accusations. Well-known in Spain’s northeastern region of Catalonia where he has lived for nearly three decades, he presents himself as an activist and anti-racism campaigner.

He has been supported by Catalonia’s main separatist parties which govern the region as well as by the regional branch of far-left party Podemos, the junior partner in Socialist Prime Minister Pedro Sánchez’s coalition government.