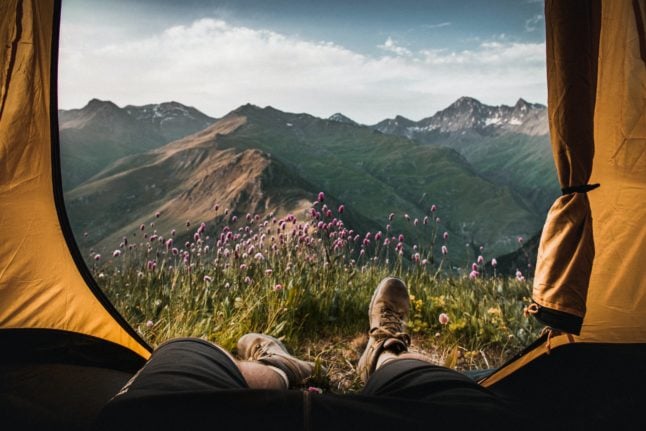 Camping is a popular pastime in Spain and there are many great dedicated campsites dotted all over the country.

But with so many natural and national parks, mountain ranges, forests and rivers, many people want to make the most of them and wild camp overnight.

So, is wild camping permitted in Spain?

Unfortunately, the short answer is that wild camping in any area in Spain is generally forbidden.

The reasons for restricting camping in natural areas ranging from health and safety to security and respecting the environment.

The general rule is that you must find an appropriate campsite to stay the night.

READ ALSO: Can you camp or sleep over at any beaches in Spain?

What about camping in a campervan or caravan instead of a tent?

Wild camping, even in a campervan, is not allowed, however, you are allowed to sleep in your own vehicle overnight, according to article 93 of the General Road Traffic Regulations and Manual 08/V-74. This means that you can actually park your campervan somewhere and sleep in it, as long as you don’t appear to be camping.

Practically it means that you can’t set up awnings, chairs and tables or barbecues outside your caravan and must look as though you are simply parked.

Be aware that parking by the coast is forbidden. General Traffic Regulations state that they “prohibit parking and circulation, as well as camping and camping sites, 20 meters from the beach in an urban area or 100 meters in a rural area, counted from the seashore”.

READ ALSO: What you need to know about Spain’s campervan and motorhome rules

Are there any exceptions? What if I camp without a tent?

Vivac in Spanish or bivvying, as it’s referred to in English, is the practice of sleeping outside in the wild without a tent or a campervan. This is a bit of a grey area when it comes to camping law in Spain and you may be able to get away with it in certain rural areas where you can’t be seen.

Are there any other situations I might get away with wild camping?

Wild camping is strictly prohibited in national and natural parks, on beaches, or by the coast, but there are similar grey areas when it comes to free camping on private land.

Technically you can camp in someone’s garden or field if you get permission from the owner. Remember, they may ask for a small fee for doing so.

Wild camping may be more accepted in some rural areas such as in the Pyrenees, but remember it’s still illegal so you can be fined if you’re caught.

What are the fines for camping illegally?

If you are found to be wild camping, you can be slapped with some hefty fines. According to the Coastal Law, you can be fined from €40 for each metre square of space you occupy if you’re caught camping near the coast.

You can also be fined between €50 and €150 for not parking properly near the coast.

Like most rules in Spain though, each region has its own when it comes to how much you can be fined. Here’s what you might have to pay for wild camping in nature in certain regions.

Valencia: Between €751 and €1500 for camping on the beach during high season.

Catalonia: A minimum of €60.10, but if you’re found camping in natural areas, such as the Delta del Ebro, this can rise to €6000, the highest camping penalty in Spain.

Be aware that the fines could be higher for wild camping in natural or protected areas.

Campfires or bonfires are strictly prohibited in wild and natural areas, particularly due to the risk of forest fires, which caused devastation across many regions of Spain in the summer of 2022. Starting a fire is considered a criminal offence and you may get a lot more than just a fine if it gets out of hand.

Remember to take all rubbish away with you and leave the place exactly as you found it and to bury all human waste away from water sources. 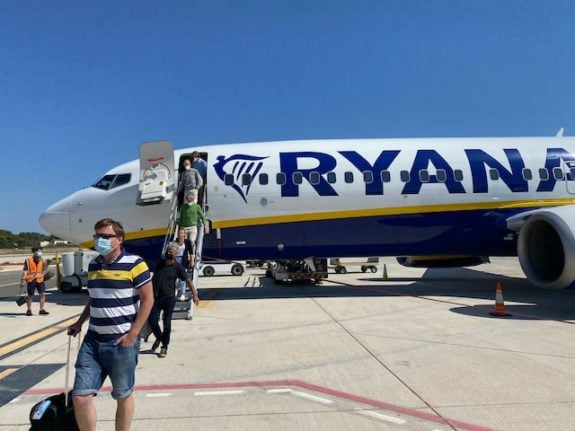 December is a busy travel period with many foreigners leaving Spain to celebrate Christmas with their families back in their home countries and many others travelling to Spain for a holiday or to spend time with their loved ones here.

Airline strikes and an increase in passengers could make travelling this winter a little more challenging, but here’s everything to need to know, so you can be prepared.

According to Spain’s airport operator Aena, the number of airline tickets sold for travel to Spain over the winter season is set to exceed the number in 2019-2020, before the Covid-19 pandemic.

Also, last winter saw the rise of the Omicron variant and some countries introduced new restrictions, so many foreign residents decided not to go back to see their families over the holidays. This means that this year could see more people wanting to return after several years of not having celebrated together with their families.

Therefore, airports could be particularly busy this December, so make sure you leave plenty of time for getting through security and passport control.

There is still one important Covid travel rule in Spain

Although the majority of Spain’s domestic and travel Covid-19 restrictions were lifted before the summer of 2022, one of the only rules that still remains in place is the obligation of wearing a face mask on public transport.

This includes aeroplanes, buses, trains, taxis and some ferries, but mask wearing isn’t compulsory at airports, ports or bus and train stations.

As things stand, the general rule is that cabin crew from all airlines have to tell passengers on planes bound to Spain that they have to wear masks.

If on the other hand the aircraft is flying out of Spain, the mask rules of the country which the plane is flying to apply, which in almost all cases means face coverings aren’t required.

Spain’s flagship airline Iberia has criticised the Spanish government’s ongoing mask requirement for passengers on planes bound to the country, stressing that it “doesn’t make any sense” and “it affects tourism”.

Although it is no longer compulsory to present a negative Covid-19 test to fly, Spanish health and airport authorities ask that anyone with Covid-19 symptoms avoid travel.

It is no longer necessary either for travellers to fill in health control forms before flying to Spain as was previously the case, and there are no bans or restrictions on non-EU or other specific countries.

Which are the least busy days for travelling to Spain in December?

According to flight search engine Skyscanner, which has analysed nine million searches for people looking to travel to Spain over the festive period, some of the quietest days to travel to Spain are from the 18th to the 23rd, with the 23rd being the least popular before Christmas.

If you’re wanting to fly to Spain after Christmas, however, you’ll find it even quieter on December 28th, as well as January 1st, 3rd, 4th, 6th and 7th. You may find Spanish cities to be fairly busy however as December 6th and 8th are public holidays.

Conversely, the most popular days to travel are between December 12th and the 17th, so avoid those days if you want to avoid the crowds.

Who is travelling to Spain this December?

According to new data released by Spain’s Tourism Ministry, during the last month of the year, 7,066,101 people have booked seats, which implies a recovery of 97.4 percent compared to the same month of 2019.

Forecasts for the early December holidays reveal that Italians, Germans and French are the main tourists who will be visiting Spain. During the puentes and public holidays on December 6th and 8th, Italians will make up the majority of tourists travelling to Spain (23 percent), followed by Germans (17 percent), French (16 percent), British (10 percent) and finally the Portuguese (6 percent).

The Vueling strikes are due to take place on Fridays, Saturdays, Sundays, Mondays and public holidays. They began on November 1st 2022 and will run right through the Christmas period to January 31st 2023.

Specifically, this means that those travelling on December 2nd, 3rd, 4th, 6th, 8th, 9th,10th and 11th may be affected by cancellations.

Additional days that will be affected include December 24th, 31st and January 5th 2023, affecting those passengers who plan on travelling for Christmas Day, New Year’s Eve and Three Kings’ Day.

The workers are demanding a wage increase in line with the rise in prices due to inflation, as well as protesting over the precarious work conditions that have been experienced within the sector since even before the pandemic.

Many passengers are currently being offered alternative flights, refunds or other compensation if their flights are cancelled.

Ryanair baggage handlers and on-the-ground staff have also been striking and will continue to do so until January 7th, 2023.

It’s likely these airports will include Alicante, Barcelona, Madrid, Málaga, Palma de Mallorca and Seville, however, it’s worth noting that Ryanair has said that it doesn’t expect this strike to cause that much disruption.

One of the advantages of going back to your home country for Christmas is not only to see your friends and family but also to stock up on treats and ingredients you’ve missed while living in Spain. Think mince pies, custard powder and Marmite for those going back to the UK.

But as this is the second Christmas since Brexit came into force, many may still not be totally aware of what they’re now allowed to bring to Spain from non-EU countries.

The EU’s strict rules mean that all imports of animal-derived products are not allowed. This means no Christmas puddings with suet, no British bacon and blocks and Wensleydale or Cheddar cheese to bring back with you.

If you want to know exactly what you can and can’t bring in this Christmas, read our detailed guide here.

Bringing food from Spain into the UK, is a little easier as you’re still allowed to bring in EU products, so packets of jamón and Manchego cheese are ok to take.

Those who are planning on travelling within Spain this Christmas, either to visit friends and family or simply for the fun of travel should know that there are currently lots of travel discounts, particularly on trains.

Multi-journey tickets are currently free on Cercanías, Rodalies and Media Distancia trains and are worth paying the €10 or €20 deposit for if you’re going to be making the same journey several times during your trip.

For example, if you’re planning on spending the holiday in the small Catalan town of Sitges, but know that you’ll be making several trips to Barcelona during that time for sightseeing, shopping or eating out, then it could be worth it.

Unfortunately, the free tickets are not available on long-distance trains, but you can still get a bargain on these this winter as Spain’s new low-cost train operator Iryo recently launched.

This means that you can get tickets from Madrid to Barcelona as well as Valencia and Málaga for an average of €18 each.