A photo taken on October 1st 2017 shows people sat in Plaza Catalunya square in Barcelona as they wait for the results of a referendum on independence for Catalonia, a vote that was banned by the Spanish government. ON October 1st 2022, Catalonia marks the fifth anniversary of self-determination referendum organised by separatists despite being banned by the courts. (Photo by JOSE JORDAN / AFP)

Josep Lluis Rodríguez has not given up hope of an independent Catalonia. But five years after a banned referendum, he no longer expects anything from the deeply divided separatist leaders in Barcelona.

“Of course there is frustration and anger, because they didn’t do what they should have done,” the 62-year-old former company boss told AFP of the leaders who failed to make good on their separatist promises.

“It’s clear they are no longer openly interested in independence,” he said, standing outside the church in Arenys de Munt just north of Barcelona.

Many Catalan independence flags can be seen fluttering from balconies along the main street in Arenys de Munt, a town of of 9,000 residents which was the first place to hold a symbolic referendum on independence in 2009.

Hundreds of municipalities followed suit, driving a groundswell of pro-independence activism which would reach its climax in the events of October 2017 under the regional government of Carles Puigdemont.

Despite being banned by the Spanish courts, the 2017 referendum organised by the separatist government went ahead but descended into chaos as police moved in to stop it, sparking confrontations marred by violence.

“October 1st was when civil society really came out en masse,” catching the separatist parties by surprise who had not expected such a huge mobilisation in response to their moves towards independence, Rodríguez said.

“It was only later that we realised that they didn’t have a concrete plan, nor structures in place (for achieving independence),” said Rodriguez, an activist with the ANC, the region’s biggest grassroots separatist movement.

Despite the police crackdown, the fact the referendum took place at all was “a great victory for the Catalans”, he said.

And to mark the anniversary this Saturday, he will attend a demonstration in Barcelona bent on securing a new referendum.

“We’re organised and when the time comes, we will mobilise.”

The results of the October 2017 referendum were never independently corroborated, and weeks of confusion followed, culminating in a short-lived symbolic declaration of independence by the Catalan parliament.

That proved to be the straw that broke the camel’s back, with Madrid sacking the Catalan government, suspending the region’s autonomy and putting its leaders on trial as it struggled to handle Spain’s worst political crisis in decades.

Despite passions running high over independence, the region itself remains divided, with only 41 percent in favour of separation while 52 percent want to remain in Spain, the latest survey suggested.

But it’s a far cry from the 49 percent who wanted to break away in the October 2017 poll.

Last year, the separatists again won a majority in the regional elections and managed to cobble together a fragile coalition grouping the left-wing ERC and hardline JxC.

But they are sharply at odds over how to achieve independence, with ERC backing a negotiated strategy via dialogue with Madrid, while JxC prefers a confrontational approach given that Spain has ruled out any new referendum.

“The political deadlock is ongoing, the Catalan government is divided and every day they attack each other in the press over a thousand things,” said Joan Botella, a political scientist at Barcelona’s Autonomous University.

“Nobody is suggesting a way forward or how to resolve the conflict.” 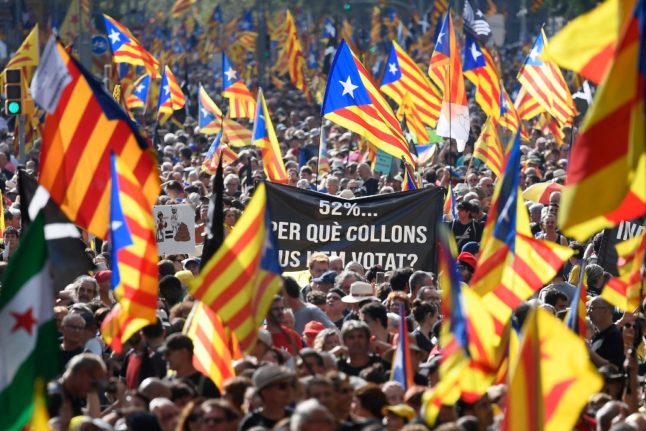 Demonstrators hold a banner reading “52%, why the hell did we vote for you ?” and wave Catalan pro-independence “Estelada” flags during a protest marking the “Diada”, the national day of Catalonia, in Barcelona on September 11th 2022. The protest coincides with Catalonia’s national day, or “Diada”, which commemorates the 1714 fall of Barcelona in the War of the Spanish Succession and the region’s subsequent loss of institutions. (Photo by Josep LAGO / AFP)

‘Won’t happen in my lifetime’

Fed up with the impasse, the ANC called people onto the streets for the annual “Diada” march on September 11th with a rallying cry denouncing the politicians and insisting “only the people and civil society can achieve independence”.

The powerful movement has been openly critical of the Catalan government’s dialogue with Madrid, and this year its leader Pere Aragones did not attend the rally.

Police said 150,000 people turned out for the event, the lowest figure in a decade — without counting the two years of the Covid-19 pandemic.

“People feel cheated and frustrated but it doesn’t mean they will stop backing independence,” said Josep Sánchez, mayor of Arenys de Munt, standing next to a small monument by the town hall marking the 2017 referendum.

But shopkeeper Magda Artigas has lost any hope of seeing the emergence of an independent Catalan republic, despite voting for one in successive referendums in 2009, 2014 and 2017.