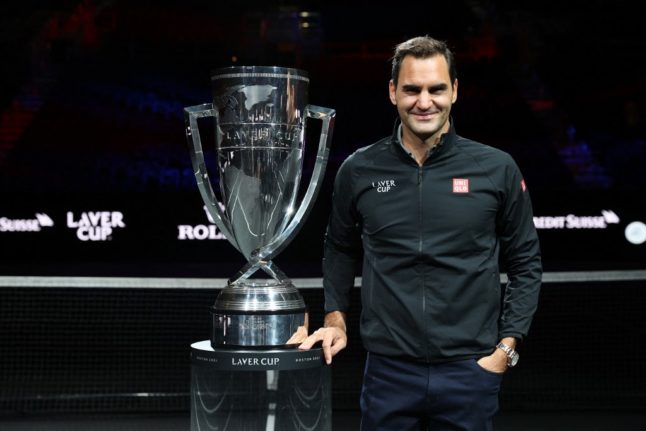 Roger Federer poses for a photograph with the Laver Cup Trophy after taking part in a live TV interview on CNBC at TD Garden on September 24, 2021 in Boston, Massachusetts.(Photo by CLIVE BRUNSKILL / GETTY IMAGES NORTH AMERICA / Getty Images via AFP)

Swiss tennis legend Roger Federer announced on Thursday he would retire from the sport at the end of September.

“As many of you know, the past three years have presented me with challenges in the form of injuries and surgery. I’ve worked hard to return to full competitive form. But I also know my body’s capacities and limits, and its message to me lately has been clear. I am 41 years old,” Federer said on Instagram.

“I have played more than 1,500 matches over 24 years. Tennis has treated me more generously than I ever would have dreamt, and now I must recognize when it is time to end my competitive career”, he wrote.

The 41-year-old winner of 20 Grand Slam titles has been out of action since  a quarter-final loss at Wimbledon in 2021, after which he underwent his third  knee surgery in 18 months.

He added that the Laver Cup next week in London would be his final ATP events. Federer said: “I will play more tennis in the future, of course, but just not in Grand Slams or on the tour.”

Besides thanking his family, including his wife and four children, and fans, Federer thanked Swiss Tennis saying the organisation believed in him as a young player and gave him an “ideal” start.

He wrote: “When my love of tennis started, I was a ball kid in my hometown of Basel”.

“So, I want to thank you all from the bottom of my heart, to everyone around the world who has helped make the dreams of a young Swiss kid come true”.

Federer is one of the sport’s top players, often called GOAT (greatest of all time). He was ranked number 1 by the ATP for 310 weeks, including a record 237 consecutive weeks, and has finished the year as number 1 five times. Federer also won 20 Grand Slam singles titles, and holds the record for most singles titles (eight) at Wimbledon. 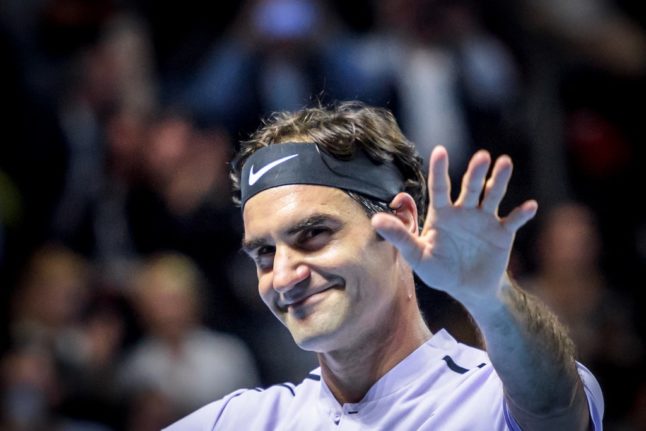 Yes, there was William Tell, but opinions vary about whether he was a real or fictional figure. And even if he was real, it would be difficult for the present generations to get excited about a folk hero who roamed Swiss forests with a crossbow in the 14th century.

But Roger Federer (or simply ‘Roger’ as many in Switzerland call him) is here and now, and to the Swiss people — including those who have never even picked up a tennis racket — he is the real folk hero.

This is clear from the reactions of luminaries and simple fans alike, who took to the social media to share their love, admiration, and respect for the retiring champ.

… for everything you have done for Swiss and international tennis,
… for all the countless emotions we were able to share with you,
… for every child you inspired to play tennis!

Practically no other sporting champion in this or other countries has retired to such accolades. So why has Federer’s announcement spark such outbursts of emotion?

And why is he a Swiss hero?

There are as many reasons as there are fans, but these ones come to mind:

Because of his numerous and impressive accomplishments on the court, Federer symbolises everything that the Swiss admire the most: hard work ethic and strife for excellence.

The more than 100 titles that he won since he started his professional career in 1998 did not come easy — they required not just talent, but also enormous discipline and perseverance, especially in view of several serious knee injuries that Federer suffered throughout the years.

“Tennis can be a very frustrating sport “, he once said.”There is no way around the hard work. Embrace it. You have to put in the hours because there is always something you can improve. You have to put in a lot of sacrifice and effort for sometimes little reward but you have to know that, if you put in the right effort, the reward will come.”

That’s the kind of fighting talk the Swiss love to hear.

Despite his global success and celebrity status that comes with it, by all accounts Federer remained unaffected by his stardom.

And that is another trait that Swiss admire: modesty and humility.

“He remained modest, with his feet firmly on the ground”, added Defence Minister Viola Amherd, a self-proclaimed Federer fan who attended many of his games.

Federer himself once famously said that “It’s nice to be important, but it’s more important to be nice”.

And that, according to all accounts, he was.

Federer is a multi-millionaire, but he channels some of the money he earned into worthwhile causes.

His namesake foundation helps children living in poverty “to take control of their future and actively shape it. There is sufficient evidence that proves that education is a prerequisite for reducing poverty, improving preventive healthcare and creating a committed civil society”.

To that end, “we aim to give children the best start on their educational path through life by establishing and further developing existing early educational services in a sustainable way”.

The Swiss like people who have social consciousness and use some of the fruits of their hard labour for worthy purposes.

Federer willingly stepped up to the plate when tourism to Switzerland petered out during the Covid crisis and was slow to bounce back.

He recruited his American friends, actors Robert de Niro and Anne Hathaway, to appear with him in tongue-in-cheek commercials promoting Switzerland’s charms.

“He is an exceptional ambassador for our country”, Amherd said.

All in all, many of the farewell messages posted on social media had a twinge of sadness to them.

As Wimbledon tweeted, “We will so miss the sight of you gracing our courts, but all we can say for now is thank you for the memories and joy you have given to so many”.

And Bideau put it even more succinctly: “Thanks for everything, champ”