The SNCTA union, which represents the majority of French air traffic controllers, has called a one-day strike for Friday, September 16th.

Flights on this day will be heavily disrupted, and it’s likely that there will be knock-on effects over the weekend as well.

This affects flights in and out of all French airports (which includes France itself and its overseas territories such as the Caribbean islands of Martinique and Guadeloupe) and potentially affects all flights that pass over French airspace.

The strike is over pay, and also the longer-term recruitment of air traffic controllers.

READ ALSO 16 French phrases to use on strike days

A lot. The French aviation authority Direction générale de l’aviation civile (DGAC) has asked airlines to cancel half of all their flights in and out of France on Friday.

There is no target of cancellation for flights that merely pass through French airspace, but the DGAC has warned that these too can be affected, although it is working with air traffic controllers in neighbouring country to re-route some flights.

The DGAC is recommending that passengers postpone their travel plans on Friday, if at all possible.

In total 1,000 flights have been cancelled.

The 50 percent cancellation applies to all airlines, and anyone whose flight has been cancelled should be notified by email and/or SMS. Anyone who has a flight booked is advised to check directly with their airline, and use the airline app or flight tracker if applicable for the latest updates.

Ryanair – Ryanair has cancelled 420 flights, affecting 80,000 passengers. As well as flights to France, these also include passengers travelling between Spain, Italy, the UK, Ireland and Germany, where flights passed over France.

The company is particularly affected by ‘overflights’ – flights passing over France through French airspace – and is calling on the EU to take tougher action to protect airlines from this type of disruption.

Easyjet – the UK-based budget airline has cancelled 50 percent of its flights, and advises customers to check the Easyjet flight tracker on their website for the latest information on their flight.

READ ALSO: Your rights if your flight is delayed or cancelled in France

Vueling – the Spanish budget airline has cancelled 80 flights to and from France – it has a full list of cancelled flights on its website here. 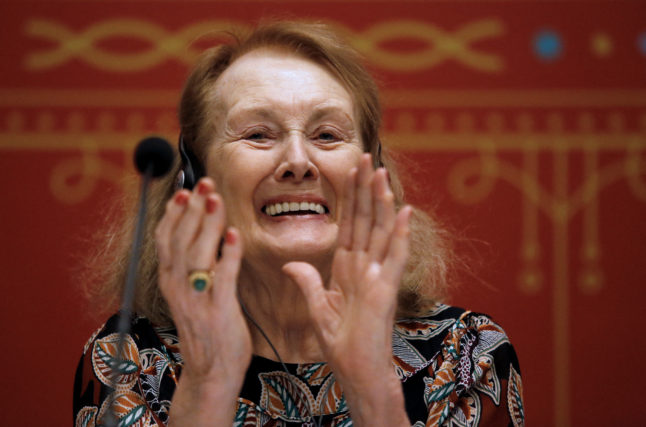 Announcing the award, Mats Malm, Permanent Secretary of the Swedish Academy, said that Ernaux, 82, was being given the prize “for the courage and clinical acuity with which she uncovers the roots, estrangements and collective restraints of personal memory”.
In a press release, the Academy praised the writer for “consistently and from different angles”, examining “a life marked by strong disparities regarding gender, language and class”.
The Academy were unable to contact Ernaux in advance to inform her she had won, which meant she received the news at the same time as the rest of the world.
“I was very surprised,” she told Swedish public broadcaster SVT. “It’s a great honour and a great responsibility.”
“It’s a great responsibility to portray a kind of justice in relation to the world, not only through my writing.”
Ernaux told SVT she had not yet had the chance to tell her children, grandchildren or publisher that she had been awarded the prise, but she thanked Sweden and the Swedish Academy.
“Of course I will come to Stockholm and hold a speech, as I should.”
The Nobel Prize comes with a medal and a prize sum of 10 million Swedish kronor (about $911,400).
Last year, the award went to Tanzanian-born novelist Abdulrazak Gurnah, whose work focuses on the plight of refugees and exile, colonialism and racism.
Ernaux’s name has circulated in Nobel speculation for several years. She was the bookmaker’s favourite to win the prize in 2021, but was eclipsed by Canada’s Anne Carson, Salman Rushdie, Michel Houellebecq, Haruki Murakami, Margaret Atwood, and Stephen King in this year’s odds.
She is the 17th woman to win the prestigious prize, out of 119 literature laureates since the first Nobel was awarded in 1901.
The Swedish Academy has in recent years pledged to make the prize more diverse, after a 2017-18 #MeToo scandal that left it in tatters.
Ernaux will receive the Nobel from King Carl XVI Gustaf at a formal ceremony in Stockholm on December 10, the anniversary of the 1896 death of scientist Alfred Nobel who created the prizes in his last will and testament.

The Swedish Academy was long plagued by suspected leaks, but is known for cloak-and-dagger methods to try to keep its musings and preparatory Nobel work under wraps. Its deliberations are also sealed for 50 years.

It is known to have a longlist that is whittled down throughout the year to a shortlist of five names, before the 18 members vote on a winner.

After Thursday’s announcement, the Nobel season continues on Friday with the highly-anticipated Peace Prize, the only Nobel announced in the Norwegian capital Oslo. Punters have suggested this year’s prize could sound the alarm over the war in Ukraine or the climate. The Economics Prize wraps things up on Monday, October 10th.

PARTNER CONTENT
A ‘Kaleidoscope of Culture’: the Balkan gem waiting to be discovered
Url copied to clipboard!