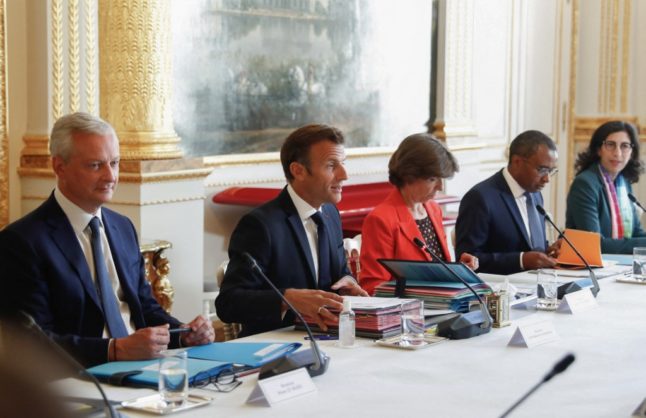 Emmanuel Macron, second from left, addresses his ministers at the first cabinet meeting since the summer break. Photo by MOHAMMED BADRA / POOL / AFP

After a summer marked by drought, massive wildfires and continuing loss of life in Ukraine, the 44-year-old leader delivered a stark speech at the start of the first cabinet meeting after the country’s traditional August holiday break.

“I believe that we are in the process of living through a tipping point or great upheaval.

“Firstly because we are living through… the end of what could seem like the end of abundance.”

Referring to the war in Ukraine, he added: “Our system based on freedom in which we have become used to living, sometimes when we need to defend it, it can entail making sacrifices.”

The speech appeared designed to prepare the country for what promises to be a difficult winter ahead, with energy prices rising sharply and many families struggling with inflation.

It also echoed remarks he made last week during a World War II commemoration event, when he described the tough winter ahead as “the price we pay for freedom”.

The severe drought over the summer, leading to water restrictions across most of the country, has also caused many French people to express fears about the increasingly obvious impact of climate change.

“This overview that I’m giving  — the end of abundance, the end of insouciance, the end of assumptions — it’s ultimately a tipping point that we are going through that can lead our citizens to feel a lot of anxiety,” Macron continued.

“Faced with this, we have duties, the first of which is to speak frankly and very clearly without doom-mongering,” he said.

Macron was re-elected in April to a second term but lost his parliamentary majority in elections in June, meaning Prime Minister Elisabeth Borne heads a minority government that depends on opposition parties to pass legislation.

French inflation was clocked at 6.1 percent last month, one of the lowest rates in Europe thanks to government price caps on electricity and gas, as well as tax cuts on petrol and diesel.

But trade unions are pushing for major wage increases and have called for a day of strikes and rallies on September 29th.

The head of the hard-left CGT union, Philippe Martinez, told BFM television that the president’s speech was “inappropriate”, adding that the poorest were already paying the price of the war and that further sacrifices could not be expected.

“He’ll ask for them (sacrifices) and we will oppose them,” Martinez said.