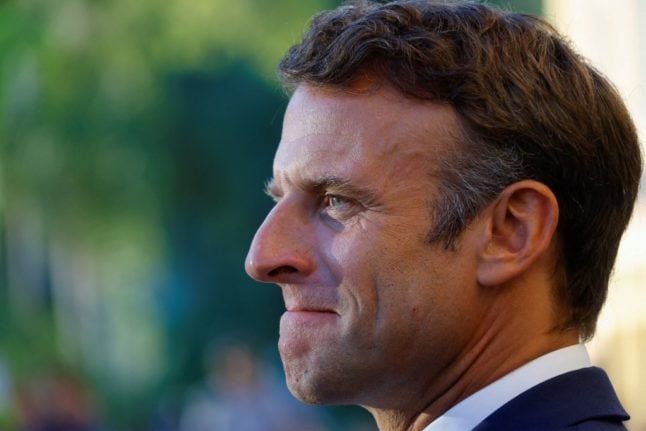 The president has enjoyed a ‘studious break’ on on the Riviera at Fort Brégançon, the official holiday home of French presidents, but this week marks la rentrée (the return to work) and the first meeting of the cabinet.

Here are some of the big issues that Macron and his government must tackle in the weeks to come.

In the June elections Macron’s party LREM lost its absolute majority in parliament and in the weeks that followed attempts to build a coalition failed.

EXPLAINED Who are France’s political parties?

Macron and his PM Elisabeth Borne announced that they will continue with their legislative programme, building alliances on a vote-by-vote basis.

Before parliament ended for the summer session they got some measures passed, including a €65 billion package of financial aid to deal with the cost of living. However these were measures that had broad cross-party support, unlike some of the issues expected to be on the agenda in the autumn.

The lack of a parliamentary majority means that each of Macron’s planned reforms will be, at the very least, subject to long debates and many amendments and could be outright defeated in the Assemblée nationale.

The next scheduled elections in France are not until 2024 (European elections), but if the above-mentioned parliamentary deadlock proves to be insurmountable, the president has the option of calling new elections in order to try and obtain a working majority.

Constitutional experts are split on whether Macron is able to call an election at any time or whether he has to wait a year (until June 2023).

Even those who believe he can call an election at any time say this would be unlikely to happen before the end of this year.

The number one issue for most people in France remains inflation and the cost of living, despite that €65-billion aid package.

Macron used a World War II commemoration event last week to say that increasing costs linked to sanctions on Russia are “the price we pay for freedom”.

He reaffirmed his total commitment to the people of Ukraine – but while a majority in France supports efforts against Russian aggression, the mood may change when people are hit in the pocket.

The hard-left La France Insoumise and the far-right Rassemblement National parties – both of which have a history of supporting Putin – have called for EU sanctions against Russia to be lifted, saying they are ineffective and hurt consumers in Europe.

Many in France predict street protests over the autumn and winter, connected to cost-of-living issues.

Linked to the cost-of-living crisis is the ongoing war in Ukraine and the EU’s response to it.

Macron has been heavily involved in both direct diplomacy – continuing to have phone conversations with Vladimir Putin at the request of Ukraine’s president Volodymr Zelensky – and measures taken at an EU level.

Although there are proposals to increase the EU’s sanctions package against Russia, as the war continues it is possible that it will be more difficult to find agreement from all 27 countries on the way forward.

After a summer marked by scorching heatwaves, fatal storms and the worst drought in 60 years, the climate crisis is at the forefront of people’s minds.

In the reshuffle that followed his re-election in April, Macron expanded the environment portfolio by having two minsters with responsibility for environmental matters, while the climate crisis was also officially added to the portfolio of the Prime Minister.

The three ministers – PM Elisabeth Borne plus Christophe Béchu, Minister for ecological transition, and Agnès Pannier-Runacher, minister for energy transition – now need to come up with a full policy to ‘transition’ France’s society and economy to deal with the climate crisis, while ensuring that the cost burden doesn’t disproportionately fall on those on the lowest incomes.

Macron has reportedly asked Borne to have a strategy ready for publication by early autumn, laying out both short-term and long-term plans.

Ahead of the government’s return, the Transport minister Clément Beaune said that he would like to regulate the use of private jets, while Macron advisers have told the French press that the new political agenda “will be very green”.

Macron’s first term as president saw the longest sustained period of strikes since 1968 over his proposals to reform the pension system. He did eventually manage to get his reforms passed in early 2022, but in the end they were never implemented because of the pandemic.

The initial reform streamlined and simplified the French pension system and did away with many of the ‘special regimes’ that allowed people to retire early, but left the standard pension age at 62.

In a brave move, Macron included in his April re-election campaign a pledge to increase the standard pension age from 62 to 65. He won re-election, but it’s fair to say that his pension proposal has not been greeted with joy.

Even back in 2020 – when Macron’s party had a substantial majority in parliament – he had to resort to a technical measure known as Article 49.3 in order to push the first tranche of pension reforms through. This time, it’s likely to be more difficult.

Also set for a return to the political agenda is the subject of reforms of the unemployment system – some changes were made during Macron’s first term which provoked strikes in industries, including the ski industry.

Interior minister Gérald Darmanin is planning to put before parliament a new Immigration bill that is also likely to be contentious.

It includes a proposal to make language tests compulsory for foreigners in France who want a long-term carte de séjour residency card, as well as a package of other immigration measures that all have the overall effect of making immigration rules stricter.

Although his bill is likely to be popular with the centre-right and far-right, it has already raised eyebrows among the centre-left and leftist groups in parliament, although at this stage very little detail of the proposals have been revealed.

The phrases most often used in the French press to describe the new parliamentary session are une rentrée agitée and une rentrée chargée. We think that roughly translates as ‘expect fireworks’.