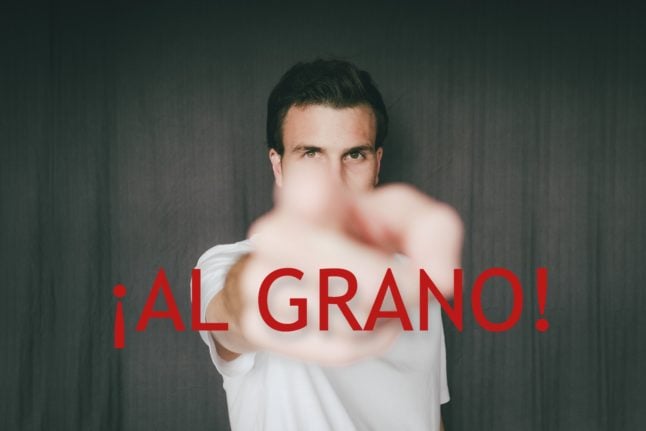 Ir al grano means to get straight to the point, to cut to the chase or to spit it out. Photo: Dan Burton/Unsplash

The word grano has many meanings in Spanish.

It can refer to a grain, bean or seed, such as un grano de arroz (a grain of rice), un grano de café (a coffee bean) or un grano de mostaza (a mustard seed).

It can also be used to speak about a zit or blemish that you get on your skin in the sense of acne, such as tengo un grano en la frente (I’ve got a spot on my forehead).

There’s even the expression aportar tu granito de arena, which in the literal sense means to give your small grain of sand, but actually means to do your bit or to give your two cents.

But in today’s Spanish Expression of the Day, we’ll focus on another very handy expression which includes the word grano – al grano to be exact.

Ir al grano means to get straight to the point, to cut to the chase or to spit it out.

So if you want someone in Spain to stop beating about the bush with what they’re doing or saying and get to the nitty-gritty, this is the expression to use.

Obviously it’s an informal expression which, just like in English, you should use with someone you know well and can afford to tell them to ‘get on with it!’.

Stop beating about the bush, man! Spit it out and tell me what’s up with you.

Enough with the messing around! Get on with it!

Juan got straight to the point and told María that he is in love with her.

For extra brownie points from your Spanish friends and family, you should learn the most famous lines of the catchy (and raunchy) 1991 hit Estoy Por Ti by Spanish pop duo Amistades Peligrosas, who sing: “Pero basta ya de tanta tontería, hoy voy ir al grano, te voy a meter mano” (Enough with all the silliness, today I’m cutting to the chase, I’m going to feel you up).

Different times the nineties, we’re not so sure that today’s political correctness would have allowed the duo to cut to the chase and sing about their true intentions.