It is difficult to imagine Switzerland without its cheese, but the heatwave and lack of water is playing a part in this worst-case scenario, with even the iconic Gruyère under threat.

Usually, Swiss cows spend the summer high up the mountains, grazing on Alpine pastures until they are brought down – sometimes with a bit of local ceremony – from the mountains onto the plain in the fall.

But this year’s heatwave  and drought have disrupted this traditional process – with parched meadows running short of both grass and water, forcing farmers in canton of Vaud to bring their cattle to the lower ground in the middle of summer.

Vaud agricultural authorities estimate that 60 out of Jura’s 200 mountain pastures are “in acute lack of water” and even though the canton is supplying water to the breeders, “the unprecedented heatwave will in any case affect the production of milk and cheese”, Le Temps daily reported.

READ MORE: EXPLAINED: Why are cows so important in Switzerland?

The situation is similarly dire in the canton of Fribourg, where the famous Gruyère cheese has been produced for centuries.

“The situation is tense, even critical”, according to Frédéric Ménétrey, director of the Fribourg Chamber of Agriculture, who said that 15 alpine pastures that are inaccessible by road are being supplied by private helicopters.

With “lack of water and dry grass”, milk production could be reduced by “20 to 30 percent”, Said Dominique de Buman, president of the Fribourg Cooperative of Alpine Cheese Producers.

This also means that less Gruyère will be made this year and, if heatwaves and droughts become a standard summer weather, “we must reflect on how to adapt the alpine economy and agriculture to global warming”, Éric Mosimann, manager of the Vaud Society of Alpine Economy, pointed out.

READ MORE: How Switzerland is protecting its cheeses from foreign influence 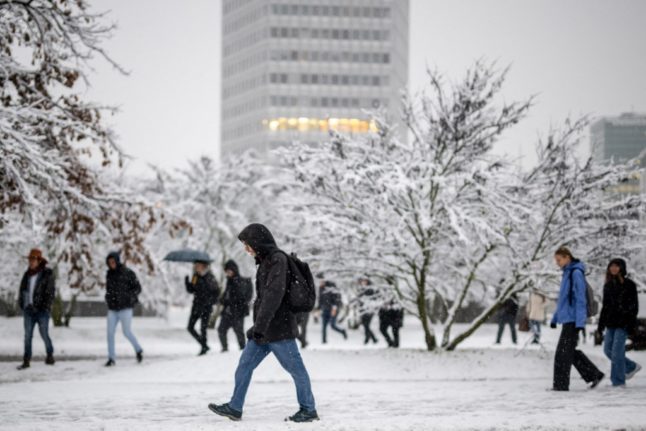 As temperatures in some parts of the country plummeted into double digits below zero, train traffic suffered as well, with some lines still impacted by the weather.

The most affected on the Swiss railway network is the Simplon line, which connects Lausanne with Brig (VS), as well as the Romont (FR) -Palézieux (VD) line, where trains were delayed due to frozen train switches.

Swiss Federal Railways (CFF) are working around the clock to repair any breakdowns and get the trains moving again.

In addition, the switches are heated to prevent them from freezing

This is an important measure, Schmidt said, because “this device allows us to avoid total chaos on the network and to restore regular traffic as quickly as possible.”

There is no word yet about how quickly the traffic will return to normal.

From one extreme weather to another

This situation is the opposite of what the SBB experienced in July 2022 during what has been described as the worst heatwave in decades.

At that time, rail traffic was disrupted because the tracks on which the trains and trams run were impacted by high temperatures. causing the so-called “track warping,” when tracks expand, deform, and become a safety hazard.

READ MORE : How the heatwave has impacted train travel in Switzerland