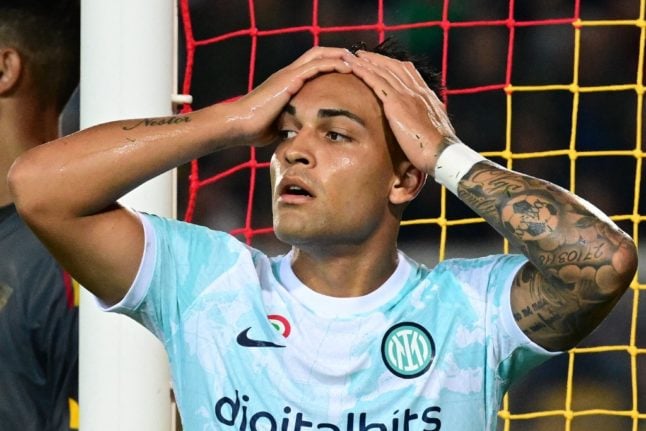 Inter Milan's Argentinian forward Lautaro Martinez reacts after missing a goal opportunity during the Italian Serie A football match between Lecce and Inter on August 13, 2022. (Photo by Vincenzo PINTO / AFP)

If you want to anger an Italian, one sure way is to take away their football games. This is exactly what happened on Sunday evening when the streaming platform DAZN logged users off just before the Serie A matches.

The bug couldn’t have come at a worse time.

The streaming platform has exclusive rights to the Italian first league, Serie A, and earlier this year announced a €29.99 monthly subscription and stricter rules limiting device access and blocking simultaneous viewing from different locations in an effort to curb “piracy”.

This is the first round of Serie A football matches since the new prices came in on DAZN. The championship is also coming back during the summer holidays when most Italians are home ready to watch their calcio, as Italians call soccer.

Many have complained that the new high prices come with a lousy service, with Sunday’s “blackout” only the most recent example. Users were given “emergency links” to log in, but many complained they could still not access the programme.

Not only did the hashtag #DAZN go up the list of Italy’s trending topics (and it still holds a premium spot over there), but the dispute became political.

The country’s Democratic Party (PD) said: “tens of thousands of citizens have paid for a service in advance and now suffer with a shameful disservice, in almost all parts of Italy, for the problems with DAZN Italy”.

The party called on Agcom, the regulator and competition authority for the communication industries, and Serie A to intervene.

Politicians from all political spectrums have commented on the issue, including Carlo Calenda, Matteo Salvini (Lega), and Maurizio Gasparri (Forza Italia). Football players such as Daniele de Rossi and other Italian celebrities also complained about the lack of service.

On Sunday evening, the streaming service released a statement, later deleted, recognising the connection issues. “Some users are currently experiencing access issues on our platform. We are working hard to find a solution as soon as possible and apologise for the inconvenience.”, the company said.

What will happen now?

Most of the politicians said they would bring the problems to parliament or Italy’s communication regulator. The main issue is DAZN’s exclusivity rights to Italian football.

The problems will likely influence future decisions on who has the rights to show the games – with broadcaster Sky, which used to have broadcast rights to the matches, looking into getting back on the field.

Of course, nothing is certain yet, and at least for this season, DAZN will continue to transmit games to its subscribers.

One thing seems to be sure, though: If there is one issue that can unite all Italians, it is football.

LIVING IN ITALY
What changes about life in Italy in February 2022? 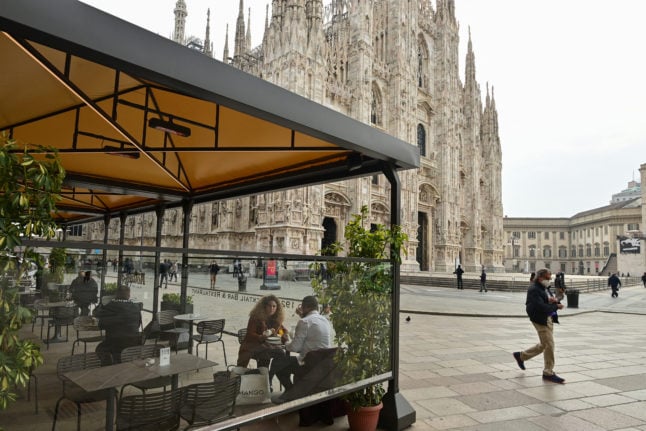 The mask mandate was originally meant to lapse on June 15th but it had been extended by outgoing health minister Roberto Speranza after an uptick in infections at the beginning of the summer.

Friday will also mark the end of mask-wearing requirements for those accessing healthcare facilities or care homes, whether they be visitors, patients or staff.

Although mask requirements have been lifted, staff and visitors will still have to produce a valid ‘super green pass’ – i.e. a health pass certifying that the holder has been fully vaccinated against or has recovered from Covid-19 – to access the above-mentioned facilities.

Barring any extension, the ‘green pass’ mandate will expire on December 31st.

In particular, Ryanair staff will hold a 24-hour walkout, whereas Vueling staff will strike for a total of four hours, from 1pm to 5pm.

It’s still unclear the extent to which the strike will affect passengers, though significant delays or cancellations can not be ruled out.

Energy bill changes – for some

Those on old Maggior Tutela ‘protected’ contracts governed by Italy’s energy regulator Arera – that’s around one third of Italian households – could find their energy bills spiking from October 1st.

Arera sets electricity and gas tariffs based on market rates, and usually updates them quarterly. From October, however, prices will be updated monthly, and instead of being indexed to the Amsterdam energy exchange, rates will be tied to the Italian virtual exchange point (PSV).

It’s unclear at this stage exactly what effect this will have, but the research institute IRCAF has warned that it could result in bills doubling. For its part, Arera has said the move will protect consumers and guarantee the continuity of supplies.

The majority of Italian households have transitioned away from the Maggior Tutela system – which is due to come to an end completely from January 2023 – and on to free market contracts with private companies since Italy’s energy market opened up to competition.

Those on fixed rate contracts with private companies should be protected from further price hikes until May 2023, under the terms of the decreto bis aid decree.

Aside from Cervinia’s early start, all the other ski resorts in the Aosta Valley region will open their doors to the public on November 26th provided that there is enough snow on their slopes.

(Some) households allowed to switch on heating

Italy has restrictions on when (and how much) you’re allowed to heat your home, and the first places to be allowed to crank up the thermostat are northern and mountainous parts of the country, usually starting from-mid-October.

Italy is divided into several categories depending on when authorities think it’s appropriate to turn the heating on in each area.

Those in the warmer coastal areas in places like Sicily and Calabria are last to be permitted to flick the switch on at the start of December. Here’s when you can turn your heating on in a typical year in Italy.

This year, because of the ongoing energy crisis caused by Russia’s war on Ukraine, the date on which the first households can turn on their heating has been pushed back one week to October 22nd (with concessions for areas where particularly bad weather is forecast).

The maximum number of hours the heating can be switched on over the course of the day has been reduced from 14 to 13 hours.

Pensions under a certain threshold are set to rise by two percent from October 1st thanks to measures contained in the aiuto bis aid decree.

A reevaluation of pensions usually takes place in Italy at the start of each calendar year, but the process has been brought forward by three months to combat the cost of living crisis.

The increase affects those on pensions of up to €35,000 per year; pensioners on higher incomes will receive a 0.2 percent rise from November.

After the hard-right centrodestra coalition emerged as the victors in Italy’s September general elections, negotiations are now underway to form a new government.

The process has in the past taken anywhere from four to twelve weeks, which means the country could see a new government sworn in by the end of the month – but it’s not a given.

At 3am on Sunday, October 30th, the clocks will go back by one hour, marking the end of summer time.