It's not completely clear from the Migration Agency's website what criteria you need to fulfil to qualify for a sambo visa in Sweden. Photo: Lieselotte van der Meijs/imagebank Sweden

An American reader, whose son lives with his Swedish partner, wrote to The Local with questions about the maintenance requirement her son and his partner must meet in order to qualify for a sambo resident permit.

“Their specific issue is that they meet the requirements for a stable relationship and stable housing, but have been told that qualifying for a sambo visa based on savings is unlikely,” she wrote, asking for suggestions on how to approach this issue. Her son’s partner is a student with no income, but whose savings meet maintenance requirements. But, they have been told by lawyers that Migrationsverket will likely deny the application based on the absence of the Swedish partner’s income.

How do relationships qualify for sambo status?

In order to apply for a residence permit on the basis of a sambo relationship, you and your partner must either be living together, or plan to live together as soon as the non-Swedish partner can come to Sweden. Because this reader’s son is already in Sweden as a graduate student, he can apply for a sambo permit without having to leave the country, provided that his student permit is still valid at the time the new application is submitted.

The Migration Agency notes that “you can not receive a residence permit for the reason that you want to live with a family member in Sweden before your current permit expires”. So once your valid permit is close to expiration, you can apply for a new sambo permit.

What are the maintenance requirements for a sambo permit?

The maintenance requirements for someone applying for a sambo permit fall on the Swedish partner, who must prove that they are able to support both themselves and their partner for the duration of the permit. This includes both housing and financial requirements.

In terms of residential standards that applicants must meet, they must show that they live in a home of adequate size – for two adult applicants without children, that means at least one room with a kitchen. If rented, the lease must be for at least one year.

The financial requirements are more complicated. The Swedish partner must be able to document a stable income that can support the applicant and themselves – for a sambo couple, the 2022 standard is an income of 8,520 kronor per month. This burden falls on the Swedish partner.

While the Migration Agency’s website does say that you may “fulfil the maintenance requirement (be considered able to support yourself) if you have enough money/taxable assets to support yourself, other persons in your household and the family members who are applying for a residence permit for at least two years”, it is unclear how proof of this would be documented. On a separate page detailing the various documents that can be used to prove that maintenance requirements are met, there is nothing about how to document savings that will be used to support the couple.

Can you apply on the basis of savings instead of income?

Well, this is unclear. The Migration Agency’s website does suggest that having enough money saved up to support both members of the sambo relationship is an option, but it gives no details on how to document this. It is also unclear whether applying on the basis of savings will disadvantage applicants, with preference given to applicants who can show proof of income from work.

The Local has reached out to an immigration lawyer to answer this question. 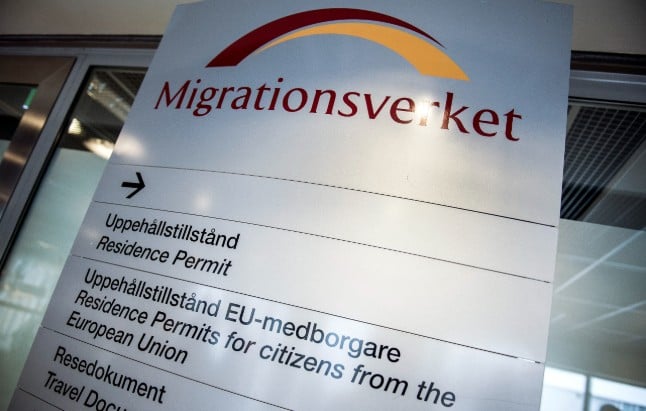 After just a day, the petition has already been signed by 2,700 people at the time this article was last updated, indicating just how many are being affected by the long processing delays at the agency. Some foreigners in Sweden are currently having to wait for as long as 15 months to have their work permits renewed, leaving them unable to visit relatives and loved ones back home.

Fredrik Bengtsson, the director at the agency responsible for work permits this week told The Local that the delays were the result of new rules that came into force in June, the need to redeploy staff to handle refugees from Ukraine, and a post-pandemic surge in applications.

The petition was launched on Thursday by Dina Ahmad, a Lebanese IT professional, who has herself been waiting five months for a renewal.

“I decided to launch this petition because I have seen this affect many people,” she told The Local. “I have heard tragic stories about people who could not go back home to see their relatives before they passed away.”

She heard of one person who had to wait 23 months for a renewal, which as the permit was only valid for two years, meant they had only one month of validity left when they finally received it, meaning they had to immediately go through the entire process again.

In the petition, she complains about the “incomprehensible” rule that people from countries that require a visa to enter the EU who leave Sweden while waiting for a work permit decision may not be allowed to return to Sweden.

“It is a huge injustice that residents who are here working and paying taxes are unable to return to the country and resume their jobs should they decide to leave,” the petition states. “Many need to visit their families, deal with paperwork back home, or just take a break.”

The petition notes that other EU countries do not have this rule, with Denmark, for instance, having a “re-entry permit”, or “tilbagerejsetilladelse”, allowing those waiting for decisions to return home.

It also notes that the Migration Agency has already started issuing so-called D-visas so that people waiting for work permit decisions can attend business meetings abroad.

“We ask that a solution can be found wherein residents can travel and be able to come back and resume their work in Sweden while waiting for a decision,” they state. “Perhaps the D-visa can be extended to allow non-business related travel as well.”

The Migration Agency’s press office told The Local that the introduction of the D-visa had been part of the package of work permits reforms which came into force in June, and was not a decision taken by the agency.

“That’s regulated in the law and nothing we have decided,” Lisa Danling said. As the D-visa only applies to work trips, the agency has no power to issue a visa for other journeys outside Sweden.

READ ALSO: Why is it taking so long to get work permits in Sweden?

Moataz Mohamed, one of the signatories, wrote under the petition that the delay in processing his new work permit had prevented him from “going home to get married to the love of my life”.

“With the increasing time for a decision, we can’t even plan anything or book a venue. At the same time, my father is sick and if something happens to him, I can’t even think of what to do,” he wrote on the petition. “This rule is prejudiced and borderline racist.”

Hyder Ali Mohamed, another signatory, wrote that despite working for a certified company, he had been waiting for permanent residency for more than 25 months.

“Last time we visited our families and friends back home was more than four years ago, and we will never see some of our closest family members ever again who passed away last year,” he wrote. “The sad part is that even after informing this multiple times to the case officer, he is not making a decision.”

“Imagine being locked in a place and not allowed to move out of the country for the reason of delayed process for months or even a year,” wrote Suneel Seelam, another signatory. “I know the pain of it myself and have seen friends of mine suffering from it. I like to travel at least once a year, and for some family reasons people have to travel.”