Tactical firefighters in yellow suits, and supporting firefighters, set fires to burn a plot of land as they attempt to prevent the wild fire from spreading due to wind change, as they fight a forest fire near Louchats in Gironde, southwestern France on July 17, 2022. - France was on high alert on July 18, 2022, as the peak of a punishing heatwave gripped the country, while wildfires raging in parts of southwest Europe showed no sign of abating. (Photo by THIBAUD MORITZ / AFP)

Europe’s increasingly frequent heatwaves are back under the spotlight over devastating wildfires and with sweltering temperatures forecast to hit record highs in Britain and France this week.

On Monday July 18th the European Commission warned that more than half of the EU territory was a risk of suffering a drought due to the lack of recent rainfall and the scorching temperatures.

A heatwave engulfing western Europe, the second in a month, sparks huge wildfires and threatens to smash records in Britain and France.

Fires in France, Greece, Portugal and Spain force thousands of residents and tourists to flee and kill several people, including a Spanish shepherd and a firefighter. 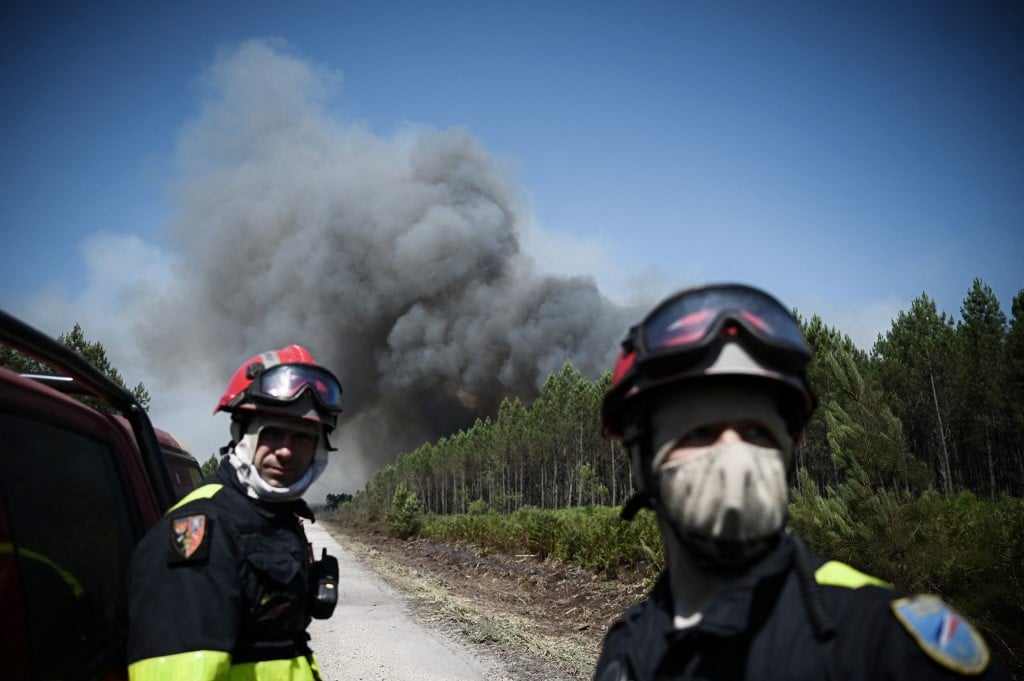 Firefighters stand on a road as heavy smoke is seen in the background during forest fires near the city of Origne, south-western France, on July 17, 2022. (Photo by Philippe LOPEZ / AFP)

Britain braces for an all-time high of 40 degrees Celsius (104 degrees Fahrenheit) or more. Brittany in France could also register similar temperatures in what would be a regional record.

The weather warnings come hot on the heels of a scorching spell in June, where parts of Europe, from Spain to Germany, sizzled at unseasonal highs of between 40C to 43C.

Between late July and early August 2021, Greece endures what Prime Minister Kyriakos Mitsotakis calls the country’s worst heatwave in over 30 years, with temperatures hitting 45C in some regions. In Spain, temperatures reach 47C in parts of the south, according to national weather agency AEMET. 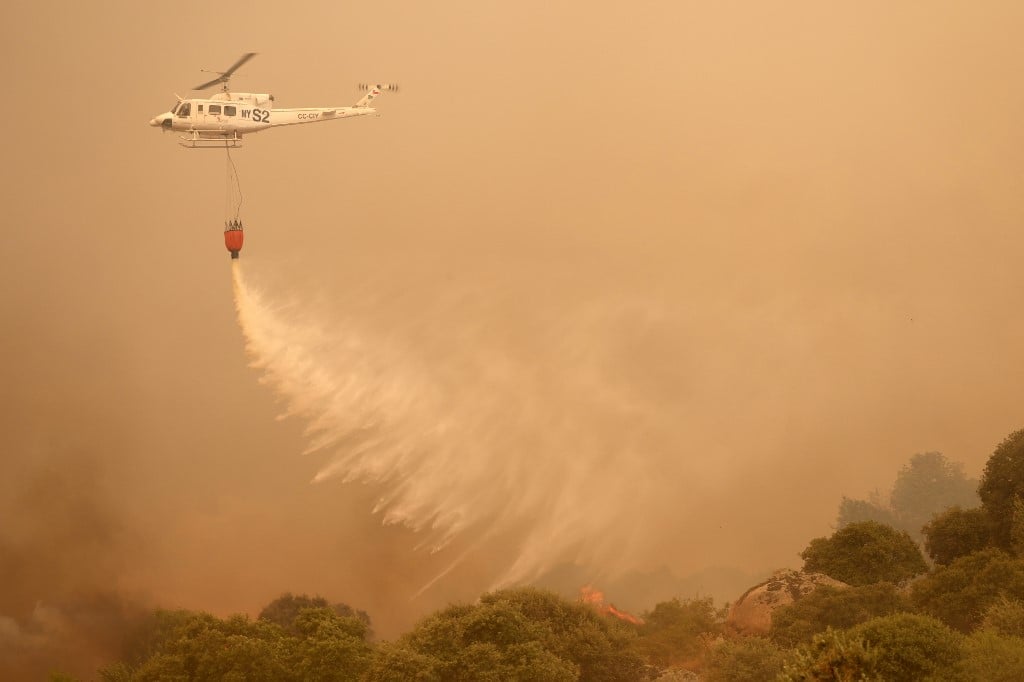 A helicopter drops water as fires rage in Navalmoral de la Sierra near Avila at center of Spain on August 16, 2021. (Photo by CESAR MANSO / AFP)

The heat and drought spark large wildfires along the Mediterranean, from Turkey and Greece to Italy and Spain.

The summer of 2019 brings two heatwaves, which leave around 2,500 people dead, according to the Centre for Research on the Epidemiology of Disasters of Belgium’s Louvain University.

In France, temperatures hit a record 46C on June 28 in the southern town of Verargues. Thousands of schools are closed. 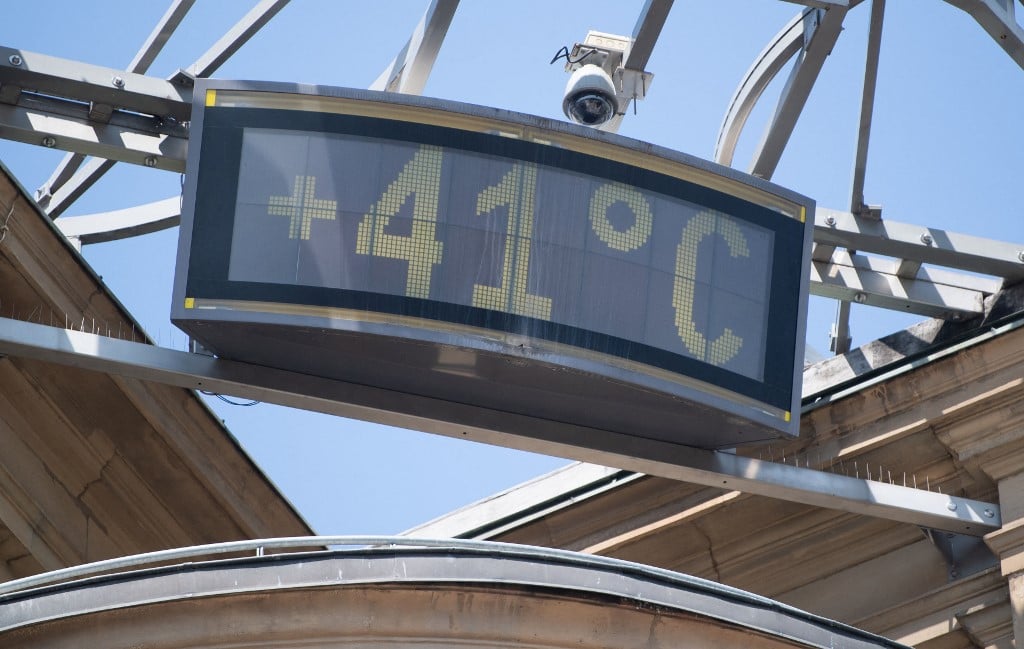 A picture taken on July 25, 2019 shows a board displayed in an office building and reading 41 Celsius in Stuttgart, as a new record high temperature was recorded in Germany, amid a Europe wide heatwave, breaking the previous hottest figure reached the previous day. (Photo by Marijan Murat / dpa / AFP) / Germany OUT

On July 24 and 25, northern Europe fries in record heat. Temperatures of 42.6C are recorded at Lingen in northwestern Germany, 41.8C in Begijnendijk in northern Belgium and 38.7C in the eastern English city of Cambridge.

The second half of July and beginning of August 2018 sees very high temperatures across much of Europe and rivers running dry due to drought.

The Danube falls to its lowest level in 100 years in some areas, notably exposing World War II tanks in Serbia that were submerged since the conflict.

Much of Europe, but especially the south, sweats from late June to well into August.

Spain set a record of 47.3C on July 13 in the southern town of Montoro.

It’s heatwave after heatwave throughout the summer of 2015 which leaves an estimated 1,700 people dead in France.

In Britain, roads melt and trains are delayed in the hottest July on record, with temperatures reaching 36.7C at Heathrow airport.

Central and southern Europe are parched by drought throughout June and July, provoking a spate of forest fires in Italy, North Macedonia and Serbia. 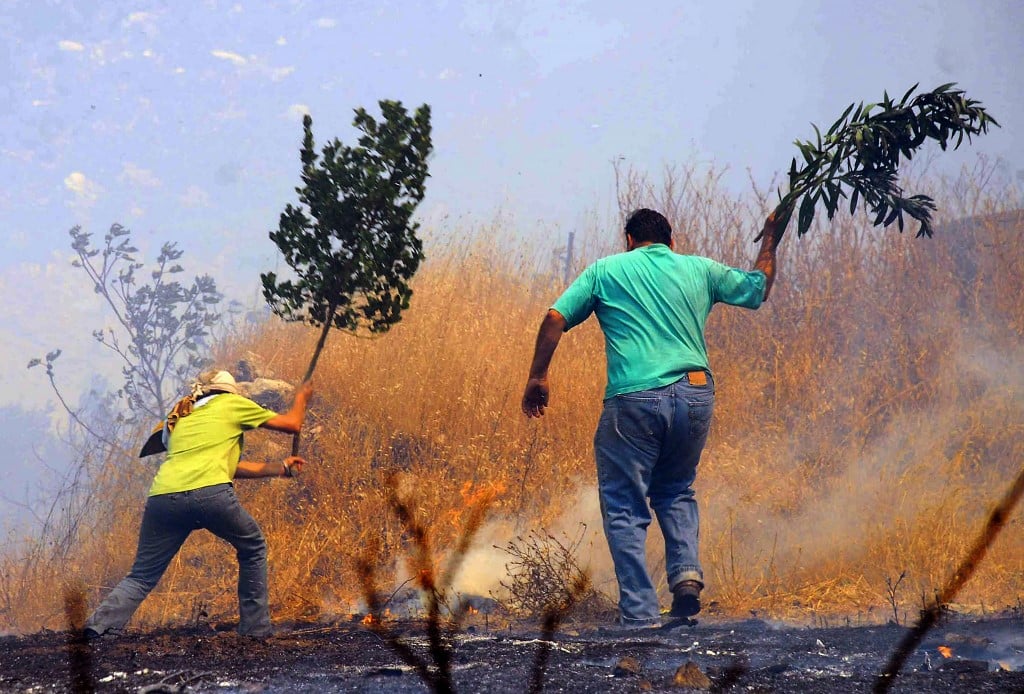 Locals use branches to estinguish a fire in Kato Kotyli village in central Peloponnese 30 August 2007. The fires that wrought a trail of destruction across Greece for a week were mostly under control as people counted the cost of a disaster that has claimed 63 lives. (Photo by Yiannis Dimitras / AFP)

In Hungary, 500 people die as a result of the heat.

Britain, France, Italy, Spain and Portugal all experience exceptional heat in the first half of August, with Portugal suffering a record 47.3C at Amareleja in the south.

An EU study of 16 nations puts the number of excess deaths across the bloc during the heatwave as high as 70,000, with France and Italy each seeing between 15,000 and 20,000 fatalities, according to various reports since. 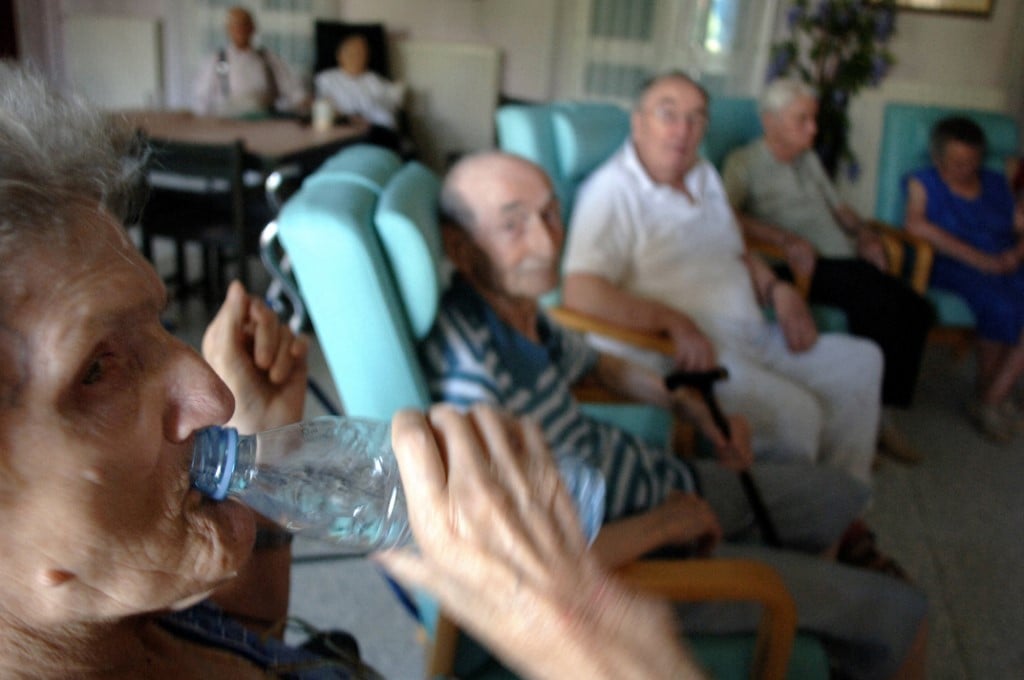 The 2003 heatwave in France caused the deaths of many elderly people and led to a change in the government’s approach to dealing with heatwaves. PHOTO JEAN-PHILIPPE KSIAZEK (Photo by Jean-Philippe KSIAZEK / AFP)

In France, most of the victims are elderly people in an episode that traumatises the country and leads to the implementation of new systems of protection during heatwaves.

When the four-storey building was built behind the beach in the southwestern Gironde region in 1967, it stood 200 metres away from the shoreline.

But its 75 or so flats in the town of Soulac-sur-Mer had to be evacuated in 2014 after the sea crept up to within 20 metres of the structure.

Local authorities scrambled to rid the building of asbestos in the following years, before a huge mechanical digger took a swing at its facade on Friday, as several former residents looked on.

“It’s the memories of four generations” that are being destroyed, said 76-year-old Vincent Duprat, one of the home owners.

The sea “has taken back what is rightfully hers”.

MAP The French towns at urgent risk from coastal erosion

Environment Minister Christophe Bechu said the demolition was a sign of “what the rising waters and coastal erosion have is store for lots of other areas along the French coastline”.

Erosion is a natural phenomenon that has helped shape our continents over millennia.

But scientists say it is being accelerated by the warming of the planet, exacerbated by rising sea levels brought about by melting ice caps and glaciers, and by the more powerful waves that warmer oceans hold.

The sandy beaches of the Bay of Biscay between France and Spain are expected to recede by 50 metres by 2050, the Observatory of the Nouvelle-Aquitaine Coastline says.

But climate change and rising sea levels could increase this by an extra 20 metres in some areas, the Observatory’s Nicolas Bernon said.

In 2020, after a seven-year legal battle, a court ruled that French authorities should compensate families who had been forced to evacuate the building in Soulac-sur-Mer to the tune of 70 percent of the original value of their homes.