People cool off at the seaside in Ostia on the outskirts of Rome. Photo by Filippo MONTEFORTE / AFP

August is here and Italy is bracing for another heatwave after already enduring months of extreme weather.

While heat in August is not exactly unusual, temperatures across Italy are expected to be 10 or even 15 degrees higher than average for the month, meteorologists warn.

READ ALSO: The 7 signs that August has arrived in Italy

For the coming heatwave, “the peak of heat will reach our country between Thursday and Friday, especially in the northern and central regions and on the Tyrrhenian side, with 39-40°C in the shade likely,” according to weather website Il Meteo.

The most oppressive heat and humidity is then expected to be felt in the south of the country over the weekend, though areas on the Adriatic coast are forecast to be less affected.

Storms are also forecast in Alpine areas and over the central Apennine mountain range by the end of the week.

The Italian health ministry has maximum level ‘red alert’ heat warnings in place already on Wednesday and Thursday for the cities and provinces of Perugia and Palermo, with Rome added to the list on Friday.

‘Red’ heat warnings signify extreme conditions that can be harmful to the health of the general population.

Predictions of 40°C are no longer surprising to anyone, Il Meteo’s forecasters say, “however it is worth remembering that the average climatological values ​​at the beginning of August are much lower”.

Records from the period between 1971-2000 show Italian cities usually reach maximum August temperatures far lower than those forecast this summer.

The hottest local readings (34°C) came from the weather station at Catania Sigonella “in the hot inland areas of eastern Sicily in the province of Syracuse,” Il Meteo explains, “where a year ago, on August 11th, 48 degrees was recorded; 8°C above the previous European record.” 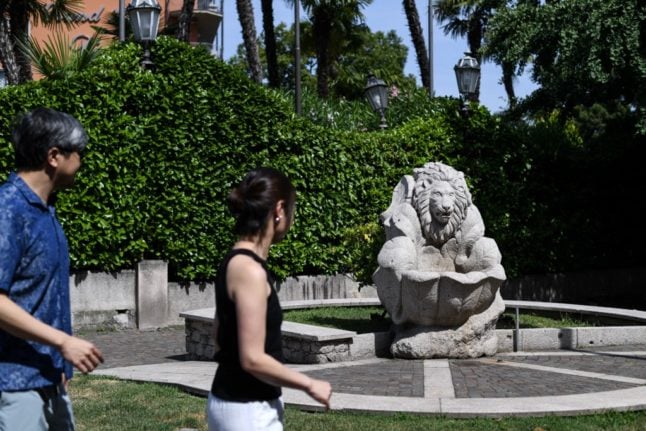 Many towns and cities in northern Italy, including Milan, have switched off their public fountains amid water shortages this summer. Photo by Piero CRUCIATTI / AFP

“These exaggerated values ​​are an example of an extreme weather event predicted by environmental researchers; they represent the prediction that numerous industrialised countries have denied for decades.”

Europe has already experienced a series of unusually intense and lengthy heatwaves in June and July, and those extreme temperatures are expected to continue across the continent in August.

“Probably this time Europe will break records for the month, and not the annual values, but the European warm-up will be very important and decisive,” writes Il Meteo meteorologist Lorenzo Tedici.

In Italy, the especially hot and dry conditions this year so far have already resulted in the worst drought in 70 years and a wildfire season three times worse than average.

The Italian government has released official advice on preparing for the hottest part of the year.

This includes avoiding going outdoors at all between 11am and 6pm; wearing a light-coloured hat, sunglasses and sunscreen when outdoors; taking periodic showers to reduce body temperature; and drinking at least two litres of water a day.