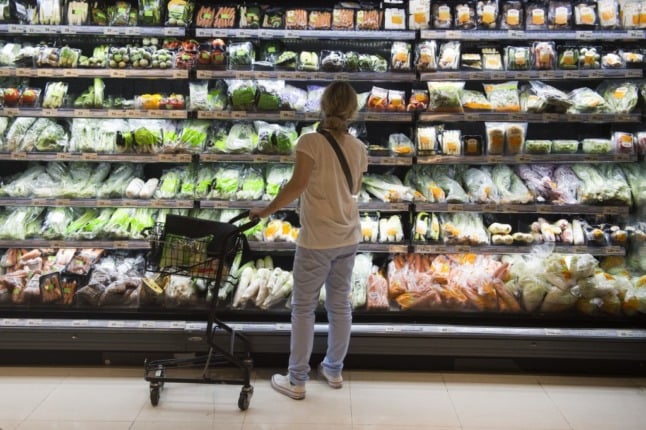 The new Wiener Späti doesn't look like a typical grocery store but does provide 24/7 access to a range of products. (Photo by Romeo GACAD / AFP)

In a country where almost all supermarkets and stores close at 8pm at the latest – and don’t even open on Sundays – the four new vending machines might be the only solution for some people in the capital during the late-night hours.

The idea, which was inspired by 24/7 kiosks in Berlin, was brought to Vienna by DJ and event promoter DJ Mosaken and his friend Christopher Neudeck.

The concept was then adapted as vending machines as it is not legally possible in Austria to keep business places open 24h, Der Standard explains.

Speaking about the selection, DJ Mosaken said: “We focus on what suits us and on what we want to present to people.”

According to Der Standard, drinks at the Wiener Späti are on average 70 cents to €1 more than expensive than in regular grocery stores. A bottle of white wine from Heurigen Muth costs €12 and a three-pack of condoms is €6.90.

READ ALSO: Why everything in Austria is closed on Sundays – and what to do instead

In a comparison with prices at Spar, a packet of spaghetti at the Wiener Späti costs €2.50, whereas at Spar it is €0.99.

Although the Späti concept of selling a range of products 24/7 is new for Vienna, there are already beer vending machines dotted across the city. There is also the “Foodie Fridge” in the 2nd District that offers lemonade and home cooked food around the clock from a vending machine.

Outside of Vienna, vending machines can be found at pharmacies for out-of-hours access to items like plasters and condoms, and it’s common in rural areas to find cheese and vegetable kiosks operating under an honesty box system.

The ‘Späti’ – short for Spätkauf which means ‘late shop’ – is common place all over the German capital and became increasingly important during the Covid pandemic.

Please note: As at March 30th, this plan is currently on hold. Please click here for more information.

This week, Austrian officials announced a hard Easter lockdown in the east of the state.

From April 1st until April 6th, the states of Vienna, Lower Austria and Burgenland will enter a hard lockdown.

While the lockdown should end on April 6th, it may be extended if infection rates and hospitalisations remain high.

What is the plan as it currently stands?

If shops open again on 7th April following the Easter lockdown in Vienna, Lower Austria and Burgenland (from 1st April to 6th April), you will need a test to go shopping, according to the latest plans of the Ministry of Health.

Will I need a negative test result to visit all shops?

Not all shops. Some retail outlets, such as those providing vital services, appear to be be exempt.

For example you can go to supermarkets, pharmacies, banks and post offices without a test, reports Austria’s Kurier newspaper.

As it stands, it appears the shops with a negative test requirement will be those considered ‘non-essential’ by the government which are not allowed to open from April 1st to 6th.

How could a test requirement work in practice?

Although more details are forthcoming, Austrian media reports that the system may be similar to that currently employed for close contact (i.e. body-hugging) services like hairdressers and cosmetic services.

Austria’s Kurier newspaper reports that the test would need to be less than 48 hours old, much like in rules for close contact services.

Alternately, it could mirror the system in place in Vorarlberg.

EXPLAINED: What is Austria’s compulsory testing requirement for visiting hairdressers?

In Vorarlberg, the only state in Austria to open up its restaurants and events so far, has done so with a test requirement.

In the western state, there is an online test platform which people can use to upload negative self-tests.

A digital confirmation of the test is used as a 24-hour entry certificate for events, as well as giving children aged under 18 the chance to participate in indoor sports.

A PCR test result is valid for 72 hours. An antigen test carried out under supervision by an authorised body gives access for 48 hours.

In Austria it is already necessary to show a negative recent PCR test result when visiting a hairdresser or other “body hugging” services, such as a manicurist or a tattoo parlour.

What exemptions could be in place?

What do the shopkeepers say about the plans?

The GPA union has criticised the corona access tests planned for retail in eastern Austria, saying they are “unrealistic” and “unsuitable for fighting pandemics”.

The union fears a test requirement may increase attacks on shop employees from disgruntled customers, many of whom already dislike the mask requirement in shops.

If tests were compulsory, the non-food trade would lose two thirds of sales, Rainer Will, managing director of the trade association, told the Kronen Zietung on Monday.

How likely is the plan?

One of the major stumbling blocks appears to be whether or not the plan can be supported under existing law, or whether a new amendment would need to be passed.

While the Austrian government is pushing ahead with the plan, it is expected to receive some serious opposition from the other parties in parliament.

Health Minister Rudolf Anschober however said he believes the Covid-19 Measures Act framework allows for the measure to be introduced, much as it has been for hairdressers and cosmetic services.

Vienna has announced today all people working or living in Vienna can be regularly tested for the corona virus free of charge using a PCR gargle test. People who drop off their tests at participating stores before 9am receive the result within 24 hours.

The Alles Gurgelt (everyone gurgles) website explains test results can be already be used to visit a hairdresser or in the future, to visit other businesses with a test requirement. Starting next week, up to 200,000 free PCR tests should be possible for all Viennese people every day.