A sex worker waits in the street. Photo: Valery Hache/AFP

Earlier this month, the Spanish Congress voted in favour of proposals to create legislation to crack down on prostitution, including harsher penalties for men buying sex and for those exploiting sex workers through pimping and trafficking.

With adverts for prostitutes, escorts, and euphemistic ‘massage parlours’ common online and around Spanish cities, as well as some women still working the streets in certain parts of town, prostitution certainly exists in Spain. But is it legal, or illegal? Or somewhere in the middle?

What is the current law, and what do the proposed changes involve?

There exists no single law that deals directly with prostitution in Spain. Prostitution was decriminalised in 1995, however, and its related activities, such as pimping, trafficking, and sexual exploitation are still illegal, and dealt with in Article 188 of the Criminal Code:

“Whoever causes a person of legal age to engage in prostitution or to continue to do so, with the use of violence, intimidation or deception, or by abusing a position of power or the dependency or vulnerability of the victim, shall be punished with a prison sentence of two to four years and a fine from 12 to 24 months. Gaining profit from the prostitution of another shall incur the same penalty, even with the consent of that person.”

Simply put, selling sex is not illegal in Spain but forcing someone into doing it is, as is gaining financially from it, even if that person consents. There are also rules against prostitution “in areas of public transit, or close to places where minors are (such as schools and parks) or in areas where there is a risk to the road safety.” 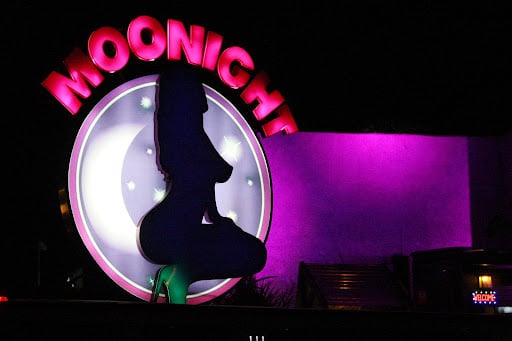 The illuminated sign of a brothel night club in La Jonquera in Spain. Photo: Raymond Roig/AFP

Although the clandestine nature of the business makes accurate data hard to find, according to a 2011 U.N. report Spain is the third biggest centre for prostitution in the world, behind only Thailand and Puerto Rico.

In 2016 UNAIDS estimated that over 70,000 prostitutes were working in Spain, but some estimates put that number as high 350,000. It is believed that 80 percent of them are foreigners, with many reportedly coming from Colombia, the Dominican Republic and Morocco.

TAMPEP, The European Network for the Promotion of Rights and Health Among Migrant Sex Workers, completed a study in 2009 that concluded 90 percent of sex workers in Spain were migrants. It found that almost half (49 percent) come from Latin America, around a quarter (24 percent) from Central Europe, often Romania and Bulgaria, and 18 percent from Africa.

Similarly, it is believed that many of the clients paying for sex – those who would be facing harsher punishments under the proposed legislation – also come from abroad, particularly traveling businessmen and truck drivers who take advantage of the legal grey area Spanish prostitution sits in.

However one in three men in Spain has paid for sex at least once in their lives, according to a 2009 survey by the country’s state-owned Social Investigations Centre (CIS).

The changes proposed earlier this month seek to further crack down on pimping and exploitation, and punish men purchasing sex, including harsher sentences if the victim is vulnerable or underage. The legislation, proposed by governing party PSOE, would not make prostitution outright illegal, but rather the exploitative activity that surrounds the business, and comes as part of broader attempts to reframe prostitutes not as criminals but as victims.

According to the draft, “agreeing to the practice of acts of a sexual nature in exchange for money or other type of provision of economic content will be punished with a fine of 12 to 24 months,” and makes clear that “in no case will a person who is in prostitution be punished.”

“In a democracy, women are not for purchase nor for sale,” Adriana Lastra, PSOE’s deputy secretary general, told Parliament.

After its introduction into Spain’s lower house earlier this month, 232 members from various political parties (including, crucially, both the governing PSOE and opposition PP) voted for the proposal, 38 against it and 69 abstained. The legislation will now bounce around the chamber as it is debated and amendments are suggested until it can be passed up to the Senate for confirmation.

The proposals have, however, caused some political debate. This is particularly true among feminists within the government, who are torn as to whether sex work is in itself exploitation or liberating, and maintain that the full scope of the legislation remains unclear.

Would the new law include strippers and exotic dancers, for example? This is unclear. So too is pornography, and popular payment websites such as OnlyFans.

It is hoped these interpretations will be ironed out during the debate and amendment stage.

Though ultimately the legal and organisational remits will remain, as before, in the hands of Spain’s regional governments, the proposed legislation seeks to establish a common framework of services, including minimum standards that all autonomous regions must comply with.

Crucially, among them, the regions will be compelled by law to provide ‘essential social services’ to all residents regardless of how long they have been registered on the padrón.

The padrón certificate is basically proof that shows where you are living. Your town hall – or ayuntamiento – uses it to find how many people are living in the area and what their ages are. If you plan on staying in Spain for more than three months and becoming a foreign resident in Spain, you are required by law to register for your padrón within this time.

Spain’s social service system, headed by Minister for Social Rights, Ione Belarra, provides support for the disabled, families, infants and teenagers, residential care and the homeless community, among many other disadvantaged groups.

As part of the draft bill, the requirement for a minimum time of registration or residence to access basic services will be removed, which will benefit not only Spaniards who have moved from one region to another, but foreigners who have recently become residents in Spain.

READ ALSO: Can I get my padrón online in Spain?

With this legislation, the Ministry of Social Rights aims to make Spain’s social services “more personalised, more comprehensive and inclusive” and remove barriers to care, according to sources within the Ministry.

“The aim is to lay the foundations for a new model of social services, a path that some regional legislations have already embarked on, far from a welfare-based approach and focused solely on emergencies,” the source added.

The bill is still in the draft stage, and the final text must be formally approved first by the Council of Ministers and then pass through the Spanish parliament. Once, and if, it is green-lighted by both those bodies, the Ministry will then have to agree with the regions which social services are specifically considered essential, and outline a catalogue of services that all regions will be obliged to guarantee to all residents, regardless of when they carried out their padrón registration.

The draft bill establishes that “all persons with effective residence in Spain are holders of the rights contained in this law, without any distinction or exclusion”.

Fortunately, however, that will not prevent or interfere with another of the new rules proposed in the legislation: the right of access to social services for people who spend seasons or periods outside their region, elsewhere within Spain.

In that sense, the social services model could become similar to public health in that all residents maintain their access rights, even if they are not registered in that region. For example: if a person who is registered with and receives social services in one region spends the summer in a beach house located in another region, the proposed law will establish that second regional administration (the one being visited) will take on the responsibility for social service previsions while they are there.