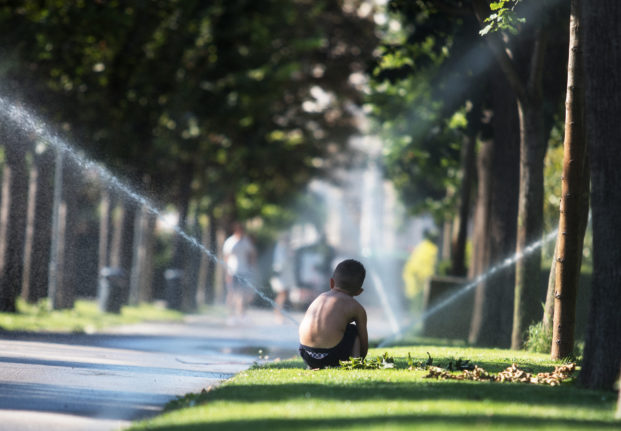 It's going to be scorching weather again today. (Photo by ALEX HALADA / AFP)

The war waged by Russia against Ukraine will dampen economic growth in Austria until 2026, according to a new medium-term forecast of the Economic Research Institute (WIFO). From 2022 to 2026, GDP growth is expected to slow down by half a percentage point on average.

Real growth of 2.1 percent a year is now believed to be more realistic in contrast to  the 2.6 percent a year growth assumed in November, broadcaster ORF reports.

However, the labour market will recover more quickly after the pandemic, according to the report. This year, Austria’s economy is likely to grow by 3.9 percent, as predicted in the spring forecast at the end of March – but by 2026 there will be a weakening to just 1.4 percent.

The labour shortage is having a positive effect on the unemployment rate: It is likely to reach the pre-crisis level of 6.7 percent this year and fall to six percent by 2026.

As The Local reported on Wednesday, Vienna and Innsbruck reached 30 degrees on Wednesday for the first time this year. It will be a bit hotter today with maximum values ​​of 23 to 31 degrees. Broadcaster ORF comments that this is ironic as it is also an Eisheiligen (Ice Saint) feast day –  which marks a period when May frosts are believed to typically appear. ​​

After Tyrol and Vienna, Lower Austria, Burgenland and Styria in particular could also reach 30 degrees for the first time. Tomorrow, a band of dense cloud will move across Austria, temporarily putting an end to the summer heat and bringing rain.

Burgenland, Carinthia and Tyrol are now the only federal states where there is still a high risk of coronavirus, according to Austria’s Covid-19 traffic light commission.

They will be classed as “orange” today by the commission. All other federal states will be given the status of “yellow” or medium risk. The risk levels are defined by the number of infections and also the amount of testing.

The Central Austrian Research Center for Post-War Justice, which collects files from the Austrian judiciary on dealing with Nazi crimes, has been honoured for its work on remembering the Holocaust with a Simon Wiesenthal prize.

The Austrian Karl Pfiefer also received a Simon Wiesenthal prize in recognition of his work of remembering the Shoah, along with  Lily Ebert from Great Britain, Zwi Nagal from Israel and Liliana Segre from Italy.

The prizes were awarded yesterday by National Council President Wolfgang Sobotka (ÖVP) in Parliament in the Hofburg.

Austria’s government has made a surprise announcement that it intends to present its plans to reform care on Thursday morning, describing it as the largest care reform in recent decades. The reform will be presented by Social Affairs Minister Johannes Rauch (Greens), ÖVP club chairman August Wöginger and Greens club chairman Sigi Maurer.

The opposition SPÖ party has called for care workers undergoing training to be allowed to contribute to the pension system during this period, while the SPÖ pensioners’ association has called for its own state secretariat for care.

The charity Diakonie’s director Maria Katharina Moser  has called on the Rot-Weiss-Rot working permit rules to be relaxed for care workers in Austria. She told broadcaster ORF that the age limits should be abolished for all shortage occupations – but especially for the nursing and care sector. She also said some language skill requirements could be jettisoned, as knowledge of English was not crucial for the nursing professions.

Other reforms which have been suggested are bringing in uniform conditions and training opportunities nationwide, uniform care standards in all federal states, the recognition of care services and a reform of the job descriptions in the care industries.