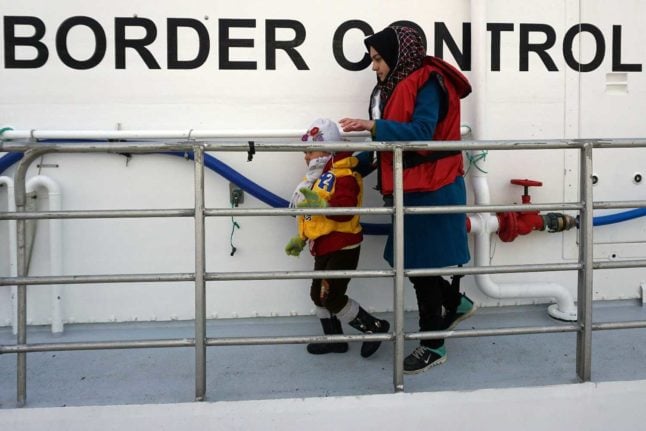 Two people on a Norwegian Frontex boat near the Greek island of Lesbos. Photo: STR / AFP

Switzerland’s government and parliament have already decided the wealthy Alpine nation, which is not in the European Union but is part of Schengen, should participate in the agency’s planned expansion.

But opponents have slammed the decision and forced the issue to a referendum under Switzerland’s famous direct democracy system.

Opinion polls indicate Swiss voters back the expansion, with the latest survey showing 69 percent in favour.

Here is an overview of what is at stake:

The European parliament decided to strengthen the agency in the wake of the 2015 migrant crisis. It voted in 2019 that over the next eight years, Frontex should be equipped with a permanent contingent of 10,000 border guards and coast guards.

Switzerland has been closely cooperating with the EU on security and asylum since 2008, and participating in Frontex since 2011.

The landlocked country in the heart of Europe has cooperated on joint flights coordinated by the agency to send back migrants and reject asylum seekers.

According to the plan, Switzerland should gradually increase its contribution from six to 40 full-time positions at the agency by 2027.

It should also nearly triple its financial contribution to Frontex to 61 million Swiss francs ($62 million, 58 million euros) annually, up from 24 million francs in 2021.

But the No Frontex committee, made up of various migrant support organisations and with backing from left-leaning political parties, opposed the move and collected enough signatures to force a referendum.

Opponents insist Switzerland should not take part in “human rights violations”, pointing to frequent accusations against Frontex of illegally returning migrants across EU borders, or of turning a blind eye when national authorities themselves carry out such “pushbacks”.

Switzerland’s political right meanwhile fully backs the expansion, including the populist right-wing Swiss People’s Party (SVP), which frequently campaigns against any agreements between Switzerland and the EU.

But there are splits on the issue within Switzerland’s largest party, with some SVP members calling for a “no” vote in the hope that the country will leave Frontex and regain “autonomous control” of its borders.

Frontex: How Switzerland’s ‘border vote’ on May 15th could impact travel

The government has warned if voters reject the expansion, Switzerland risks automatic exclusion from the Schengen area.

To avoid getting kicked out, a committee consisting of Swiss representatives, the European Commission and EU member states would need to reach a unanimous agreement within 90 days.

“It is too early to speculate on the result of the vote,” a Commission spokeswoman in Brussels told AFP. According to the government, the consequences of a Swiss exit from Schengen “would be felt daily, including through restrictions on the freedom to travel, and would lead to increased costs across the economy”.

“This cooperation is necessary, and it is beneficial for Switzerland,” Swiss Justice Minister Karin Keller-Sutter said.

What else is at stake on May 15th?

Sunday, May 15th, sees the latest round of Swiss referenda.

READ MORE: EXPLAINED: What’s at stake in Switzerland’s May referendums?

On a federal level, three questions are up for consideration: Netflix and streaming, organ donation rules and Frontex. More information on these votes are available at the following links.

READ MORE: What is the ‘Netflix vote’ and how could it change TV in Switzerland?

EXPLAINED: What Switzerland’s ‘organ donation’ vote means for you

Frontex: How Switzerland’s ‘border vote’ on May 15th could impact travel

There are also dozens of referendum questions being asked at a cantonal level all across the country.

In Zurich, voters will go to the polls to decide on several questions.

Perhaps the most relevant for Local readers is the referendum on improving the naturalisation process, including making the system uniform across each of the canton’s 162 municipalities.

Detailed information is available at the following link. 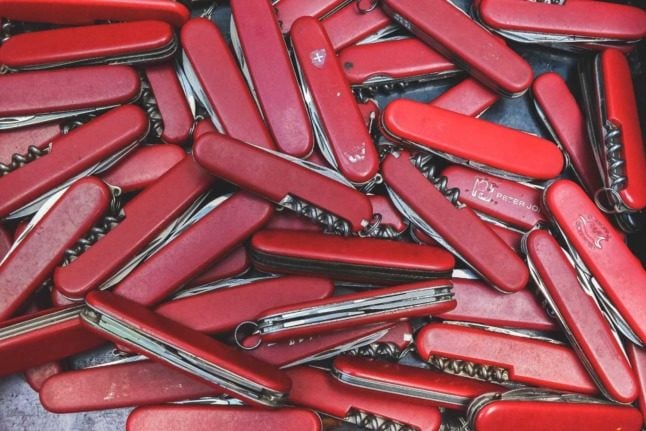 The vote passed with 69.1 percent support, making it the most popular of the four initiatives put to the polls.

Around 350,000 foreigners live in Zurich, which is roughly one quarter of the population – although the percentage is as high as 50 percent in some municipalities.

The successful proposal called for Zurich’s naturalisation process, including the citizenship exam, to be made uniform across all 162 municipalities.

The questions in the exam will now be centralised on a cantonal level.

The test will include 350 questions about Swiss history, tradition, politics and culture, with a focus on Zurich.

Anyone taking the test will be given 50 questions at random and must answer at least 30 correctly to pass.

More information about the citizenship process in Zurich can be found at the following link.

What else was decided on Sunday?

Voters in Zurich also decided to reject a proposal to lower the voting age to 16, with 64.1 percent saying ‘nein’ to the proposal.

A proposal to provide for more parental leave – and even up gender imbalances between fathers and mothers – was also rejected.

A detailed breakdown of the vote can be seen here.