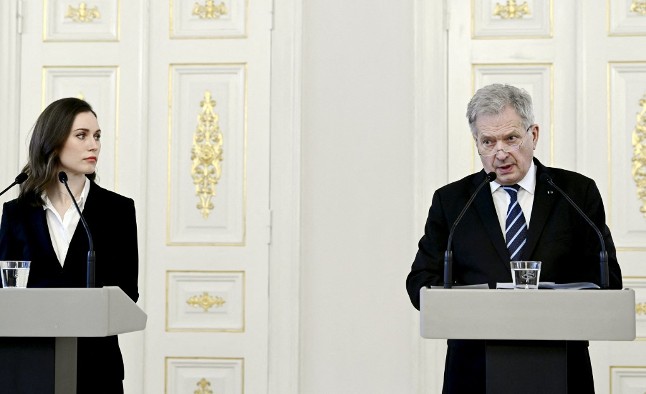 In a joint press statement, Niinistö and Marin said that Nato membership “would strengthen Finland’s security” and that Finland’s membership would “strengthen the entire defence alliance”.

“Finland must apply for Nato membership without delay,” they continued.

“We hope that the national steps still needed to make this decision will be taken rapidly within the next few days.”

Although Finland’s Nato decision does not come as a surprise, it will influence the likelihood of Sweden deciding to submit an application to the alliance, Sweden’s foreign minister Ann Linde said to SVT News.

“Now the president and the prime minister have made a clear statement,” she said. “Throughout the entire process, we have been in close cooperation with Finland on all levels. Finland’s statement affects our analysis, we take account for that in the analysis we will present in our report tomorrow.”

On Friday May 13th, a governmentally-appointed group consisting of MPs from all parties will present a report assessing possible Nato membership from a security perspective to parliament. The report is not expected to state whether Sweden should join the alliance or not.

The Social Democrats will make an official statement on whether to join the alliance on Sunday, and an extra parliamentary meeting on Nato is scheduled for Monday.

Linde told SVT that she has a clear impression of what Sweden’s message on Nato membership will be, but she does not want to circumvent the official process.

Sweden’s defence minister Peter Hultqvist told SVT that he “had expected this”, echoing Linde in saying that Finland’s statement will affect Sweden’s decision on whether or not to join Nato.

“We will make a Swedish decision based on Swedish analysis and Swedish conditions, but it is obvious that a Finnish statement of this kind is something that we must also include in our overall analysis and our assessment of how we should proceed,” he told SVT.

Denmark’s prime minister Mette Frederiksen welcomed the message, saying on Twitter that Denmark will welcome Finland to the alliance and do “everything possible” to ensure a swift application process after Finland’s formal application.

PM Frederiksen ”Strong statements from the Finnish President and the PM. 🇩🇰 will of course welcome 🇫🇮 wholeheartedly in NATO. Will strengthen the Alliance and our common security. DK will do everything possible to support a swift application process after the formal application.”

Estonian prime minister Kaja Kallas also welcomed the announcement on Twitter as “history being made by our northern neighbours”, adding that Estonia “support a rapid accession process” and will make “necessary steps quickly”.

Sweden will send an application to join the Nato alliance on Monday, tabloid Expressen reports, stating that the information comes from sources close to the newspaper.

According to the newspaper, Magdalena Andersson will call a governmental meeting where the decision whether to join Nato or not will be made. Social Democrat leadership have stated that the question is still up for debate, but it is expected that the government will announce their intention to apply to join Nato.

Directly after this meeting, Expressen reports, Sweden will submit their application to join Nato.

On Tuesday May 17th, Niinistö will be in Sweden for a two-day state visit, which will include a “bilateral consultation” with Andersson.

“Of course,” Sanchez replied, when asked at the World Economic Forum in Davos, Switzerland, if the two nations would send delegations to the June 28-30 gathering.

“They are big democracies, very well established and consolidated democracies, and I think it is also very important for Nato and the European Union to have them on board as NATO allies,” he added.

Spain will speed up its parliamentary procedure to give its backing for the entry of the two nations in the alliance, the prime minister said.

Sweden and Finland applied to join the transatlantic alliance in the wake of Russia’s invasion of Ukraine on February 24.

But all 30 of Nato’s members must approve the enlargement, and Turkey has warned it will not support their applications as things stand.

Ankara has long accused Nordic countries — in particular Sweden, which has a strong Turkish immigrant community — of harbouring outlawed Kurdish militants as well as supporters of Fethullah Gülen, the US-based preacher it accuses of being behind a failed 2016 coup.

The two countries’ bids to join Nato constitutes one of the most significant changes in Europe’s security architecture in decades, not least because Finland shares a 1,300-kilometre (800-mile) border with Russia.