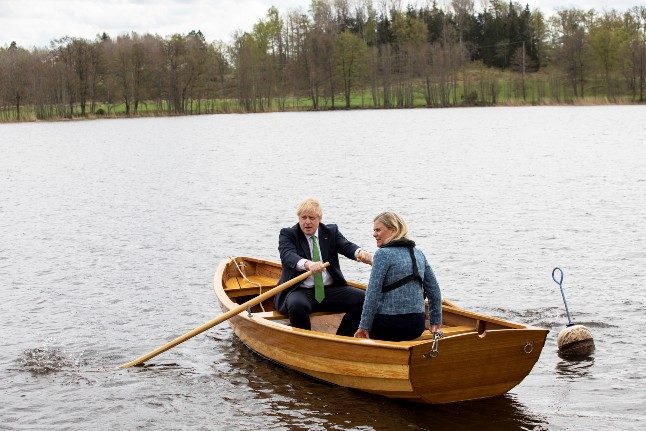 To what extent is the deal a mutual defence agreement similar to Nato’s Article 5?

The key lines in the “Political Declaration of Solidarity” are a commitment to mutual assistance in the event that either country is attacked.

“Should either country suffer a disaster or an attack, the United Kingdom and Sweden will, upon request from the affected country, assist each other in a variety of ways, which may include military means,” the text reads.

It stresses, however, that any “intensified cooperation” must remain “fully in line with each country’s security and defence policy”, and is “designed to complement not replace existing European and Euro-Atlantic cooperation”.

This indicates that the UK might require clearance from Nato before engaging militarily, and also makes clear that were Sweden not to join Nato, this deal would not function as an alternative.

Is it a mutually binding agreement?

No. The last line reads, somewhat dispiritingly, “this document is a political declaration and not a legally binding commitment under international law.”

So would Britain engage militarily if Sweden (or Finland) were attacked by Russia?

In the press conference, Boris Johnson went further than the actual agreement, saying that the UK would come to the assistance of Sweden with “whatever Sweden requested,” in the event of an attack.

The text is much more qualified. While the support “may include military means”, it does not say what factors or which government would get to decide whether it actually does, and “military means”, could include the sort of support currently given to Ukraine.

If Sweden and Finland decide to join Nato, will the UK send ships or jets to the Baltic?

The UK government’s press release says the UK will offer to deploy ships, jets or troops near Sweden and Finland as a result of the deal.

“As part of increased defence cooperation with Sweden and Finland, the Prime Minister will offer to increase deployments to the region, including with Royal Air Force, British Army and Royal Navy assets and personnel,” the press release reads.

But it doesn’t give any timing on this. Is this something which might happen between the two countries’ decisions to apply to join Nato (likely early next week) and their becoming members (this autumn)? ‘

This is what was suggested by an article in Aftonbladet this week, but it still remains unclear.

How much safer does it make Sweden?

Swedish PM Magdalena Andersson said at the press conference that the agreement bolstered Sweden’s security, whether or not it decided to join Nato.

“Are we more secure with this declaration? The answer is ‘yes’,” she said.

Malena Britz, a researcher at the Swedish Defence University, said that the deal essentially gave Sweden the same level of guarantees from the UK that it had before Brexit.

“You could say we are back to having the support from the Brits before they left the EU,” she said, saying the language was “pretty exactly what was agreed in the current EU treaties”.

“Of course,” Sanchez replied, when asked at the World Economic Forum in Davos, Switzerland, if the two nations would send delegations to the June 28-30 gathering.

“They are big democracies, very well established and consolidated democracies, and I think it is also very important for Nato and the European Union to have them on board as NATO allies,” he added.

Spain will speed up its parliamentary procedure to give its backing for the entry of the two nations in the alliance, the prime minister said.

Sweden and Finland applied to join the transatlantic alliance in the wake of Russia’s invasion of Ukraine on February 24.

But all 30 of Nato’s members must approve the enlargement, and Turkey has warned it will not support their applications as things stand.

Ankara has long accused Nordic countries — in particular Sweden, which has a strong Turkish immigrant community — of harbouring outlawed Kurdish militants as well as supporters of Fethullah Gülen, the US-based preacher it accuses of being behind a failed 2016 coup.

The two countries’ bids to join Nato constitutes one of the most significant changes in Europe’s security architecture in decades, not least because Finland shares a 1,300-kilometre (800-mile) border with Russia.