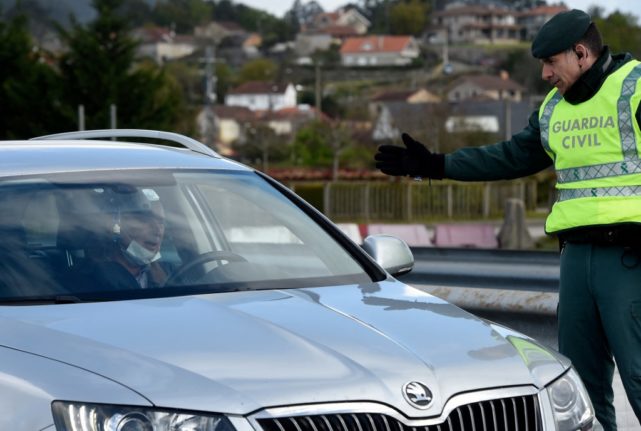 “Driving a vehicle without a valid licence is illegal in Spain,” the UK embassy in Madrid has told UK licence holders living in Spain who will not be able to drive from May 1st. (Photo by MIGUEL RIOPA / AFP)

“We’re not there just yet. And we will not have reached an agreement in time for the end of the current grace period (April 30th),” Elliott said in the Facebook video post regarding the fact that Spanish and British authorities have still not been able to reach a deal over the mutual exchange of licences.

“What does this mean for you? It means that if you have been resident in Spain for longer than six months, your UK-issued licence will no longer be valid to drive here from May 1st (2022).”

So British driving licence holders who have been living in Spain for more than six months and did not manage to complete the exchange process yet in time, cannot drive in Spain with their UK licences from Sunday May 1st 2022.

“We know this will cause significant difficulties for those who have not yet been able to exchange their licence,” Elliott regretted.

“I am relieved that most of you were able to exchange your licence as advised before the end of the transition period.”

There are no official stats on how many drivers will be affected by this, but with the latest British population stats in Spain pointing to 407,000 residents, it’s likely to be thousands.

“Driving a vehicle without a valid licence is illegal in Spain,” the UK Embassy stressed.

“If you are affected by this change and need to drive, you should not wait for the outcome of the negotiations and should take immediate steps to apply for a Spanish licence – as we have been advising for some time now.”

Spanish authorities have previously given UK driving licence holders four grace periods (of three or two months in length each), but there has been no further extension of UK licence validity granted this time.

So does this mean there is no deal and UK drivers residing in Spain will have to sit their driving exam again to get a Spanish licence?

It’s still unclear. According to the British ambassador, Spanish and British authorities have “agreed to rapidly accelerate talks next week in the hope of reaching an agreement soon as we already have in almost every other EU Member State”.

READ ALSO: Driving licences – How does situation for Britons in Spain compare to rest of Europe?

“You can be assured we are doing all we can to secure a long-term solution swifty,” Elliott concluded.

The UK Embassy in Madrid reminded viewers that this does not affect visiting motorists from the UK or Gibraltar or UK licence holders who have recently moved to Spain, or British tourists visiting Spain. You have six months from the date you get your residence document to take a Spanish test.

Unless Spain has a bilateral agreement with a third country for the recognition and exchange of licences, most non-EU driving licence holders have six months from their arrival in Spain to use their foreign licences (some need an international driving permit from the very beginning, not Brits).

After that, they usually have to sit theory and practical tests and get a Spanish licence from scratch.

READ ALSO: How much does it cost to get your driving licence in Spain?

According to the latest data available from Unespa, the Spanish Association of Insurers and Reinsurers, there are a total of 674,000 electric and hybrid cars circulating in Spain. However, the real figure is thought to be even higher.

Sales of hybrid and electric cars have risen significantly in the past year and sales soared to a record high in January 2022. In that month there were 19,845 electric, hybrid or gas car sales registered, compared to 16,579 petrol and 15,404 diesel vehicle purchases.

The sales of second-hand electric cars also grew by 113.4 percent in 2021 compared with the previous year, according to figures from Ideauto, Spain’s Institute of Automotive Studies.

Only 22 percent of Spanish car buyers say they would opt for a petrol or diesel car next time they purchase a vehicle, the European Investment Bank Survey reports, while 78 percent say they will either purchase a hybrid or an electric car.

The evidence suggests interest in electric vehicles is growing rapidly in Spain. Whether it’s as a result of drivers looking for a more environmentally friendly option of moving around or that they feel they should change their car to avoid increasingly punitive restrictions for combustion engine vehicles in the future, attitudes are changing.

So is it actually worth getting an electric car in Spain in 2022?

As you probably know already, electric cars cost more to buy than traditional petrol vehicles. On average, between €5,000 and €15,000 more.

The average price of an electric car in 2021 was €26,591, which was one percent higher than that of the previous year, according to the ElectricarVO report by car website coches.net.

However, the price of an electric car greatly depends on the region you buy it in. The most expensive region to buy a second-hand electric car last year was Navarre, where it would have cost you an average of €35,579, followed by the Canary Islands (€31,469) and Valencia (€29,073).

According to ElectricarVO, La Rioja is the cheapest region to buy a second-hand electric car at €22,382, followed by the Balearic Islands at €23,148 and then Andalusia at €24,329.

But remember, it’s not all about the initial cost of the car, you need to look at the overall expenses of the upkeep and the efficiency too.

To give you an idea, travelling 100 kilometres in an electric vehicle costs approximately 13 kWh, while a conventional car that consumes five litres per 100 km would need 45 kWh to do so.

There are also several subsidies, incentives and grants available in Spain for anyone wanting to purchase an electric car.

If you live in Valencia, La Rioja or Castilla y León, you can even claim the purchase of your electric car back on your annual tax return.

Other than incentives offered for purchasing electric vehicles, there are also considerable fuel savings, which can range between €700 and €1,200 for every 15,000 km travelled. Electric vehicle owners also qualify for up to 75 percent discount on yearly road tax.

Major cities such as Madrid and Barcelona also provide electric vehicle owners with further bonuses such as not having to pay for parking.

The upkeep of electric cars is a lot less than traditional cars.

You don’t have to pay for mechanical transmissions, oils or lubricants and repairs are minimal compared to what could go wrong with a petrol car.

Distance you can cover

Distance is one factor that may concern some people wanting to buy an electric car. It’s true that there are big differences between the mileage that electric vehicles can reach compared with traditional cars.

Fortunately in recent years this gap has been closing, with electric vehicles now potentially being able to reach 400km on a single battery charge.

This is another sticking point when it comes to deciding if an electric car is right for you or not.

In order to be able to install a charging point at your home, you need a grounded 230/400 VAC supply point, a main electrical control panel and a measuring device. However, if your garage is not located in the same place as your home, you will have to ask your distribution company for a new supply point.

Spanish law indicates that you must inform the community of owners of your building if you’re going to install a charging point, however they can’t prevent you from installing one as the electricity bill will be charged directly to you and they won’t have anything to do with it.

You may also want to research the number of charging points in your region and work out how many you may realistically need to access on your journeys.

The distribution of charging points is still uneven in Spain, with only four communities accounting for 60 percent of the points according to statistics published by the Spanish Association of Car and Truck Manufacturers (ANFAC).

With approximately 13,411 public access points, the goal set by the Spanish government of reaching 100,000 by 2023 seems unlikely to be reached.

Catalonia has the most charging points in Spain with 3,549, followed by Valencia with 1,661and Madrid with 1,601. La Rioja, Cantabria and Extremadura have the least.

However, Spanish energy company Iberdrola has pledged to install electric vehicle charging stations along all the main motorways in Spain, as well as in the public areas of main cities.

The plan will include at least one rapid recharge station every 50km.

So is it worth getting an electric car in Spain in 2022?

Spanish bank BBVA has a comparison tool which pits a mid-range fuel vehicle against an electric car. From a financial perspective, electric car buyers start to see a return on their investment on average four years after the initial purchase.

Other studies point to electric car buyers breaking even after 20,000km of use.

Further deductions and incentives may help to convince buyers, especially as soaring prices for raw materials mean electric car parts are not getting any cheaper currently.

Buying an electric car in Spain can be worth it in the long run but ultimately it depends on your personal circumstances, and you have to ask yourself questions such as: will you have a charging point close?, how much use will you give it?, will you need it in emergencies or for long journeys?, will it be your only vehicle?, and so on.