France's President Emmanuel Macron and EU leaders pose for a family photograph at the Palace of Versailles, near Paris, on March 10, 2022, ahead of the EU leaders summit. (Photo by Ludovic MARIN / AFP)

“Europe will be forged in crises and will be the sum of the solutions adopted for those crises,” said Jean Monnet, one of the founding fathers of the European Union.

That prediction has proven true time and again since the first six countries (France, Germany, Italy, Belgium, the Netherlands and Luxembourg) decided, in the aftermath of World War II, to pool together to make new conflicts among them impossible.

Other countries later joined the bloc, usually after economic or political shocks. The United Kingdom applied for membership (and was initially rejected twice) after the Suez crisis and the dismantling of the empire. Greece and Spain saw the EU accession, in the 1980s, as a way to complete the path to democracy after painful years of dictatorship. The fall of the Berlin Wall and the end of the Cold War paved the way for the access of Central and Eastern European states, which were previously part of the Soviet bloc.

Another bloody war, which ended with the break up of former Yugoslavia, led Albania, North Macedonia, Montenegro and Serbia to become candidate countries. Now Russia’s invasion of Ukraine has driven Ukraine, Georgia and Moldova to apply too.

As the EU expanded, its unity has been tested. The financial crisis of 2008 opened a rift between wealthier and poorer economies with Greece facing bankruptcy and almost falling out of the Eurozone. But at the price of harsh austerity measures, a precarious solidarity prevailed and the euro, the EU’s flagship monetary project, was saved.

It took the UK decision to leave the bloc, in 2016, to find common purpose again. In the negotiation with a departing member, EU countries saw the need to protect their common interests and recognised the cost of going alone.

A gigantic leap was then made at the outbreak of the pandemic. Facing a dramatic economic crisis, the leaders of the EU and the 27 member states spent four days and nights together to design a recovery plan worth 750 billion euros, the largest stimulus package ever conceived in Europe.

EU leaders attached the package to environmental and digital objectives to not only boost, but radically transform the economy. They also agree to partly finance the plan with common debt, another first and a further commitment to a united Europe.

Now the war in Ukraine is an “immense trauma… a human, political and humanitarian drama”, but also, “an element that will lead to completely redefine the architecture of Europe,” said French President Emmanuel Macron before the informal EU summit this week in Versailles.

EU leaders have cautiously opened the door to Ukraine’s EU accession. “We will further strengthen our bonds and deepen our partnership to support Ukraine in pursuing its European path. Ukraine belongs to our European family,” they said in a declaration. But they did not commit to make this easier or faster than previous enlargements.

In the past two weeks, however, the EU has already changed dramatically in at least three other ways.

The first is related to the decision to boost defence cooperation. EU leaders in Versailles agreed to “increase substantially defence expenditures… and with defence capabilities developed in a collaborative way within the European Union”.

Started as a peace project, the bloc is now actively reinforcing its military capacity and, at the end of February, made the unprecedented decision to use €500 million from the EU budget to fund the purchase and delivery and weapons for Ukraine, an amount later doubled in Versailles.

The EU Treaty contains a clause that obliges EU states to help “by all the means in their power” an EU country that suffers an armed aggression. So Germany’s shift was perhaps inevitable after the UK, the biggest military power in Europe with France, decided to leave the bloc.

Second, the way EU countries have welcomed people fleeing Ukraine marks a U-turn in the refugee policy. More than 2 million people have sought sanctuary in the EU in the past two weeks and, for a first time again, EU countries unanimously agreed to use a ‘temporary protection’ mechanism introduced in 2001 in the aftermath of the war in former Yugoslavia.

Ukrainian citizens can already travel to the EU visa-free. The emergency mechanism, however, grants them residence and working rights with reduced formalities and without the need to apply for asylum.

The EU has been accused of double standards for not having been able to make similar decisions for previous conflicts, such as Syria’s, but now that the system has been activated, it will be harder to backtrack in the future.

Third, the EU adopted a raft of massive sanctions against Russia, from the termination of technology transfer to limits to the import and export of some goods and sanctions against individuals with links to the Putin’s regime. It remains, however, dependent on Russia’s energy. Oil, coal and gas make up 62 percent of Russia’s exports to the bloc, according to the EU statistical office Eurostat.

Now the EU has agreed to reduce imports of Russian gas by two-thirds by the end of the year and is discussing a complete phase out of Russian fossil fuels by 2027.

In the short term, the EU aims to find alternative sources of gas. But in the longer term, the plan is to reduce demand through energy efficiency, including a massive building renovation programme, and a boost to renewable energy, accelerating plans to make the European economy carbon neutral by 2050.

If the EU manages to become more independent, greener and more humane, it may be true that the Ukraine conflict will represent, as EU leaders said, a “tectonic shift in European history”.

This article is published in cooperation with Europe Street News, a news outlet about citizens’ rights in the EU and the UK. 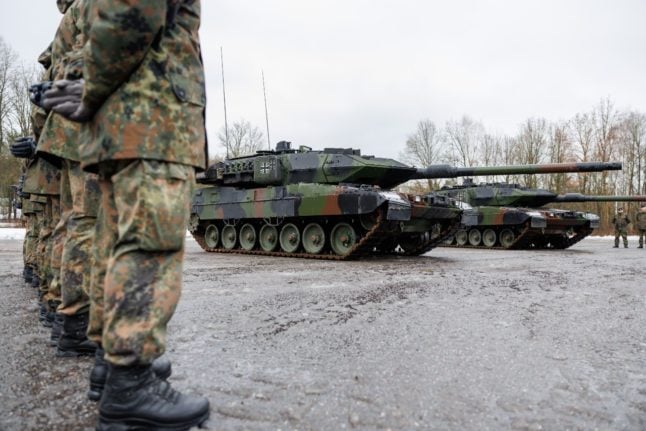 Berlin has already said it will provide Ukraine with 14 Leopard 2s from its military stocks, but manufacturers also want to send tanks they have in storage.

“I can confirm… that an export licence has been issued,” government spokesman Steffen Hebestreit told a regular press briefing when asked about Leopard 1s.

He declined to give further information, saying more details would likely emerge in the coming days and weeks.

First entering service in the 1960s, the Leopard 1 is the forerunner of the more advanced Leopard 2, which is widely used by armies across Europe.

German magazine Der Spiegel reported that it concerned 29 Leopard 1s, which were in storage at a military manufacturer.

The Süddeutsche Zeitung newspaper meanwhile reported that two manufacturers want to refurbish dozens of Leopard 1s to send them to Ukraine, although they have faced problems in procuring ammunition.

Under German law, Berlin has to approve the export of the tanks, even in cases when other countries who bought them want to re-export them.

While scores of nations have pledged military hardware for Ukraine in recent weeks, Kyiv has been clamouring for the more sophisticated Leopards, seen as key to punching through enemy lines.