Spain's Prime minister Pedro Sánchez, seen here talking with soldiers in Latvia during the ongoing conflict in Ukraine, has not yet commented on his participation in the documentary. (Photo by Toms Norde / AFP)

Titled La Moncloa, in reference to the Spanish equivalent of the White House or 10 Downing Street, the four-part docuseries is reportedly in the middle of shooting, with filmmakers following Sánchez and his team of staff as they carry out their daily routine in government.

According to the two production studios behind the project, Secuoya Studios and The Pool, the documentary will “show two facets, the institutional side and the human side”.

It reportedly won’t consist of “purely political or ideological arguments” but rather be “an observational story, which will focus on the more personal and everyday aspects” of life for those in the Spanish government.

A release date for the docuseries has not yet been announced, nor the streaming platform or TV channel on which it will air, but the producers have advanced that the narrative and visual proposal will transit between documentary and factual cinema.

Prime Minister Pedro Sánchez, who is currently focusing on the war in Ukraine, has not offered any comment on his participation in the project so far.

The documentary will be directed by Curro Sánchez Varela, the son of famed Spanish guitarist Paco de Lucía, who has extensive experience directing short films, commercials and music videos.

His 2015 documentary about his father – La Búsqueda – won him Spain’s Goya Award for Best Documentary.

“We’re living through strange times, so having the possibility of having such transparent, free and honest access into the day-to-day of the Presidency of Spain’s Government makes us appreciate more than ever the fact that we’re living in a democratic country, in which its citizens are guaranteed their freedoms,” Varela is quoted as saying by radio station Onda Cero. 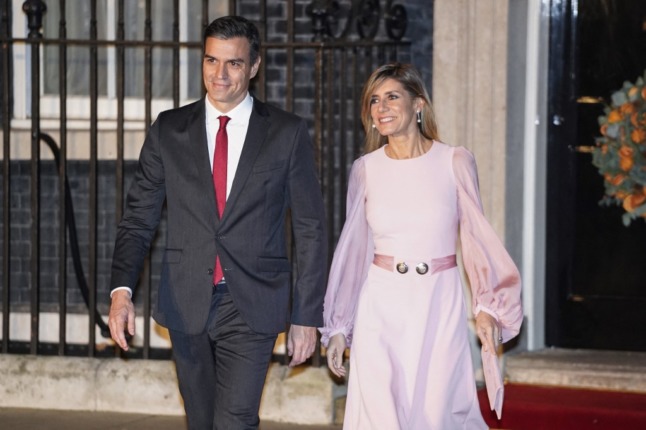 Sánchez and his wife María Begoña Gómez Fernández outside 10 Downing Street in London in 2019. (Photo by Niklas HALLE’N / AFP)

Even though Sánchez will be one of the main protagonists of the series, Varela says the project is also about “honouring and giving prestige to the team of workers who, in many cases, have been working for more than four decades at the service of different prime ministers in La Moncloa.

Sánchez, who was born in Madrid in 1952, is the head of Spain’s socialist PSOE party and has been Prime Minister since 2018. He is married and has two daughters.

Referred to as ‘Mr Handsome’ in the British and US press, Pedro Sánchez has won admirers around the world for his good looks, which may help the documentary series get some attention overseas.

Mali’s Foreign Minister Abdoulaye Diop wrote in a tweet that he had spoken by phone with his Spanish counterpart Jose Manuel Albares about the comments, which were made in a radio interview.

“He denied the remarks and expressed his attachment to friendly relations and cooperation with Mali,” wrote Diop.

Spain moved to calm the row Saturday, a day after a day the military regime in Bamako had summoned their ambassador for an explanation.

“Spain did not ask during the NATO summit or at any other time for an intervention, mission or any action by the Alliance in Mali,” said a statement from Spain’s embassy.

The row blew up over remarks by Albares in an interview Thursday with Spain’s RNE radio. Asked if a NATO mission in Mali could be ruled out, Albares said: “No, we can’t rule it out.”

“It hasn’t been on the table at the talks in Madrid because this is a summit that is laying out, so to speak, the framework for NATO action.”

“If it were necessary and if there was to be a threat to our security, of course it would be done,” he added.

Albares was speaking on the sidelines of the NATO summit as it drew to a close in Madrid. Diop had told state broadcaster ORTM on Friday that Bamako had summoned the Spanish ambassador to lodge a strong protest over the remarks.

“These remarks are unacceptable, unfriendly, serious,” said Diop, because “they tend to encourage an aggression against an independent and sovereign country”.

“We have asked for explanations, a clarification of this position from the Spanish government,” he added.

At the Madrid summit, Spain pushed hard to prioritise the topic of the threat to NATO’s southern flank caused by the unrest in the Sahel — the vast territory stretching across the south of Africa’s Sahara Desert, incorporating countries such as Burkina Faso, Chad, Mali, Mauritania and Niger.

Jihadist attacks there are pushing increasing numbers of people to flee north towards Europe, with Spain one of the main points of entry there.

At the summit, NATO acknowledged the alliance’s strategic interest in the Middle East, north Africa and the Sahel.

Mali has since 2012 been rocked by jihadist insurgencies. Violence began in the north and then spread to the centre and to neighbouring Burkina Faso and Niger.