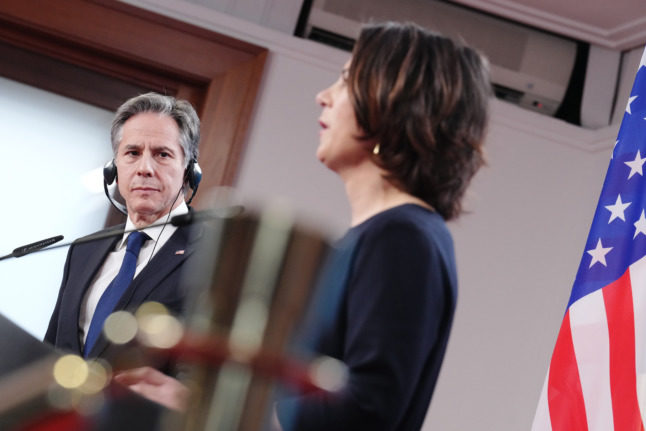 After a week of frantic diplomacy that included a visit to Berlin by US Secretary of State Antony Blinken, Chancellor Olaf Scholz’s government found itself scrambling at the weekend to reassure Kyiv of its support in the face of a feared Russian invasion.

The spat was triggered by German navy chief Kay-Achim Schönbach’s musings that it was “nonsense” to think Russia was about to march on Ukraine and that President Vladimir Putin deserves respect.

Schönbach resigned late Saturday, but the damage was done.

Scholz on Sunday warned again of “high costs” should Russia attack, in an interview with the Süddeutsche newspaper.

But with trademark caution, he also called for “wisdom” in considering sanctions and “the consequences they would have for us”.

Seeking to smoothe tensions, Blinken said he had “no doubts” that Germany shared Washington’s concerns and was maintaining a united front with NATO on Ukraine.

The Ukraine crisis is the first major test for Social Democrat Scholz, who took over from veteran leader Angela Merkel last month.

His coalition government of the centre-left SPD, the Greens and the pro-business FDP, has vowed “dialogue and toughness” with Russia.

But it has struggled to overcome internal divisions and craft a unified response on how to deal with an emboldened Moscow.

The Handelsblatt financial daily, noting that German politicians’ tendency to “understand Russia” remains alive and well, asked: “Where is the line between a willingness to engage in dialogue, and strategic naivete?”

A key bone of contention between Germany and Western allies is Berlin’s refusal to send weapons to Ukraine.

The United States, Britain and Baltic states have already agreed to send weapons, including anti-tank and anti-aircraft missiles.

Germany is traditionally reluctant to get involved in military conflict, traumatised by its past as an instigator of two World Wars, and Scholz’s government claims arming Ukraine would only inflame tensions.

Even in Germany, some have called for a rethink.

Henning Otte, a lawmaker from the centre-right CDU opposition party, told the Bild daily last week that if Ukraine is asking for weapons to fend off a possible attack, “we must not reject this request”.

Nord Stream 2 leverage
Another sore point in the Ukraine crisis is the contentious Nord Stream 2 pipeline, which has split the new cabinet in Berlin.
The completed pipeline, currently awaiting German regulatory approval, is set to double Russian gas supplies to Germany.
The previous Merkel-led government always insisted the pipeline was a purely commercial project — irritating allies who fear the pipeline will give Russia too much leverage over European energy.
While Scholz has echoed Merkel’s line on the “private sector project”, his Foreign Minister Annalena Baerbock, from the Greens, is a known opponent of Nord Stream 2. Part of the Nord Stream 2 pipeline in Mecklenburg Western-Pomerania. Photo: picture alliance/dpa | Stefan Sauer
But in a sign that Scholz’s position may be hardening, he reiterated last week that he stood by a German-US deal not to allow Moscow to use the pipeline as a weapon and that when it comes to sanctions, “everything” is on the table.
Jana Puglierin of the European Council on Foreign Relations think-tank, said she hoped Scholz’s words would bring “more coherence to the German debate and reassure partners abroad who had started to see Germany as the West’s weak link”.
‘Correct course’
Scholz’s SPD has a “nostalgic reflex” when it comes to Russia, Die Zeit weekly recently noted, harking back to ex-SPD chancellor Willy Brandt and his “Ostpolitik” policy of rapprochement with the east in the 1970s.
In an open letter in Die Zeit earlier this month, 73 Eastern Europe and security experts urged Berlin to end its “special treatment” of Russia and correct course.
Germany has been watching the Kremlin’s actions “critically but largely inactively for three decades”, they wrote. Now, “Germany must act”.
By Michelle Fitzpatrick

Rosneft said that Schröder and Nord Stream 2 CEO Matthias Warnig informed the company that it was “impossible to extend their powers on the board of directors” a day after Germany stripped Schröder of official perks over ties with Russia.

Rosneft praised their “strategic vision” and “significant contribution to the international business of the company”.

“Their role in the implementation of large-scale infrastructure projects in Russia and Germany, aimed at increasing the efficiency of the Germany economy and its industry and the well-being of its citizens, is invaluable,” Rosneft added.

Schröder, who was Germany’s leader from 1998 to 2005, had been slammed for refusing to quit his posts with Russian energy giants Rosneft and Gazprom following Russia’s war in Ukraine.

The German Bundestag’s decision to strip Schröder of an office and paid staff on Thursday came after a long effort to get him to turn his back on President Vladimir Putin.

“The coalition parliamentary groups have drawn consequences from the behaviour of former chancellor and lobbyist Gerhard Schröder in view of the Russian invasion of Ukraine,” the parliament decided.

“The office of the former chancellor shall be suspended,” it said, noting that Schröder “no longer upholds the continuing obligations of his office”.

The cost of Schröder’s office and employees was estimated to cost taxpayers around €400,000 per year.

EU lawmakers separately called in a non-binding resolution on the bloc to slap sanctions on Schröder and other Europeans who refuse to give up lucrative board seats at Russian companies.

Schröder, 78, is due to join the supervisory board of gas giant Gazprom in June.