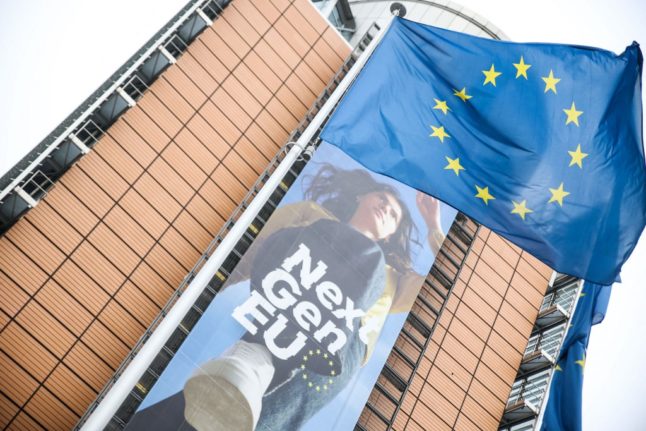 A banner publicising the 'Next Generation EU' campaign and with an EU flag fluttering near by at the European Commission headquarters, in Brussels on October 13, 2021. (Photo by Aris Oikonomou / AFP)

Being physically present in the EU for a few days in a 12-month period is enough to avoid losing permanent residency, EU judges said.

And once long-term residence is acquired, “it is not necessary for the person concerned to have his or her habitual residence or centre of interests in the European Union,” the Court has specified.

Under the EU directive entered into force in 2006, non-EU citizens can apply for long-term resident status once they have lived legally in a country of the European Union for an uninterrupted period of five years.

To get the status, they need to have a stable source of income and meet their own needs and those of their family members without relying on social assistance. They also need to have health insurance and, if required at the national level, prove they are integrated in society, for instance by knowing the language or the fundamental principles of the country.

Once acquired, long-term residence grants rights similar to EU citizens in terms or work, education, social security and other welfare benefits. In addition, it should make it easier to move for work or study to other EU countries, although there are still many gaps in the way the directive is applied at the national level.

The status can also be lost if the person concerned is absent from the EU for 12 consecutive months (EU countries can allow longer periods or consider exceptional circumstances).

But what counts as presence to break the 12-month period and maintain the status? The initial directive did not specify it and only on Thursday the EU Court of Justice provided a clarification.

Why was the clarification needed?

The case was related to a Kazakh citizen living in Austria. The head of government of the Vienna Province (Landeshauptmann von Wien) had refused his application to renew the long-term residence permit because, in the previous 5 years, he had been present in the EU territory for only a few days a year.

He then challenged the decision with the local administrative court (Verwaltungsgericht), requesting an interpretation of the rules to the Court of Justice of the EU.

The administrative court asked the EU Court to clarify whether any physical presence, even of a few days, would be sufficient to prevent the loss of status, or whether an EU member state could set additional conditions, such as having habitual residence or a centre of interests in the country.

And what was the ruling?

The EU Court of Justice ruled this week that “to prevent the loss of long-term resident status” it is sufficient to be present in the EU for a few days in the 12 months following the start of the absence.

This interpretation of the directive will now have to be followed by national administrations and courts EU-wide (except in Denmark and Ireland, which have opted out from this directive. It is possible for EU countries to opt out from EU directives on justice and home affairs but not on the internal market.)

The EU judges noted that the directive “seeks to ensure the integration of third-country nationals” and since they have already “demonstrated that they are settled in that member state”, they are, in principle, “free, as are EU citizens, to travel and reside, also for longer periods, outside the territory of the European Union” without losing their status. The rule applies as long as they maintain a link with the EU, which means they are not absent for more than 12 consecutive months, the Court added.

Steve Peers, professor of EU law, human rights law and world trade law at the University of Essex, in England, said “this is the first judgment on this aspect of the loss of status due to absence.”

Professor Peers also explained that when a person loses EU long-term residency status, it is still possible to maintain national status, “either where they hold that status in parallel and there are not sufficient grounds to remove it, or where they are allowed to stay under national law even though they have lost the EU status.”

Of the 23 million non-EU citizens living in the European Union, more than 10 million had long-term residence in 2019, according to the EU statistical office Eurostat.

“These residents are close to acquiring citizenship in the countries where they reside” and “they have got rights to education and vocational training, social security, tax benefits and access to procedures for obtaining housing,” said Maria Luisa Castro Costaluz of Costaluz Lawyers, a law firm in Algeciras specialized in the rights of English-speaking foreigners in Spain.

“It seems sensible that the long-term status provides to them a better profile in regards to mobility too,” she commented.

And what about for Britons covered by Withdrawal Agreement?

According to legal experts, the Court’s decision would also extend to people covered by the agreement on the UK withdrawal from the European Union.

While the period of absences accepted for long-term residents is up to 12 months, however, under the Brexit agreement it is up to 5 years for those covered by the Withdrawal Agreement.

“If the judgment applies by analogy, then it should follow that it should be adapted to the period of absence. So a few days in every five years,” Professor Peers said. But then he added: “Of course no one should act on this assumption until the EU court has confirmed it.”

The article is published in cooperation with Europe Street News, a news outlet about citizens’ rights in the EU and the UK. 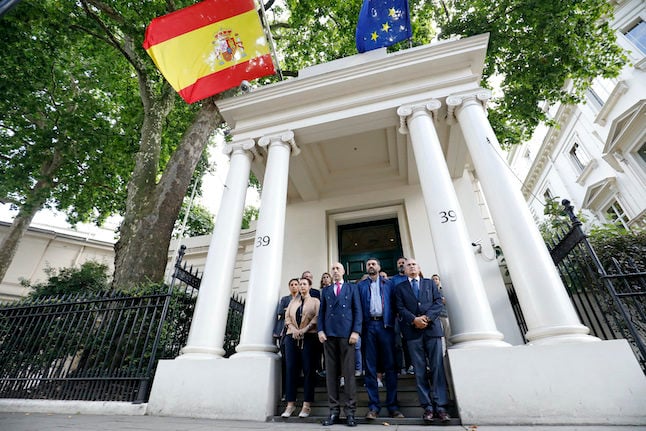 If there ever was a clear indication that Spanish salaries and work conditions are not in line with that of their European counterparts, this may be it.

It all began on March 14th 2022, when workers at the Spanish Embassy in London called an indefinite strike.

They demand and continue to demand a salary update after thirteen years of reported wage freezes, equal pay for all workers in the same administrative category, and the option of contributing to Spain’s social security system rather than the UK’s.

The manifesto by Spain’s consular staff explaining the reasons for the strike, under the headline “Abandoned”.

The salaries of Spain’s consular staff in the UK range between €20,000 and €26,000 per year, not enough to cover London’s sky-high living costs, employees rightfully claim.

These demands and strike actions were replicated at consulates in Manchester and Edinburgh later on in March, and although the huelgas (strikes) in the United Kingdom have been reduced to a couple of hours a day after strike organisers PLEX (Labour Personnel of the Foreign Service) reached some consensus with Madrid, the problems aren’t completely resolved yet.

In fact, anger against Spain’s Foreign Affairs Ministry (Ministerio de Exteriores) appears to be boiling over around the world.

Protests in the UK have now incited strikes among Spanish embassy staff in other countries including France, Belgium, Germany, Italy, the Netherlands, Ireland and Australia.

Staff based in China are also showing their support by sending letters to their superiors with similar demands.

In Israel, Spanish consular workers are protesting outside their embassy during their lunch breaks, and throughout Latin America embassy staff are getting ready to carry out their own strikes.

As is the case with staff in the UK, they are challenging their low pay and wage freezes, which they claim often don’t meet the minimum wage in the country they’re living in.

According to union representatives, all staff abroad have had their salaries “frozen since 2009, despite inflation and greater pressure on the workforce, which is creating an increasingly tense environment”.

In France at the consulate in Lyon, worker Marta Navarro has said that they “earn below the French minimum interprofessional salary and that the only way the consulate is managing to function is due to internship staff” who can be paid less.

While in Germany, Spanish embassy staff are protesting the loss of purchasing power after 13 years of salary freezing, for which they demand a salary increase. The salary of a consular official at the Berlin consulate is around €36,732 per year.

In Brussels, employees say that although in 2019 there was a 3.2 percent increase in wages in most European Union countries, it did not make up for the loss of purchasing power. They argue that in the last nine months there have been four wage increases in Belgium and they have not received any of them.

And down under in Australia, Marcos Redondo, an official of the Spanish Consulate in Sydney has told the Spanish press that “in 2017 they were on strike for 35 working days.” But after almost a month and a half, the workers could not sustain the strike, as they could not afford the loss of wages. Since then, they have sent several letters addressed to the Australian ambassador to Spain saying that Sydney workers “are again below the legal minimum wage for the fifth consecutive year”.

Although the main demand of Exteriores‘ workforce abroad is a wage increase, they also want a labour agreement, which will regulate their working conditions. Those in the UK also want to be able to contribute to Spain’s social security system rather than the UK’s, which since Brexit offers higher benefits than the British system.

Spain’s embassies and consulates abroad are responsible for issuing Spanish passports, offering assistance to Spanish nationals and processing visas for foreigners who want to move to Spain, among other responsibilities.

There have been reports that hundreds of Spaniards residing in the UK are trapped in the country as a result of their passports expiring and not  being able to get an appointment to renew their documents at the Spanish embassy or consulates for months, even before the strikes began in March.

This showcases how deep rooted the problems are at Spain’s embassies and consulates in the UK. In 2021, Spain went for six months without having an Ambassador in the United Kingdom and there have been ongoing complaints for the past years about long queues, poor service and lengthy processing times, all of which have worsened as a result of Covid-19 and Brexit.

Spanish embassy and consular workers by contrast argue that they are not only underpaid, they are understaffed.

From a foreigner’s perspective, the recent strikes in the UK have meant that anyone trying to apply for Spain’s Non-Lucrative Visa, Golden Visa, work visas or student visas has had to wait longer than they had originally planned for appointments and processing, causing some documentation to expire and affecting their relocation goals.

This backlog of applications is now slowly but surely addressed in the United Kingdom, but new strikes and protests by consular staff around the world are likely to result in a similar limbo for many other applicants who have to deal with Spanish embassies or consulates.