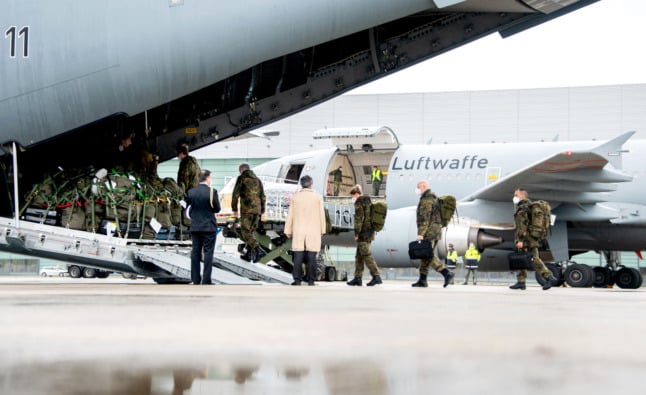 Medical staff of the German armed forces Bundeswehr embark a military transport plane at the military airport in Wunstorf near Hanover on February 3, 2021, as the aircraft is being prepared to leave for a coronavirus aid mission to Portugal. Photo: Hauke-Christian Dittrich/AFP

Berlin has already delivered respirators to Ukraine and severely injured Ukrainian soldiers are currently being treated in Bundeswehr hospitals, the minister told Welt am Sonntag newspaper.

“In February, a complete field hospital will be handed over, including the necessary training, all co-financed by Germany with 5.3 million euros ($6.0 million),” Lambrecht said.

“We are standing on Kiev’s side. We must do everything to de-escalate the situation.

“Weapons deliveries would not be helpful at the moment — that is the consensus within the government,” she added.

Russia has massed tens of thousands of troops on the Ukrainian border, denying it plans to invade but demanding security guarantees, including a permanent ban on the country joining NATO.

Echoeing Western allies, Lambrecht said Moscow’s demand to decide which state joins NATO was a “red line” for the alliance.

“There is no Russian veto-right for membership to NATO. Every sovereign nation that shares our values is free to apply for membership. But beyond this red line, there is readiness from the West to speak with Russia and to take its interests into account,” she said.

Turning to Mali, another theatre of conflict involving Russia, Lambrecht said Moscow will not achieve its aims simply by deploying mercenaries to the West African countries.

Mali is the epicentre of a jihadist insurgency that began in the north of the country in 2012 and spread three years later to neighbouring Niger and Burkina Faso.

Germany has around a thousand troops stationed in Mali as part of the United Nations’ MINUSMA mission.

The West believes that several hundred Russian mercenaries from the Wagner group had been deployed in the centre and north of the country.

“Moscow will not succeed in getting the West to carry out a quasi retreat automatically wherever it doesn’t want to see us by sending mercenaries,” said Lambrecht.

“We will not give way, we will not make it that easy for the Russians.”

The Wagner Group has caused controversy through its involvement in Syria, Libya, the Central African Republic as well as the conflict in eastern Ukraine.

Russia denies any government link with the Wagner Group but the unit has been linked to Yevgeny Prigozhin, a businessman close to President Vladimir Putin.

Rosneft said that Schröder and Nord Stream 2 CEO Matthias Warnig informed the company that it was “impossible to extend their powers on the board of directors” a day after Germany stripped Schröder of official perks over ties with Russia.

Rosneft praised their “strategic vision” and “significant contribution to the international business of the company”.

“Their role in the implementation of large-scale infrastructure projects in Russia and Germany, aimed at increasing the efficiency of the Germany economy and its industry and the well-being of its citizens, is invaluable,” Rosneft added.

Schröder, who was Germany’s leader from 1998 to 2005, had been slammed for refusing to quit his posts with Russian energy giants Rosneft and Gazprom following Russia’s war in Ukraine.

The German Bundestag’s decision to strip Schröder of an office and paid staff on Thursday came after a long effort to get him to turn his back on President Vladimir Putin.

“The coalition parliamentary groups have drawn consequences from the behaviour of former chancellor and lobbyist Gerhard Schröder in view of the Russian invasion of Ukraine,” the parliament decided.

“The office of the former chancellor shall be suspended,” it said, noting that Schröder “no longer upholds the continuing obligations of his office”.

The cost of Schröder’s office and employees was estimated to cost taxpayers around €400,000 per year.

EU lawmakers separately called in a non-binding resolution on the bloc to slap sanctions on Schröder and other Europeans who refuse to give up lucrative board seats at Russian companies.

Schröder, 78, is due to join the supervisory board of gas giant Gazprom in June.