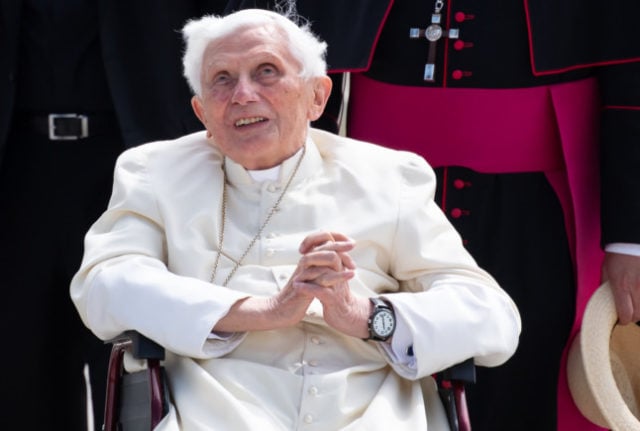 Benedict — who was the archbishop of Munich and Freising from 1977 to 1982 — has “strictly” denied any responsibility, said lawyer Martin Pusch of Westpfahl Spilker Wastl (WSW), which was commissioned by the church to carry out the probe.

But the experts do not consider this credible, Pusch said.

Benedict, 94 — whose civilian name is Josef Ratzinger — in 2013 became the first pope to step down from the role in 600 years and now lives a secluded life in a former convent inside the grounds of the Vatican.

Vatican spokesman Matteo Bruni emphasised that it must still examine the report, “the contents of which are not currently known”, but reiterated the Vatican’s “sense of shame and remorse for the abuse of minors committed by clerics”.

Two of the cases where Benedict allegedly failed to act involved clergymen who had committed several proven acts of abuse but were allowed to continue with pastoral duties, Pusch said.

An interest in the abuse victims was “not recognisable” in Benedict, he said.

In one case, a now notorious paedophile priest named Peter Hullermann was transferred to Munich from Essen in western Germany where he had been accused of abusing an 11-year-old boy.

Hullermann was reassigned to pastoral duties despite his history and continued to reoffend for many years.

Pusch said Benedict had initially shown a “defensive attitude” when responding to questions for the investigation. However, he later changed his attitude and gave a detailed written statement.

The Munich report, which examined the years 1945 to 2019, found indications of sexually abusive behaviour in 235 people it investigated, including 173 priests.

The lawyers also accused Cardinal Reinhard Marx, the current archbishop of Munich and Freising, of failing to act in two cases of suspected abuse.

Marx had last year offered Pope Francis his resignation over the church’s “institutional and systemic failure” in its handling of child sex abuse scandals.

However, Pope Francis rejected his offer, urging the cardinal known for his reforms to stay and help shape change in the Catholic Church.

The reformist Catholic group “Wir sind Kirche” (We are Church) said the report offered “frightening insights into the lack of sense of responsibility of clerical office holders”.

It called on Benedict to “face up to his ecclesiastical and moral responsibility instead of making more and more denials that are not very credible”.

The Catholic Church has been embroiled in a series of sexual abuse scandals in countries around the world, including Australia, Chile, France, Ireland and the United States.

In Germany, a string of reports in recent years have exposed widespread abuse of children by clergymen.

A study commissioned by the German Bishops’ Conference in 2018 concluded that 1,670 clergymen in the country had committed some form of sexual attack against 3,677 minors between 1946 and 2014.

However, the real number of victims is thought to be much higher.

Another report published last year exposed the scope of abuse committed by priests in Germany’s top diocese of Cologne.

The abuse scandal has thwarted the Catholic Church’s efforts to spearhead broad reforms in Germany.

It counted 22.2 million members in 2020 and is still the largest religion in the country, but the number is 2.5 million fewer than in 2010 when the first major wave of paedophile abuse cases came to light.

It was “impressive and very moving” to see the lawyers “take apart this edifice of lies that has been erected to protect Benedict XVI”, he said.

By Ralf ISERMANN with Femke COLBORNE in Berlin

The incident happened at the Lloyd Gymnasium school in the centre of Bremerhaven, a city on Germany’s North Sea coast, on Thursday morning.

“The armed person has been arrested and is in police custody,” police said in a statement. The injured woman was not a pupil, police said.

They said the suspect had entered the school building and fired at a female member of staff, who was “seriously injured”.

The alarm was quickly raised and police said they detained the suspect at a nearby location soon after and had seized his weapon at the scene.

The injured woman is being treated in hospital.

A video circulating on social media and German news sites appeared to capture the moment the gunman was arrested.

A man dressed in black is seen lying face down on a street corner, with a weapon next to him, before being handcuffed by officers.

But there was no immediate confirmation of reports the alleged weapon was a crossbow.

Bremerhaven police tweeted in the morning that a large deployment was under way in the city centre and asked residents to avoid the Mayor-Martin-Donandt square and surrounding streets, in the vicinity of the Lloyd secondary school.

Local news site Nord24 said a school pupil had heard shots being fired and called the police. Pupils barricaded themselves in their classrooms.

Police launched a large-scale operation and cordoned off the area around the school while they carried out inquiries.

By mid-afternoon, police said special forces had completed their search and the last people had left the building.

Authorities set up a phone hotline for concerned parents. Many parents had gathered in front of the school after being alerted by their children.

Local media said only around 200 people were on the school grounds, fewer than normal because of exam times.

In a separate incident on Thursday, police in the eastern city of Leipzig said they had detained a 21-year-old student still at secondary school after being tipped off by Snapchat that he had posted pictures of himself with a gun and made unspecified threats.

A police spokesman said that the 21-year-old did not pose a real threat, however, and only possessed an airsoft gun, a replica firearm that uses non-lethal, usually plastic, pellets.

School shootings are relatively rare in Germany, a country with some of the strictest gun laws in Europe. But a recent spate has rattled the population.

Last week, investigators in Germany’s city of Essen said they foiled a school bomb assault, as they arrested a 16-year-old who is suspected to have been planning a “Nazi terror attack”.

Police in Essen stormed the teen’s room overnight, taking him into custody and uncovering 16 “pipe bombs”, as well as anti-Semitic and anti-Muslim material.

In January, an 18-year-old student opened fire in a lecture hall at Heidelberg University in southwestern Germany, killing a young woman and
injuring three others before fleeing the scene and turning the weapon on himself.

In 2009, a former pupil killed nine students, three teachers and three passers-by in a school shooting at Winnenden, in the German state of Baden-Württemberg. The gunman then killed himself.

In 2002, a 19-year-old former student, apparently in revenge for having been expelled, shot dead 16 people including 12 teachers and two students at a school in the central German city of Erfurt. He too then killed himself.

The Winnenden and Erfurt massacres were carried out with legal weapons and spurred Germany to tighten gun laws.

The country currently requires anyone under 25 to pass a psychiatric exam before applying for a gun licence.