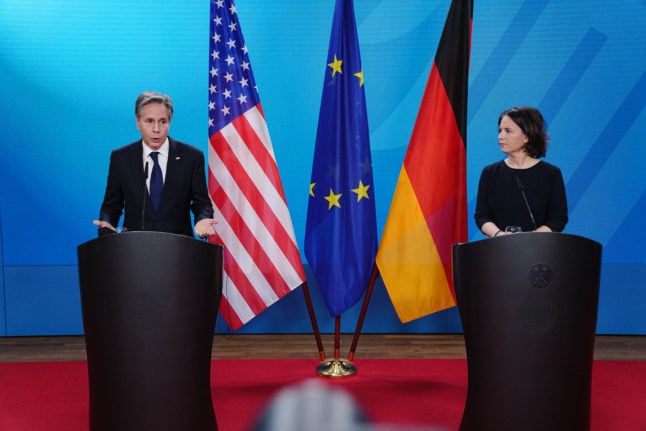 In a phone call on Thursday evening, the two leaders agreed that “further military aggression by Russia against Ukraine must be averted”, the German chancellery said in a statement.

Downing Street said Scholz and Johnson had “shared their deep concern at the ongoing destabilising action by Russia in Ukraine, and said any invasion into Ukraine would be a severe strategic mistake”.

“The prime minister stressed the importance of NATO allies working together on a coordinated response,” it said in a statement.

Fears are mounting that a major conflict could break out in Europe as tens of thousands of Russian troops mass on Ukraine’s border, along with an arsenal of tanks, fighting vehicles, artillery and missiles.

In a bid to defuse the worst tensions between Russia and the West in decades, US Secretary of State Antony Blinken is on a whirlwind diplomatic tour that took him to Berlin on Thursday before a meeting with Russian Foreign Minister Sergei Lavrov in Geneva on Friday.

“To allow Russia to violate those principles with impunity would drag us all back to a much more dangerous and unstable time, when this continent, and this city, were divided in two… with the threat of all-out war hanging over everyone’s heads,” he said.

The United States and its allies have warned Moscow of grave consequences if “any” of the troops massed on the border were to cross the border into Ukraine.

Baerbock added that the Western allies would not shy away from taking action, even if that included measures that “could have economic consequences for ourselves”.

The recently completed — but not yet certified — Nord Stream 2 pipeline, which is due to double Russian gas supplies to Germany, has long been seen as a possible bargaining chip in the crisis.

Although Germany has previously insisted the pipeline was merely a commercial project and should not be halted for political reasons, Chancellor Olaf Scholz recently said “everything” was on the table.

Moscow insists it has no plans to invade Ukraine but has at the same time laid down a series of security demands — including a ban on Ukraine joining NATO — in exchange for de-escalation.

In London, British Prime Minister Boris Johnson said any Russian incursion into Ukraine “would be a disaster for the world”.

According to reports by DPA, German authorities have stepped in to remove bureaucratic hurdles for Russian visa applications amid a spike in migration since the war.

Under the new conditions, Russian workers who who earn at least €43,992 a year and who want to transfer to Germany with their current employer will be granted “global access to the labour market”.

This special status means they can be automatically granted a long-term visa rather than applying for one through Germany’s Federal Employment Agency. The scheme will provisionally run until September but can be extended if necessary.

Along with the fast-track visas, German authorities have also taken steps to make the application process easier for Russians who could face difficulties in getting appointments or providing documents.

According to media reports, embassies are now accepting documents submitted via email rather than requesting original copies by post. This is because no postal services are currently running between Germany and Russia.

In addition, embassies are offering group visa appointments for multiple employees within the same company, since many firms are deciding to transfer whole departments to Germany in the wake of the war.

EU visas have been in the spotlight recently as the Commission is examining whether their “golden passport” schemes for wealthy individuals have allowed Russian oligarchs to launder their ill-gotten gains.

However, there’s also been speculation that the bloc will offer easier routes for skilled Russians to emigrate as a means of worsening the country’s brain drain and benefiting from the skills of well-qualified Russian immigrants.

Since the beginning of Russia’s attack on Ukraine, hundreds of skilled workers from Russia have decided to move to Germany – the vast majority of whom already work for a German company.

Russian employees of international companies have been particularly hard hit by the sanctions, with many facing an uncertain professional future after the invasion.

“In April, around 350 visas for the purpose of gainful employment were issued to Russian nationals in Moscow,” the Foreign Office has stated.

German immigration attorneys have also reported a spike in the number of visa application cases they have supported Russians with in recent months.

“We have assisted with more than 400 applications for work visas from Russian citizens who want to come to Germany in the weeks since the war began,” said Katharina Vorländer, a lawyer at Fragomen Global LLP in Frankfurt am Main, a law firm specialising in labour migration.

According to Vorländer, around 30 percent of these applicants have already made it to Germany. This was only possible due to the support of the German authorities, she said.

Since Russia’s invasion of Ukraine, Germany has taken in around 600,000 Ukrainian refugees. People who were living in Ukraine at the date of Russia’s invasion on February 24th are currently entitled to live and work anywhere in the EU without a visa.