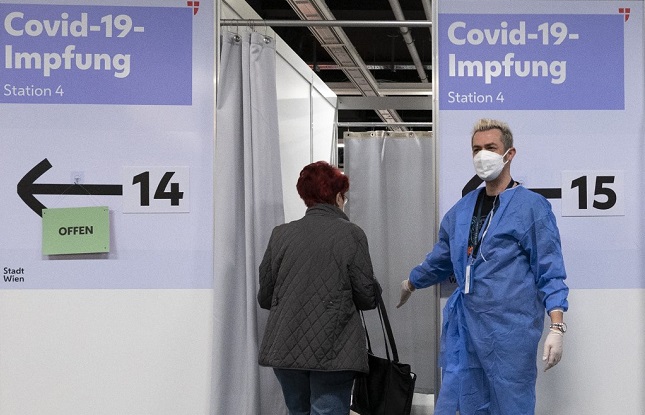 Austria becomes the first country in the EU to issue a general vaccine mandate, though several others have taken steps in the same direction. Photo: Joe Klamar/AFP

The overwhelming majority of MPs from all parties voted in favour of the law, with the leaders of the opposition Social Democrats (SPÖ) and the liberal NEOS lending their backing to the centre right-green coalition.

The only significant opposition came from the far-right Freedom Party (FPÖ), which has courted anti-vaccination voters.

The law had already been approved by the parliamentary healthcare committee on Monday. It will now come into effect from February 1st.

Some 75 percent of the Austrian population have had at least one Covid-19 vaccine and 72 percent are fully vaccinated, in line with the European average of a full vaccination rate of 70 percent but below several neighbours including France and Italy.

It’s taken a raft of incentives, campaigns, and increasing restrictions on the unvaccinated to reach this level.

The government initially wanted everyone aged 14 and older to be required to get the vaccine , but now the measure only applies to adults, except pregnant women and those with a medical exemption.

“Vaccination is an opportunity for our society to achieve lasting and continuous freedom, because the virus cannot restrict us any further,” Chancellor Karl Nehammer told reporters on Thursday ahead of the parliament debate. He acknowledged that the mandate was a “very intensively discussed, a very passionately discussed topic”.

FPÖ leader Herbert Kickl railed against the law in Thursday’s charged parliamentary debate, claiming it “paves the way to totalitarianism in Austria”.

He vowed that he himself would continue to refuse vaccination in defiance of the new law.

Green Health Minister Wolfgang Mückstein appealed during the debate on “all citizens to question myths around vaccination”, insisting that “all the evidence indicates that the vaccines available in Austria are safe”.

The first fines won’t be issued until mid-March, following an initial focus on informing people about both the new law and the protective effect of the vaccines. Even after March, it will be possible to avoid the fine by getting the Covid-19 vaccine within two weeks.

Austria will become the first place in Europe except the Vatican City to introduce such a mandate, though other countries have moved in a similar direction. Greece has begun issuing fines to unvaccinated over-60s, Italy has made the jab mandatory for everyone over 50, while a full vaccine mandate for the general population has also been discussed by politicians in Slovakia and Germany for example.

Austria still has a lockdown in place for anyone who has neither proof of full vaccination nor a recovery from Covid within the last 180 days.

Protests took place in central Vienna during the day on Thursday, but there is a ban on holding protests within 300 metres during a meeting of the National Council which means police have refused permits to several demonstration organisers.

Some Austrians remain to be convinced of the merits of the vaccination, with a couple of hundred opponents of the law gathering for a noisy protest near parliament on Thursday morning.

Teacher Kerstin said she felt the law ran against the constitution and ignored the fact that “we are meant to have certain basic rights”.

Other present maintained that not enough studies have been done into the long-term effects of the jabs and that they would resist paying any potential fines.

Austria’s Federal Government has a ticking time bomb on its hands: an ordinance that suspended its vaccine mandate law is set to expire by the end of May, which means that the controversial mandatory vaccination would be again in place as early as June 1st.

In order to keep that from happening, Austria’s Health Ministry needs to extend the current regulation or create a new one.

If it doesn’t, the Covid-19 mandatory vaccination law would automatically be back in June.

READ ALSO: EXPLAINED: What are Austria’s plans to bring back the vaccine mandate?

Since, by June, the vaccine mandate stated that non-vaccinated would start getting fines, the resumption of the law would mean that, from next month, those who are not vaccinated could be fined in routine checks, such as traffic checks.

The ins and outs of the vaccine mandate

The law was first introduced in February, even though the technical requirements for it to be enacted were not in place. The first stage of it was purely “informational”, and Austrian residents received letters explaining about vaccines and about the regulation.

A second stage, when people could have been fined if they were not vaccinated, was set to start in mid-March. Before a single person was fined, though, Health Minister Johannes Rauch (Greens) suspended the law with an ordinance.

The law was suspended for a variety of reasons, primarily due to the relatively high vaccination coverage the country had already received, along with the lower virulence of the Omicron variant.

To create a new regulation or extend the existing one stopping people from being fined, Rauch must await the report of the vaccination commission, which should be ready in May, according to the Ministry.

The coronavirus commission will assess whether the Vaccination Act is suitable and useful from a medical and legal point of view. A previous report said there were arguments for and against mandatory vaccination for those who were completely unvaccinated.

Der Standard reports there is little political support for compulsory vaccination and says there are still technical problems regarding automated fines. However, according to the Ministry of Health, the infrastructure should be completed in June.