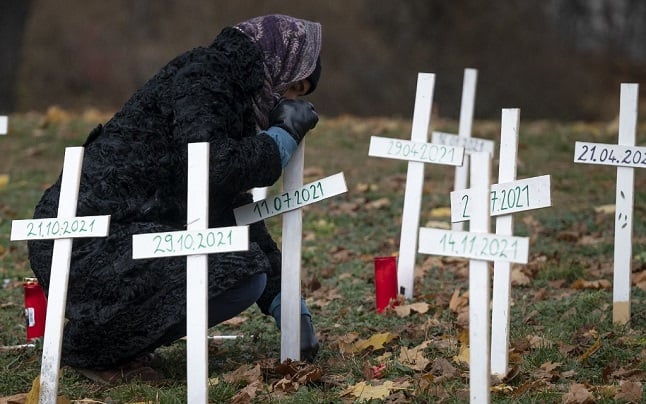 A woman by a symbolic cross in memory of the women killed by men in Austria in 2021. Photo: Andrea Klamar-Hutkova/AFP

Painted in blood red on an improvised memorial in Vienna, the number 31 is a stark reminder of a grim toll: the women killed by men in Austria last year.

After several particularly horrific cases among the killings were widely reported in the media, the issue of femicide is now squarely under the spotlight.

Figures have fluctuated over the years, but between 2010 and 2020, 319 women were killed in Austria, mostly by their male partners or ex-partners, with a record high of 43 victims in 2019, according to a study commissioned by
the government last year.

In 2018, Austria was among the three European Union members to report the highest rates of femicide where the perpetrator was a family member or relative, Eurostat data showed.

However, activist Ana Badhofer still decries a “lack of outrage” over femicide, saying her group instigated the memorial at a Vienna market out of frustration. She cited an example from November of a woman beaten to death with a baseball bat. It was a particularly shocking case last March that forced the issue to the forefront.

A 35-year-old woman, identified only as Nadine W., was beaten and strangled with a cable in a Vienna tobacco store by her 47-year-old ex-partner. He then poured gasoline on her and set her alight before leaving the shop and locking the door. She was rescued but died a month later from her horrific injuries.

In April, the 43-year-old owner of a craft beer store — previously accused by a politician of harassing her with obscene messages — was arrested for killing his former partner, a 35-year-old mother of two.

Both men were given life sentences and sent to institutions for mentally disturbed offenders.

From France to Mexico, South Africa to Turkey, campaigners have sounded the alarm about femicide and violence against women, often through massive rallies. In Austria, the coalition government recently allocated 25 million euros
($28 million) this year, among several initiatives towards fighting the problem.

The killings have prompted some soul-searching in the Alpine country, where more women than men are killed, according to Eurostat figures, making it an outlier in the EU.

Rösslhumer pointed to a “tangible societal disrespect and disdain of women” which needed to be tackled.

Karin Pfolz has bitter firsthand experience of such attitudes. During the decade in which she was stuck in an abusive marriage, she frequently felt isolated, she told AFP.

“You don’t have anyone you can talk to, because there is so much shame and social stigma,” said Pfolz, who now speaks about her experiences in schools.

Criminologist Isabel Haider, of the University of Vienna, said that law enforcement officers also needed to be trained to respond more sensitively, as many women feel “police aren’t taking them seriously”.

It was a fear of not being believed that kept Pfolz from reaching out to the police. When she did eventually take her husband to court, she said that the — female — judge’s attitude reinforced the sense she wasn’t believed.

The Council of Europe’s human rights commissioner Dunja Mijatovic, on a recent visit to Austria, called for “an ambitious and comprehensive approach” to “protect women’s rights and gender equality”.

She noted the Austrian gender pay gap — just under 20 percent in 2019, according to Eurostat — is among the widest in the EU.

“When you leave, all you’ve got is a plastic bag in one hand and a child in the other,” Pfolz said. “You become a refugee in your own country,” she added.

But Pfolz knows that even when women are in the process of building a new life, they often still face threats from former partners. Her ex-husband would come to her new house and she remembered having to “lock myself into a room with my son because our lives were at risk”.

While she recognises that the issue of violence against women is now higher up the agenda, Pfolz still laments that “almost nobody even considers this a crime — until it turns to murder”.

This year was only a few days old before another shocking case hit the headlines — a 42-year-old woman shot in the head and killed by her husband at their dinner table.

If you are experiencing domestic violence, an English-language guide to the different support services on offer in Austria is available from the federal government by clicking here. The Women’s Helpline Against Violence is 0800 222 555.

A total of 205 people suspected to be linked to the group have been arrested in central and eastern Europe, while 80 vehicles have been seized, Interior Minister Gerhard Karner said.

Of the arrests, 92 of them were in Austria, and the rest in the Czech Republic, Hungary, Slovakia and Romania.

Investigators, who began looking into the case early last year, believe the group smuggled more than 36,100 people, including children, from Hungary to Austria.

With this they raked in an estimated 152 million euros ($159 million), making this the biggest operation uncovered in Austria in recent years, according to Karner.

“This is an important success against organised crime and a serious blow to the smuggler mafia,” Karner said in a statement. Those smuggled were trying to reach western European countries, including Germany and France.

They were brought to Vienna and then smuggled on through other groups, the statement said. In one incident linked to the group, the bodies of two people were discovered last October when Austrian authorities stopped and searched a van at the border with Hungary.

Twenty-seven others were crammed in the vehicle, whose driver fled the scene, but has since been arrested in Latvia and extradited, according to the ministry. In another incident in January linked to the group, an alleged smuggler fired at an army conscript when troops tried to stop his vehicle. The man has since been arrested in Hungary. Austria this week once again extended border controls on its frontiers with Hungary and Slovenia.

Such controls provide authorities “with important insights into smuggling organisations and their procedures,” Karner said.

The European Court of Justice in April criticised Austria’s long-term controls on its border to Slovenia. It ruled that EU member states can only prolong border controls when “confronted with a new serious threat affecting its public order or its internal security”.