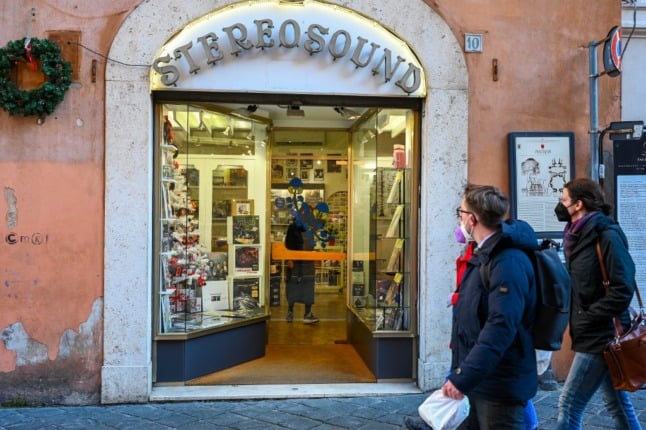 All except the most essential shops in Italy will soon have to ask customers to show a health pass under incoming rules.  Photo: Vincenzo Pinto/AFP

Starting next month, Italy’s green pass (either the ‘reinforced’ or ‘super’ pass showing proof of vaccination, or the basic version accessible via a negative test result) is expected to be made a requirement for entry to all businesses and venues except for essential shops and services such as supermarkets, national broadcaster Rai reports.

The government on Tuesday is holding talks on whether certain shops, such as newsagents and tobacconists, should require passes for entry.

The list of exempt businesses, set to be specified in a new decree this week, will reportedly include food shops, pharmacies, opticians and stores selling fuel.

READ ALSO: At a glance: What Covid-19 rules are now in place in Italy?

This will mean access to almost all businesses, service or venue in the country require some form of the health pass , after Italy tightened its rules on January 10th.

From that date, proof of vaccination against or recovery from Covid-19 (not a negative test result) has been required to access venues including restaurants, bars, hotels, ski resorts, museums, galleries, cinemas and sports stadiums, as well as all forms of public transport.

Italy has also made jabs mandatory for all over-50s who are resident in the country, with those who refuse to get vaccinated to face fines from February 1st. Some groups of workers including police and healthcare staff are also subject to a vaccination mandate. The green pass takes the form of a QR code that can be scanned and checked by public sector and service industry workers, who can face police fines for failing to enforce the rules.

It’s not yet known when the new decree will come into force. An announcement is expected later this week.

The new rules are expected to apply nationwide, regardless of the zone a region is in under Italy’s four-tiered system of risk classifications.

The Italian government is “reconsidering” the use of its system of white, yellow, orange and red ‘zones’, which has been in place since November 2020.

It’s not yet known whether the tiered system will be altered or scrapped altogether, as the government’s strategy for dealing with the pandemic relies increasingly on vaccinations rather than business closures and lockdown measures.

For the moment, the coloured tier system remains in place with most of the country designated a ‘yellow’ zone as of Monday.

Unfortunately, official proof of having recovered from Covid-19 won’t get you out of the requirement to self-isolate if you test positive for Covid while visiting Italy – though it can shorten your quarantine period.

The health ministry’s current rules state that anyone who tests positive while in Italy is required to immediately self-isolate for a minimum of seven days: that’s if the person in question is fully vaccinated and boosted, or has completed their primary vaccination cycle, or was certified as being recovered from Covid less than 120 days ago.

That period is extended to 10 days for those who aren’t fully vaccinated and boosted, or those who recovered from Covid or completed their primary vaccination cycle more than 120 days ago.

In either case, the infected person must have been symptomless for at least three days in order to exit quarantine (with the exception of symptoms relating to a lost sense of taste or smell, which can persist for some time after the infection is over).

READ ALSO: Travel in Italy and Covid rules this summer: what to expect

The patient must also test negative for the virus via either a molecular (PCR) or rapid antigen test on the final day of the quarantine in order to be allowed out.

Read more about getting tested while in Italy in a separate article here.

Quarantined people who keep testing positive for the virus can be kept in self-isolation for a maximum of 21 days, at which point they will be automatically released.

Italy does not currently require visitors from any country to test negative in order to enter its borders, as long as they are fully boosted or were recently vaccinated/ have recently recovered from Covid.

READ ALSO: How tourists and visitors can get a coronavirus test in Italy

Some countries (including the US), however, do require people travelling from Italy to test negative before their departure – which means visitors at the tail end of their journey could be hit with the unpleasant surprise of finding out they need to quarantine for another week in Italy instead of heading home as planned.

It’s because of this rule that a number of The Local’s readers told us they wouldn’t be coming on holiday to Italy this summer, and intend to postpone for another year.

If you are planning on visiting Italy from a country that requires you to test negative for Covid prior to re-entry, it’s a good idea to consider what you would do and where you would go in the unlikely event you unexpectedly test positive.

Please note that The Local cannot advise on specific cases. For more information about how the rules may apply to you, see the Italian Health Ministry’s website or consult the Italian embassy in your country.

You can keep up with the latest updates via our homepage or Italian travel news section.