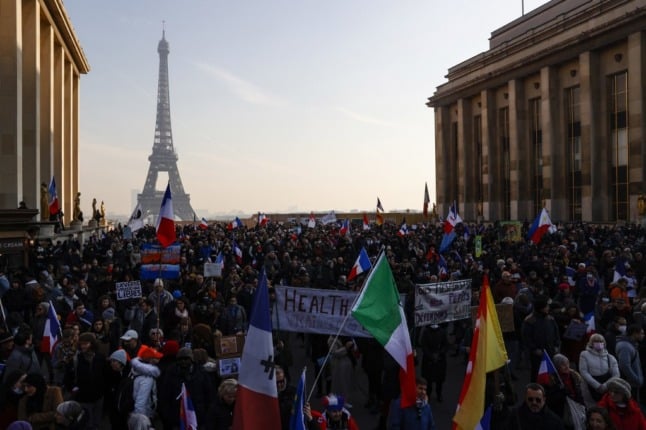 Protesters gather to demonstrate against the health pass and Covid-19 vaccines, on Trocadero plaza in Paris. Photo by Geoffroy VAN DER HASSELT / AFP

Turnout was significantly lower than the previous weekend’s demonstrations according to official estimates, with interior ministry
estimates putting the national figures at half that of last week.

In the capital Paris, the largest single gathering set off from near the Eiffel Tower, called by far-right anti-EU presidential candidate Florian Philippot.

Other demonstrations harked back to the 2018-19 “yellow vests” protests against President Emmanuel Macron’s perceived favouring of the wealthy.

There were also marches in major cities including Bordeaux, Toulouse and Lille.

READ ALSO: How the rules of the French health pass change on Saturday

People in the crowd chanted “no to the vaccine” or “freedom for Djokovic”, seizing on the case of men’s tennis number one Novak Djokovic, who is fighting the Australian government to compete unvaccinated in next week’s Grand Slam Australian Open.

“Novak is kind of our standard-bearer at the moment,” demonstrator Pascal told AFP in Bordeaux.

He was marching alongside parents with children at a tennis club in the western city, where he said the coach risked losing his job for refusing vaccination.

In Paris, demonstrators bore French and regional flags, with banners bearing messages like “it’s not the virus they want to control, it’s you”.

“It’s Nazism, it’s apartheid, I haven’t been jabbed and I’m against vaccines in general,” said Claire, a demonstrator in her sixties.

Two others, Laurence and Claire, told AFP they were vaccinated “but we’re against the pass for teenagers. We don’t see why they’re being vaccinated because they aren’t in danger”. Protesters gather to demonstrate against the health pass and Covid-19 vaccines, on Trocadero plaza in Paris. Photo by Geoffroy VAN DER HASSELT / AFP

According to figures gathered by the police and released by the interior ministry Saturday, the turnout was 54,000 across France, compared to 105,200 a week ago.

Demonstrators had hoped to keep up the pressure after Macron’s declaration earlier this month that he wanted to “piss off” the unvaccinated with new restrictions until they accepted a coronavirus shot.

The latest stage of that policy came into force Saturday. The government-issued “health pass” has been deactivated for tens of thousands of people who have not received a booster vaccination within seven months of their first course of shots.

READ MORE When will my French health pass deactivate?

The pass is required for access for everything from bars and restaurants to cinemas and other public buildings, as well as for travel on France’s high-speed rail network.

The government is working to transform the health pass into a “vaccine pass”, under a bill currently being debated in parliament, which will require proof of vaccination.

Negative coronavirus tests or proof of recovery from a bout with Covid-19 will no longer be enough.

The tougher measures have been pushed hard by the government as it faces a wave of infections with the faster-spreading Omicron variant.

On Friday, 330,000 new Covid-19 cases were confirmed in France, with an average of almost 300,000 over the preceding week. But the pressure on hospitals has not grown at the same pace.

MPs in the National Assembly passed the vaccine pass bill to the Senate upper house in the early hours of Saturday.

It is likely to be finally passed Sunday after back-and-forth between the two houses over questions such as the minimum age for the pass and whether proprietors should be empowered to check customers’ identities.

Members of the public in France have been asked to wear face masks for the most part of two years, at times even outside in the street.

Since March 14th, 2022, the facial coverings have no longer been mandatory in most establishments such as shops, and as of Monday, May 16th, it will no longer be mandatory on indoor public transport.

As of May 16th, you will therefore no longer be required to wear a mask in the following transports:

Regarding airplanes whether or not you must wear a mask is a bit more complicated.

On Wednesday, May 11th, the European Aviation Safety Agency (EASA) announced that from May 16th onward it would no longer be required to wear a mask in airports and on board aircraft in the European Union. However, Germany has stated that it does not have the intention of lifting its requirement of wearing a mask on its airlines – this would include the Lufthansa airline. Thus, it will be necessary for passengers to still very to rules each airline has in place, which could be the case when travelling to a country that still has indoor mask requirements in place.

EASA Executive Director Patrick Ky specified that vulnerable people should continue to wear masks, and that “a passenger who is coughing and sneezing should strongly consider wearing a face mask, to reassure those seated nearby.”

However, it will still be mandatory for caregivers, patients and visitors in health care facilities, specifically including hospitals, pharmacies, medical laboratories, retirement homes, and establishments for the disabled.

For people who are vulnerable either due to their age or their status as immunocompromised, wearing a mask will continue to be recommended, though not required, particularly for enclosed spaces and in large gatherings.

Masks are also still recommended for people who test positive, people who might have come in contact with Covid-19, symptomatic people and healthcare professionals.

Will masks come back?

It is possible. French Health Minister Olivier Véran does not exclude the return of mandatory mask-wearing, should the health situation require it.

What are the other Covid-19 restrictions that remain in place?

The primary restriction that has not changed is the French government’s regulation for testing positive: If you are unvaccinated and test positive, isolation is still required for 10 days, if you are vaccinated, this requirement is seven days. Isolation can be reduced from 10 to 7 days or from 7 to 5 days if a negative covid test is performed, and symptoms are no longer present.

The French Health Ministry still recommends following sanitary measures such as: wearing a mask in places where it is still mandatory, hand washing, regular ventilation of rooms, coughing or sneezing into your elbow, and using a single-use handkerchief (tissue).