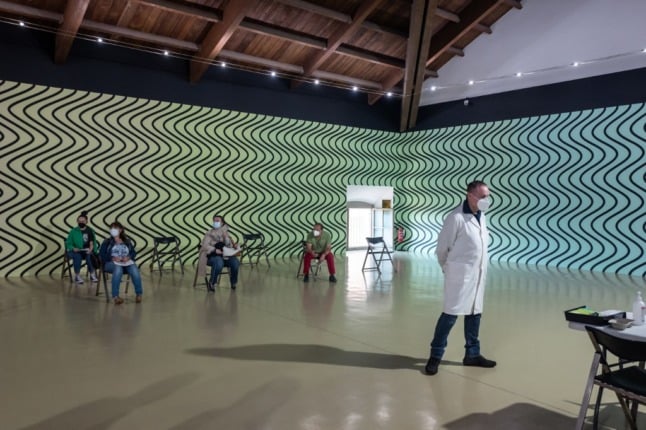 Italy could be out of the pandemic by spring, according to an Italian virologist. Photo by Marco BERTORELLO / AFP

As Italy hit a new record daily number of vaccinations this week, one Italian virologist predicted the high vaccination rate could mean the country is “out of the pandemic” by spring.

Italy administered a record 686,000 anti-Covid vaccines in one day on Tuesday, Covid-19 emergency commissioner Francesco Figliuolo confirmed in an announcement issued on Wednesday,

This means 86.5 percent of the eligible population over 12 years old has now been fully vaccinated against Covid-19, according to the latest data available on Wednesday.

“Already in spring, between April and May 2022, we will reasonably be out of the pandemic,” Matteo Bassetti, director of the Infectious Diseases Clinic in Genoa, told Rai Radio1 on Wednesday.

“I believe that in Italy today 10-15 percent (of people) are positive, so about ten million people, and by spring more than one in two will be infected,” he added.

“I hope this means we will be able to remove masks, since I believe we will have 95 percent of vaccinated people,” he stated.

Masks are currently mandatory in outdoor as well as indoor public places across the whole of Italy until at least January 31st.

Italy hit another record on Tuesday with 220,532 new Covid infections, according to data from the health ministry, while rising hospitalisation rates are likely to push four regions into the more restricted ‘orange’ zone by Monday.

The Italian government announced a revision of the coronavirus quarantine rules under a new decree law last month.

Quarantine is no longer required for close contacts if they have had a booster dose, or were fully vaccinated or recovered within the last four months (120 days).

But, seemingly referring to the quarantine requirement for those who have had two doses more than four months ago, Bassetti criticised the rule as “stupid”.

“If I had had to do (quarantine) for every contact I had, I would have had to stay at home since last February,” he added.

Vaccines also prevented eight million cases of Covid-19, over 500,000 hospitalisations, and more than 55,000 admissions to intensive care, the ISS said in a press release announcing the publication of its report.

The report covers the period between December 27th, 2020, when the vaccination campaign began, and January 31st of this year, using a methodology initially developed for flu vaccines.

Italy has been one of the countries worst affected by the  pandemic, with more than 160,000 deaths reported since February 2020, the second-highest toll in Europe after Britain.

To date, almost 90 percent of the population over the age of 12 has been fully vaccinated, as well as just over 34 percent of children aged five to eleven.

Italy on Tuesday began offering a fourth dose of an anti-Covid 19 vaccine to those deemed at highest risk from the disease, including over-80s and care home residents.