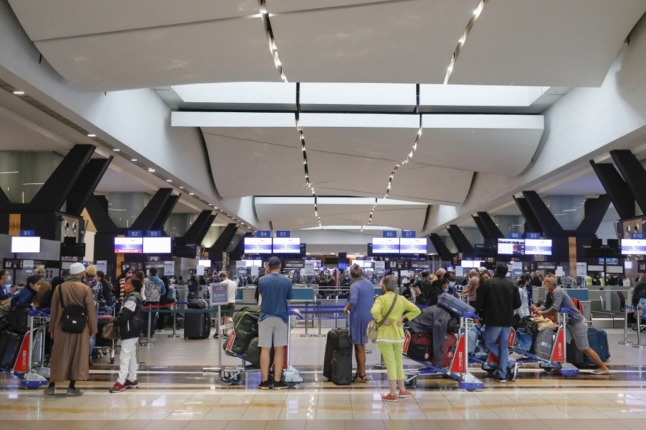 Restrictions have been loosened for vaccinated travellers coming from South Africa to France. (Photo by Phill Magakoe / AFP)

South Africa was one of 10 countries put on the newly created ‘scarlet list’ in December, over fears of the Omicron variant – the list imposed extremely tough restrictions on travel, within even fully vaccinated people only allowed to travel if they fit one of the narrow criteria for ‘essential journeys’.

But the French government issued a decree on Thursday moving South Africa, Lesotho and Eswatini from the “scarlet” list to the “red” list. Botswana, Zimbabwe, Mozambique, Namibia, Malawi, Zambia and Maritius had previously been moved to the red list, meaning there are currently no countries classified as ‘scarlet’.

The UK is not technically classified as scarlet, but France has also imposed harsh restrictions that ban virtually all travel – although there are signs that these too could be relaxed soon.

People travelling to French overseas territories like Mayotte or La Réunion still need to have an “essential reason” for travel, whether vaccinated or not. Tourism is not deemed an essential reason for travel.

South Africa had been placed on the “scarlet red” list in November because of soaring Omicron cases in the country – but France now has record Omicron cases of its own. While France recorded 335,000 new Covid cases in 24 hours on Wednesday, South Africa is hovering at around 11,000 new daily cases – although it does test significantly less.

The decision to remove South Africa from the ‘scarlet’ list comes after France has announced it would also be loosening travel restrictions on people coming from the UK.

Speaking after the regular meeting of ministers on Wednesday, French government spokesperson Gabriel Attal said that France government had “decided to expand the list of compelling reasons – in particular professional reasons.”

Attal did not specify exactly when this change would come into place but floated the idea that it could come as soon as next week.

The next key date in the tourism calendar is the February school holiday, a time particularly important for the ski industry, where resorts are usually busy with both domestic and international visitors.

Easyjet announced on Thursday that it would have to cancel several dozen flights, many of which were set to depart from French airports like Paris Charles de Gaulle, Lyon, Toulouse and Nice.

The British budget airline tweeted an apology to the customers impacted, explaining that ‘IT system issues’ were to blame.

We apologise to all customers whose flights have been affected by IT system issues. You can check your flight status here >>> https://t.co/z1q01rpz7Z

In total, 200 flights across Europe were affected, confirmed the British newspaper The Independent.

Several customers expressed frustration at the hours-long wait times, many taking to Twitter to vent, like this user below:

Easyjet has not been very specific about the issue aside from explaining that the root of the problem was a computer system failure. They announced quickly that they were working to restore their systems and that in the meantime customers should continue to check Flight Tracker in order to verify the status of their flight prior to leaving for the airport.

While flights were set to resume on Friday, Thursday’s cancellations have had a domino effect, bringing about further delays and cancellations for flights originally scheduled for Friday.

If you have flights booked, it is best, as stated above, to keep an eye on Flight Tracker in order to avoid potentially long wait-times at the airport.

Will passengers be compensated?

While Easyjet initially explained the IT problem as “beyond [their] control” and an “exceptional circumstance,” the company eventually retracted these statements and released a new statement saying that “Customers can request compensation in accordance with the regulations.” Here is the link to their website to find out more.

If you plan to request a refund, be advised that under European regulation for air passenger rights, travellers should be entitled to compensation between €260 to €410 per person depending on the duration of the flight, with the latter representing flight distances of over 1,500 km. Read more here.

Since Brexit, passengers departing from the UK may no longer be covered by the European compensation rules.