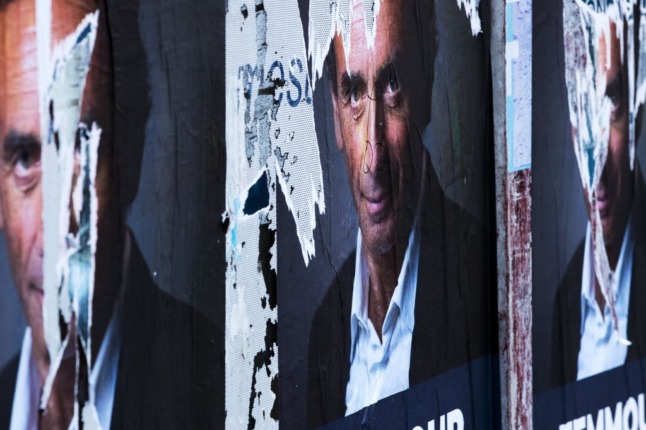 A torn poster of the French far-right media pundit and presidential hopeful, Eric Zemmour in Paris. A group that beat up anti-racism demonstrators at one of his rallies has been banned. (Photo by JOEL SAGET / AFP)

“The group ‘Zouaves Paris’ was banned this morning at a cabinet meeting, in line with the instructions of the President” Emmanuel Macron, Interior Minister Gerald Darmanin wrote on Twitter, saying the group had incited “hatred and violence”.

The decree prohibiting the group, founded in 2017 and believed to have only around 20 hardcore members, said it “propagated an openly racist discourse” that included “symbols of Nazi ideology” and “white superiority”.

Members were accused of assaulting activists from SOS Racisme at the December 5 rally by Zemmour shortly after the controversial pundit announced his candidacy for the 2022 presidential elections.

Its leader Marc de Cacqueray-Valmenier, 23, was detained and charged with assault. The group takes its name from elite units of French troops who fought in Africa in the 19th century.

Zemmour is accused by opponents of being a racist, an allegation he denies. He has repeatedly however criticised Islam and immigration, which he says are harming French identity.

The rally was marked by clashes with anti-racism activists, and Zemmour himself was at one point put in a headlock and suffered an injury to his wrist.

Zemmour’s campaign enjoyed a surge in popularity ahead of the declaration of his candidacy, but it appears to have slackened in recent weeks, although most polls still predict he will win around 15 percent in the first round.

He is currently facing a struggle to muster the 500 signatures needed from French mayors to formally register his candidacy.

READ MORE Could a French electoral rule stop Zemmour from running for president?