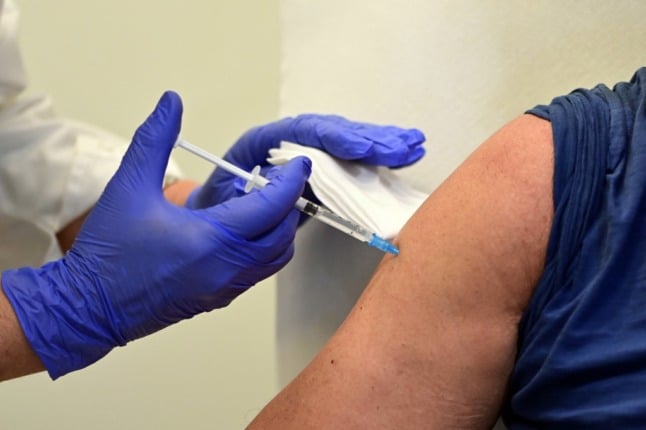 A health worker administers a dose of the Johnson & Johnson vaccine (Janssen) against the Covid-19, on August 5, 2021 at the Ambreck pharmacy, in Milan, during a vaccination campaign on people over 60 years. (Photo by MIGUEL MEDINA / AFP)

“The government voted unanimously to gave the green light a new decree that will make Covid-19 vaccinations mandatory for all over 50s,” the ANSA news agency reported.

“We want to slow down the curve of contagion and encourage Italians who have not yet been vaccinated to do so,” Prime Minister Mario Draghi said during a cabinet meeting at which the measure was adopted, according to a statement.

“We are working in particular on the age groups that are most at risk of being hospitalised, to reduce pressure on hospital to save lives,” he added.

The new decree obliges people over 50 who do not work to get vaccinated, and those who do work to obtain a vaccine pass — which effectively covers all over 50s.

The new measure makes Italy one of very few European countries to make vaccination compulsory for a section of the general public. Austria announced in November it would make Covid-19 vaccines mandatory from February in a bid to tackle low vaccination rates.

In another statement, the government said that “the vaccine pass (super green pass) will be necessary for people over 50 in the public and private sectors to access their workplace from February 15th.”

The ‘super’ or ‘reinforced’ green pass health certificate, which proves vaccination or recovery, has already been made compulsory for access to almost all leisure, social or sporting activities in the country.

The obligation will be effective until June 15th, according to an earlier draft version of the decree.

READ ALSO: How will Italy enforce its vaccine mandate for over-50s?

Italy has reported record Covid infections in recent days with another 189,000 cases registered on Wednesday.

Out of Italy’s 59 million people, 28 million are over the age of 50, according to the Istat national statistics agency.

Late last month the government said that from January 10th a “super green pass” would be required to use public transport and access hotels, restaurant terraces and gyms.

Previously a green pass giving proof of vaccination — or a recent negative test — had been required.

A total of 1.4 people are currently positive in the country.

Italy was the European country first hit by the pandemic in early 2020 and still has one of the highest death tolls, at more than 138,000.

Vaccines also prevented eight million cases of Covid-19, over 500,000 hospitalisations, and more than 55,000 admissions to intensive care, the ISS said in a press release announcing the publication of its report.

The report covers the period between December 27th, 2020, when the vaccination campaign began, and January 31st of this year, using a methodology initially developed for flu vaccines.

Italy has been one of the countries worst affected by the  pandemic, with more than 160,000 deaths reported since February 2020, the second-highest toll in Europe after Britain.

To date, almost 90 percent of the population over the age of 12 has been fully vaccinated, as well as just over 34 percent of children aged five to eleven.

Italy on Tuesday began offering a fourth dose of an anti-Covid 19 vaccine to those deemed at highest risk from the disease, including over-80s and care home residents.