Here, The Local examines the falling cost of sending 1,000 Swedish kronor from Sweden to 12 different destinations, including countries in Asia, Africa, the Middle East and South America. We look at the latest available data from online money transfer comparison service Money from Sweden – for November 2021 – and compare it with their data from December 2015.

Cutting remittance fees on international transfers is a UN Sustainable Development Goal – and that’s why the Swedish government set up Money from Sweden. The service is run by the Swedish Consumer Agency and is completely free for users.

Want to know which of the 12 countries have seen the biggest reductions in average costs? All will be revealed! Read on, and then explore our interactive map at the end of the article.

With almost any financial transaction, it pays to shop around a little. That’s why all the figures in this article relate to the average of the three cheapest services for sending money to a destination country. This removes the most expensive providers (which are used by few people) and gives you a realistic picture of what a competitive cost is today – and how it has changed in recent years.

Let’s start with the world’s two most populous countries: China and India. Both have seen significant progress over our comparison period.

Sending 1,000 kronor from Sweden to China with one of the three best providers cost just 2.23 percent in November 2021 – less than half the 4.77 percent average back in December 2015. For India, the cost to the sender has fallen from 3.91 percent to just 2.28 percent over the same period.

More progress from Turkey to Thailand

A number of other countries, some of which are regularly searched on Money from Sweden, have also seen significant reductions in costs.

Do you send money to Turkey? The fall in your costs since December 2015 (from 3.99 percent to 2.68 percent) is not too far behind that of India. What if it’s Thailand you wish to send money to? You’ve seen a similar change to your advantage over this period and can now expect to pay just 2.12 percent, down from 3.29 percent at the end of 2015.

If you want to send 1,000 kronor to Lebanon, shop around and the transaction is likely to cost you only around half what it would have done six years ago (4.27 percent, down from 8.74 percent). Afghanistan (a fall from 4.88 percent to 4.05 percent) and Ethiopia (4.85 percent to 4.59 percent) are also becoming cheaper, even if progress isn’t quite so rapid as with some countries. So which countries have seen the biggest cost reductions?

Some countries, which had higher costs to begin with in 2015, have seen huge reductions in the costs of money transfers from Sweden over the past six years. They include countries across the globe, from Southeast Asia to South America to Africa to the Middle East – see our interactive map at the bottom of this page, covering the 12 countries featured in this article.

Overall, the data shows falling costs for the vast majority of countries with just a few exceptions among countries affected by internal turmoil; Syria, for instance, has seen costs almost double over this period to 9.15 percent in November 2021.

In an age of fintech, money transfers are becoming more competitive in many countries and increasingly transparent (at least with some providers). But with so many options, it can be extremely difficult to feel confident you’re getting the best deal possible.

Money from Sweden is completely free to use and certified by the World Bank. The site allows you to make fast and simple comparisons of what you’ll pay through different service providers to send 1,000, 3,000 or 5,000 kronor to 42 different countries. You can choose to use the comparison tool in English, Swedish or Arabic (with information about the service available in other languages too).

Thinking of sending money abroad? Compare prices and find the best deal for you with Money from Sweden’s free online service 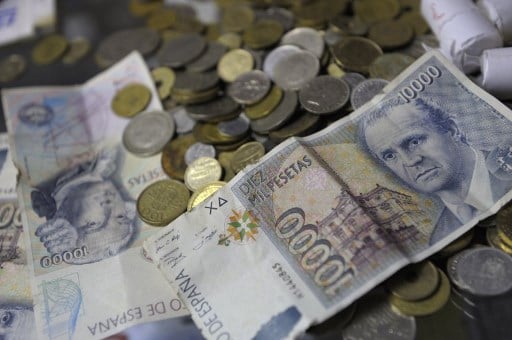 Old peseta notes and coins can be exchanged until the end of 2020. Photo: AFP

The Multipaterna Commerce and Services Association has launched a campaign that allows payment to be made with pesetas in certain establishments in Paterna, a town in the Valencian Community.

For the rest of Spain those who still have the old currency there is still a few months left to convert them into euros, although they can’t spend them in shops.

Spaniards have been told that they have until December 31st 2020  to exchange their pesetas for euros and that applies for both bank notes and coins.

Any notes produced during the Franco era, which ran from the end of the Civil War in 1939 until the dictator's death in 1975 can be automatically changed by the Bank of Spain.

Those issued during the conflict can also be exchanged but the process will involve them being analysed by experts to confirm their authenticity.

And any coins still in circulation at the time that euros were brought in on New Year's Day in 2002 can also be exchanged at Bank of Spain headquarters in Madrid.

The exchange rate offered  by the Bank of Spain is 1 euro = 166,386 pesetas but the bank advised that commemorative coins and notes may be worth more as collectors' items than for their face value, which is all that will be offered in the exchange scheme.

The Bank of Spain estimates that pesetas worth some €1.61 billion are squirreled away in Spanish homes, cluttering up the drawers of old desks and trunks in dusty old attics.

Many will never see the light of the day and others have become collectors' items now worth more than their exchangeable value.

Spain adopted the Euro at the start of 2002 but pesetas were still legal currency during a transition period that lasted the first three months of that year.

Exchanges can be made in person at the Banco España building on Madrid's Calle Alcala or via a postal or online service, even available to those abroad.  For more information check out the official webpage of the Banco España HERE.

By Conor Patrick Faulkner in Valencia